Video: 2011 Ford Fiesta gets its own iPad app 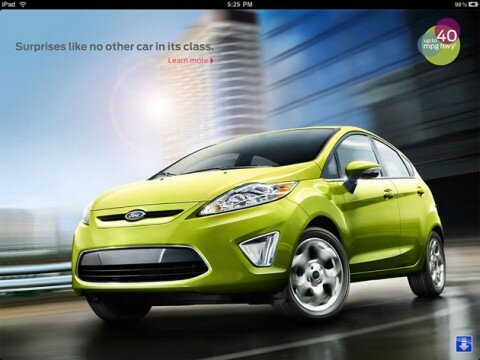 While car companies are launching dedicated iPhone applications for some of their more popular models, Ford is going one step further, and has released a dedicated iPad app for the 2011 Fiesta model.

The new app is basically a full pledged brochure, and allows customers to read all about the Fiesta’s technologies, safety systems, performance and features. You can also watch videos of the Fiesta in action and interact with things like a virtual center console.

The new iPad app is already available on the iTunes store, and has also been showcased in a video by Ford itself. See it in action after the jump.
END_OF_DOCUMENT_TOKEN_TO_BE_REPLACED


Hyundai peaked our interest a few weeks ago when it revealed a groovy sketch with an all-new model, the ix20 compact MPV.

Now, before its scheduled debut at the Paris Motor Show near the end of the month, the blokes at Autocar have revealed the first official photos of the new lightweight people carrier.

As you can see, while it doesn’t look like the sketch in some areas, the ix20 is still quite a looker, sporting the fluidic sculpture design previously seen on other new models like the Sonata or the Tucson (ix35).

Hyundai wants the ix20 to be the reasonable choice in its market segment, and adds a lot of standard options including A/C, Bluetooth connectivity, a stop/start system and more safety features than you can shake a crash test dummy at.


Expect the Hyundai ix20 compact MPV to make its debut in Paris and appear in dealerships across Europe in November. So far, the South Korean automaker has declined to talk about a possible US release.


Chevrolet is continuing its long strain of reveals before the start of the Paris Motor Show at the end of the month. After showcasing the new Orlando MPV and the Cruze hatchback, the new 2011 Chevrolet Aveo has finally been revealed.

As you can see, the new compact hatchback is quite a looker, even though its design was leaked in a few renders and patent sketches. The new generation Aveo promises to start clean and, thanks to a new and enlarged platform, will provide adequate space for anyone in the market for a small hatchback.

The new model will also be pretty potent, considering the engine lineup it will get for the European market. The smallest is a 70 HP 1.2-liter gasoline, and the largest is a 115 HP 1.6-liter gasoline four-cylinder engine. Diesel fans will also be able to enjoy two versions of a 1.3-liter unit, capable of 75 and 95 HP, both equipped with Stop/Start systems. Manual five- and six-speed gearboxes are available, while the 1.6-liter gets a six-speed automatic as an option.


The Chevrolet Aveo set to be revealed in Paris will be a show car, as modifications will be made for each market the tiny compact will be sold in. Expect it to debut on the US one around the end of next year, in both hatchback and sedan form, in order to rival the Ford Fiesta.

END_OF_DOCUMENT_TOKEN_TO_BE_REPLACED


General Motors’ Buick lineup is becoming extremely solid, thanks to modern models like the Lacrosse or the Enclave, as well as with the leader of the new revolution, the 2011 Regal.

But GM isn’t done with the Tri-Shield brand, and according to Automotive News, will launch a compact sedan in 2012, called the Buick Verana.

We’ve already heard these rumors before, but this time it is extremely likely that Buick will get a more compact model in the range. Patent shots have already emerged, and the Opel Astra/Chevrolet Cruze-based Buick Excelle (pictured above) has already been launched in China.

Alongside the Verana, GM is also planning a hybrid Lacrosse model, which will attract green-minded people to the Buick range.


A new batch of rumors have appeared concerning Mazda and, this time at least, it doesn’t have anything to do with the oft-rumored RX-7 revival.

Instead, it seems that the Japanese company wants to finally expand its lineup into the compact crossover segment, by launching the CX-5.

It seems that the automaker wants to make good on the Kazamai concept it showcased a few years ago, and will introduce a smaller model into its CX range, currently represented by the CX-7 and CX-9. This crossover would attack this ever growing market segment with an aggressive design and a frugal attitude.

The design will no doubt be inspired by the Kazamai concept you see above, while the frugality and efficiency are courtesy of Mazda’s new SKY range of engines. The CX-5 will also be lightweight, as Autocar suggests that it will be 220 pounds lighter than its competition.

These are just rumors at the moment, but considering the big sales crossovers are experiencing, Mazda can’t afford to not get in on the action.


Mini sources have confirmed that the brand is now researching a compact city car model, in the vein of the Smart ForTwo, even though officials have said that such a vehicle isn’t profitable.

Why the sudden 180 degree turn? BMW is planning an all-out assault on the entry-level premium segment, with front-wheel drive cars smaller than the current 1 Series, but also on the city car market, with the Megacity electric vehicle project.

As such, the money is already set to be spent, on research and on a new three-cylinder engine. This means that in order to get its investment back, the Mini brand will also develops its own compact city car project.

No word on the exact specifications, like three/five doors or front/rear engine, but one thing’s for sure, it will be much shorter than the current Mini models. It won’t have Smart ForTwo dimensions, but it’s going to be easier to handle around the city, according to officials.

Don’t expect anything concrete in the near future, as those same sources revealed that a concept will be revealed around mid-2011.

END_OF_DOCUMENT_TOKEN_TO_BE_REPLACED

Video: Geely Panda compact shows off its wild side


Chinese car company Geely hasn’t really made a big deal of its models. When it did appear in the media, usually it was because it had copied designs from Rolls Royce or some other shameful thing.

Now, a new video presentation of its Panda compact (no relation to the Fiat Panda, we think) will definitely make up for all the bad things said about its cars.

In the video, a fleet of these tiny cars are shown doing some extreme stunt work, from going on two wheels, to backwards donuts, J turns and even popping a stoppie, just like with motorcycles.

If you really want to see how much fun a Chinese car can be, then hit the jump and find out.
END_OF_DOCUMENT_TOKEN_TO_BE_REPLACED


Fiat is still keen on expanding its compact car lineup, and has just revealed the Uno in Brazil.

The Fiat Uno will slot in, at least in terms of size, between the Panda and the Grande Punto models. It will be manufactured at the Fiat Betim plant, in Brazil, and, as usual in the South American country, will be offered with a variety of flex-fuel capable engines.


While the Uno is mostly intended to be a city car, a higher-riding ‘Way’ variant was also shown, decked out in ‘off-road-y’ plastics. No word yet on whether or not this new compact model will be making its way to other territories though.


As the Beijing Motor Show is nearing its start date, we’re being assaulted with new concepts that will be showcased by local carmakers at that event.

Among them is the small model you see above, the JAC IV, which likely previews a rival for the Smart ForTwo and other two-seater compacts. It was designed at the company’s Italian bureau, and, at least at first glace, combines quite a lot of styling cues from the Toyota iQ, the Mazda “smiling” grille and other such elements.


Not a lot of details were revealed by the Chinese company, but it seems tat a hybrid powertrain lies beneath the bonnet, combining a small gasoline engine and an electric motor, resulting in great fuel efficiency and low emissions.

The jury’s out on whether or not this Chinese concept is actually going to be any good, so we’ll wait until the Beijing Motor Show.


The Los Angeles Auto Show has already closed its doors and big carmakers are preparing their new models for the 2010 North American International Auto Show, or simply put, the Detroit Auto Show.


With the recent rush of all-electric or hybrid small cars, Toyota’s move makes sense, as the Prius can’t contend with cars like the Mitsubishi i-Miev or the upcoming electric cars from Renault. All we can do is wait until the Detroit show begins on January 11 to feast our eyes on the new compact hybrid from the Japanese company.

2012 Opel Allegra officially confirmed by Opel, to be based on Trixx concept


After revealing a few days ago the rumors about Opel working on a little brother for the Corsa compact hatchback, the Germany company has come out with a statement in which it confirms its development of the future Allegra entry-level compact city car.

Set to be launched in 2012, under the current Agila and Corsa models, the Allegra will be based on the older Trixx concept, presented in 2004 and pictured above. This was confirmed by Opel’s marketing director, which revealed that the model will be a result of a joint-venture between the German company and another manufacturer, which wasn’t revealed.


No further pieces of information were given, and we’re left to speculate on what types of engines will the Allegra use or if a hybrid or an electrical version will be made, using the know how from the future Opel Ampera.

Are you excited about yet another compact city car to make driving in a crowded urban environment that much more “exciting”? Don’t be shy to drop a comment.

END_OF_DOCUMENT_TOKEN_TO_BE_REPLACED


Not content with the good stance of its entry-level 1 Series model on the premium hatchback market, it seems that BMW will indeed be taking the platform of the Mini model and adapting it for its future 0 Series, according to a report by Car Magazine.

This entry, codenamed UKL1, which comes from Untere Kompaktklasse, meaning lower compact class, will be set to go head to head with other premium compact models, such as Audi’s A1 and Mercedes-Benz’s A Class models. It will also be borrowing another thing from Mini, which is body styles, as a three-door, five-door and coupe bodies are all set to be adorned by the future 0 Series. It is presumed that it will be released in 2013, and will benefit from completely new three and four-cylinder engines.

Whether or not this speculation is true, this is certainly an interesting path the Bavarian carmaker is taking. All we can do is wait and see if this new 0 Series will appear on the road.