It seems that starting with 2012; the Euro NCAP requirements are going to be tougher by implementing more stringent measures regarding pedestrian safety. From next year, 5-star cars will have to achieve at least a 60% score in pedestrian safety, up by 20% in comparison to this year.

As a consequence, none of the cars that they’ve tested in August would qualify for next year’s change; both the Audi A6 and the Vauxhall Ampera got a 41% score, while the Citroen DS5 obtained only 40%. The best car as far as pedestrian safety is concerned would have to be the VW Jetta, with 56%, but even this one fails to meet next year’s requirements by 4%.

All of the cars that Euro NCAP has tested this month received five starts overall, except for Kia’s Picanto model that got only four because of the fact that the Electronic Stability Control isn’t a standard feature on all the variants in all the European markets. However, the Picanto comes as standard with ESP.

It was only a couple of weeks ago when the Chevrolet Volt got top ratings for crash safety and now the National Highway Traffic Safety Administration (NHTSA) gave five stars to the car for overall vehicle safety. For those of you that don’t know, five stars is the maximum rating available.

To be more exact, the Volt earned five stars for side crash and rollover tests and four shiny stars for frontal collisions. NHTSA said the Chevrolet Volt comes as standard with electronic stability control, but it isn’t available with forward-collision warning or lane-departure. The agency increased the severity of the tests for the 2011MY cars due to the reason that lot of new models managed to do very well with the previous test regime.

These new modifications include the side-impact test that simulate a crash going on at 20 mph in a tree or a pole behind the windshield pillar on the driver’s side.

No word about NHTSA’s tests with the Nissan Leaf. We’ll keep you posted.

Well, it seems Volvo is still Volvo, the same manufacturer that introduces some of the safest automobiles in the world. The Swedish automaker managed to win the IIHS Top Safety Pick award for its new S60 model, given by the Insurance Institute for Highway Safety. In other words, the S60 was capable of getting top ratings in all the crash tests, including here front, side, rear and rollover evaluations. To be eligible for this award, a car must come as standard with ESP (electronic stability program).
END_OF_DOCUMENT_TOKEN_TO_BE_REPLACED 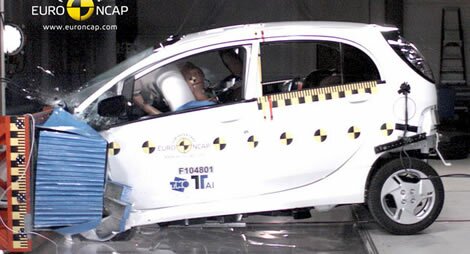 It was bound to happen sooner or later; Euro NCAP tested the first plug-in EV. The Mitsubishi i-MiEV is only the first of a series of EV crash-tests planned for 2011. Along with the i-MiEV, the European safety institute also tested other five conventional cars: the Nissan Juke, Mitsubishi ASX, Hyundai ix20, BMW X1 and the Dacia Duster.

The Mitsubishi i-MiEV managed to obtain an overall four star rating, just like its siblings – the Peugeot iOn and the Citroen C-Zero; all of them have the same design and safety equipment. Euro NCAP judged this result as “creditable.”

This EV was put to just about the same tests as a conventional car. Euro NCAP gave special attention to the car’s battery integrity after the moment of the crash and the functioning of the battery cut-off switch that isolates the high-voltage battery in the event of an accident. The good news is that no fire or electrical hazards were detected while testing the Mitsubishi i-MiEV. 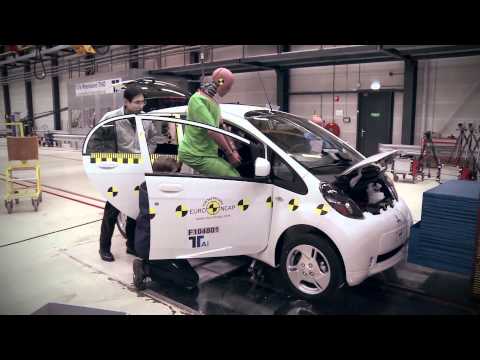 As we mentioned before, other cars were tested and all of them got a five star rating, except for the Dacia Duster, a Romanian SUV. The car got only three stars mainly because it scored only 28% in pedestrian protection and 29% for safety assist. Despite these low ratings, the Duster offers more protection to adult passengers than the Mitsubishi (74% vs. 73%), and the child protection was at the same level – 78%.


I’m sure most of you had the time to digest the newest results from the EuroNCAP crash tests, and see which new cars are the safest to be in in the unfortunate case of an accident.

But one of the biggest surprises was the Toyota’s Urban Cruiser, which achieved just a three-star safety rating, out of the five maximum. The area in which the car didn’t do well was the side impact with a pole. Right after the independent organization posted the results, the Japanese carmaker was quick to dispute them.

“Toyota gives priority to building cars that are as safe as possible,” said a spokesman. “In 2009, we received a five-star rating for all three new cars that were evaluated by Euro NCAP (iQ, Avensis and Prius). We are therefore very surprised that the Urban Cruiser received only a three-star rating from Euro NCAP. As with any other Toyota vehicle, we had submitted the Urban Cruiser to rigorous in-house tests, which indicated that it would secure a five-star rating. We are currently investigating the Euro NCAP result in detail, in order to understand why there is a difference between our Toyota assessment and Euro NCAP’s rating.”

The man continued and revealed Toyota will ask to see the concrete data from the crash tests and see just how its safety systems weren’t up to par, according to the organization. While this may seem like corporate bickering, for the people who bought Urban Cruisers and are keen on safety, the problem is serious. For what it’s worth, the spokesman concluded with: “Once again, we remain fully convinced that Urban Cruiser is a safe car.”

END_OF_DOCUMENT_TOKEN_TO_BE_REPLACED

Mercedes-Benz has just released a new video in which its newest supercar, the SLS AMG, is being crash tested at its safety labs.

The brilliant supercar is being subject to all kinds of damage, and, from what we can see, manages to keep its inhabitants quite safe, even under the most extreme conditions. But while many of its buyers won’t pay much attention to its safety options, much rather preferring the performance ones, especially the massive 6.2-liter V8 engine, it’s good to know that it is a safe car.

Hit the jump to see the video.
END_OF_DOCUMENT_TOKEN_TO_BE_REPLACED


The Ferrari 458 Italia is the newest model from the Italian supercar maker which will replace the extremely popular F430 and take performance and style to a whole new level for the people who are rich enough to own one.

But before the launch of the car, which happened at the Frankfurt Motor Show, the Italian company put it through its paces, which included besides endurance testing, a lot of crash tests, in order to ensure that the passengers will escape with the least amount of injuries.


The result of these tests? Images, took by the guys from WreckedExotics, that will make plenty of Ferrari fans shed a tear. Multiple Italias lay under wrap after being subjected to some serious punishment. Some of them were involved in front and rear collisions while some of them got into side crashes.

END_OF_DOCUMENT_TOKEN_TO_BE_REPLACED

In the late 1940s the U.S. Air Force needed to study the safety of aircraft ejection seats. Before developing a safe way of doing this, they used real people. Colonel John Paul Stapp, an Air Force doctor, was among the first “human test dummies”. He was propelled with rockets down a 2,000-foot railroad track and then brake instantly (during this time his body was subjected to 46.2 G).

One year later Hybrid III crash test dummy appeared – the first family man. In his family there was a female, and ten, six, and three-year-old child dummies. After this dummy family it appeared SID (Side Impact Dummy – for rib, spine, and internal organ effects in side collisions), BioRID (design for effects of a rear impact), CRABI(a child dummy for seat belts and air bags tests) and THOR, one of the most advance crash test dummies with a human like spine, pelvis and a big number of sensors for the analysis of facial impact.

Photos after the jump.
END_OF_DOCUMENT_TOKEN_TO_BE_REPLACED

Surprise! US tests show Smart ForTwo not so safe

After its US market debut in January, the Smart ForTwo was a big success for Mercedes with customers lining up to get the German little guy. The car’s fuel efficiency, its great image and the small size which makes it a perfect urban car, made Smart sell very well (almost 4,000 units sold so far and 30,000 reservations). However, its small size is also a big disadvantage and many were expecting the safety tests’ results before deciding to buy the car. And the news aren’t good at all.

The National Highway Traffic Safety Administration (NHTSA) released the first results of the crash tests and these aren’t doing Smart any favors, because, during side tests, the driver door unlatched and opened and officials said that this could lead to a driver or passenger being ejected from the car. So the Smart ForTwo got a 4 stars rating for driver safety and only 3 stars for passenger safety. And that’s not all, because the crash test were made using a car similar in size with the Smart. Imagine what would be the results in case of a crash between a Smart and, I don’t know, a Chevy Suburban.

Even though it’s equipped with a steel safety cage, four standard air bags (two in front and two on the sides, for the head and abdomen) and it has standard Electronic Stability Control, the Smart still isn’t a safe car and shouldn’t come as a surprise to anyone. I mean, c’mon, the car’s 8-foot, 8-inch and it weights 1,800 pounds.

END_OF_DOCUMENT_TOKEN_TO_BE_REPLACED

Here are the results from the latest crash tests made by Euro NCAP. Both the Volkswagen Tiguan and the Ford Mondeo had the same performances, scoring 5-stars ratings at adult protection, 4-stars for child protection and 2-stars for pedestrian protection.

Also tested were the Hyundai i30 and the Volkswagen Caddy ‘Maxi’, both receiving 4-stars ratings.

Remember that the Ford Mondeo and the Hyundai i30 are contestants in our European “Car of the Year” Competition.
END_OF_DOCUMENT_TOKEN_TO_BE_REPLACED

Latest Euro NCAP tests had some pretty interesting results. First of all, it’s the first time Kia achieves a 5-star rating, the Cee’d having an overall score of 34 points. Second of all, Peugeotâ€™ proves once again that it makes some of the safest cars on the streets, with the new 308 joining Peugeot’s 1007, 207 and 407 5-stars rating. In the child protection tests both models were awarded with 4 out 5 stars while in pedestrian protection, the Ceeâ€™d got a mediocre 2-star rating (out of 4) and the Peugeot a 3 star rating.
END_OF_DOCUMENT_TOKEN_TO_BE_REPLACED