Guess that the Presidential Car isn’t so invincible after all. Barack Obama’s Cadillac limo got stuck yesterday at the US Embassy exit in Ireland because of its length.

This eight tons bullet/missile-proof rolling tank had difficulties crossing over a kerb outside the US Embassy in Dublin. The crowd who witnessed the moment didn’t miss the chance to record the fail-worthy event.

At least we know why the russians were laughing about so hard these past days. 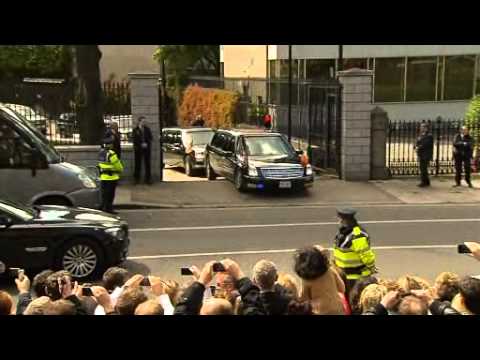 
The BMW X5 is definitely a pretty capable SUV, as highlighted when it mounted several cars while being driven by a woman from Canada.

Now, the X5 is put through its paces as a make-shift stunt car, with an owner trying to jump and/or flip it in mid-air. For our amusement, he decided to film the whole attempt, which, as you can imagine, didn’t exactly go so well.

Check out the failed stunt attempt in a video after the jump.
END_OF_DOCUMENT_TOKEN_TO_BE_REPLACED


Ah yes, we’re pretty sure a lot of you have been wanting a new burnout fail for quite some time.

After seeing a Dodge Neon or a Chevrolet Corvette fail at such things, this time we’re talking about an older Honda Civic hatchback.

Contrary to previous burnout fails, this time the guy actually managed to keep the stunt going. Sadly, it seems the car couldn’t handle all that pressure and burst into flames.

Check out the awesome footage after the jump.
END_OF_DOCUMENT_TOKEN_TO_BE_REPLACED


A Shanghai Porsche Boxster owner decided to really showcase the more practical aspects of his convertible sportscar, and parked the car right on the stairs leading to a road underpass in his own city.

The guy took advantage of the small width of the Boxster and had absolutely no problem leaving the sportscar on those stairs (he even left some room for the actual pedestrians!).


So, what do you think of his ingenuity? Parking fail or resourcefulness win? Share your thoughts in the comment section below.

END_OF_DOCUMENT_TOKEN_TO_BE_REPLACED

Audi A1 flips during marketing stunt


As we said time and time again, Audi is pulling out all the stops in order to ensure its newest model, the tiny A1 gets remembered by its target audience.

From the constant teasers before its official release to the ‘Next Big Thing’ short film series, we were treated to quite a few marketing stunts. Sadly, at least for Audi PR people, a stunt that took place in Brussels, Belgium, went awfully wrong.

The German company set up a big skateboard-like half pipe ramp and showcased the maneuverability of the compact city car. Sadly, during one of those tests, the stunt driver approached the half pipe head on, resulting in the A1 flipping on its side.

The incident was immediately covered up by Audi, but a few photos (seen above) were taken during the incident.

So, do you think quattro all-wheel drive would’ve saved the A1 from flipping over? Share your thoughts below.

END_OF_DOCUMENT_TOKEN_TO_BE_REPLACED

Video: Biker tries to do a burnout, fails completely


What is it with people and burnouts? We’ve seen guys fail completely in various cars like a Chevrolet Corvette or a BMW 3 Series. Even those who know what they’re doing ended up getting caught by the police.

Now, it seems that motorcycle riders aren’t immune to becoming show offs, as a new video reveals a rider trying to do a few burnouts and donuts in a parking lot with a couple of his friends.

It’s all pretty fine and dandy until the guy decides to kick it up a notch and get off the bike. Too bad he didn’t count on the machine having a mind of its own.

Hit the jump to see how this bike rider completely failed while doing a burnout.
END_OF_DOCUMENT_TOKEN_TO_BE_REPLACED


The dreaded unintended acceleration problem has been plaguing the media in the last few months, largely because of Toyota’s major recalls due to various parts failing and resulting in out of control vehicles.

But this new video shows Japanese models aren’t the only ones suffering from such problems. In it, a last generation Renault Laguna is going through a series of “unintended acceleration” incidents.

From the erratic behavior though, we can clearly figure out that no floor mat or sticky pedal is to blame. Also, we have to feel bad for the guy on that mobile stair, he totally didn’t deserve it. Don’t forget to watch it until the end, as the wiper is the real cherry on top.

Hit the jump to see this new episode of unintended acceleration (or as we say, driver fail) in a Renault Laguna.
END_OF_DOCUMENT_TOKEN_TO_BE_REPLACED


Give anyone a rear-wheel drive car, and sooner or later you will see them attempt a burnout, a donut or anything in between. Depending on their skills, some might achieve, while others will fail.

Guess in which category this BMW 3 Series owner goes into? A reminder for anyone attempting such things: keep the doors locked, keep your extremities inside the car at all times, and if you really, really want to get out and show off during a donut/burnout, make sure the car is remotely stationary.

You can find this guy’s near-death experience while doing a burnout after the jump.
END_OF_DOCUMENT_TOKEN_TO_BE_REPLACED