The GT500 has always been one of my favorite muscle cars since the epic movie “Gone in 60 seconds”, starring Nicholas Cage. Well, it seems that Elanor is back in 2011, courtesy of GeigerCars. Dubbed the Ford Mustang Shelby GT640 Golden Snake, it comes with an exquisite matte gold exterior look, along with a carbon fiber bonnet, a front lip spoiler and extended side skirts.
END_OF_DOCUMENT_TOKEN_TO_BE_REPLACED

Our colleges from WCF have managed to take a few spy shots with the forthcoming 2013 Ford Mustang Shelby GT500, which will be the most powerful Shelby GT500 ever made. According to Car and Driver, the car will feature a new V8 5.8-liter engine which will be a bored-out version of the current V8 5.4-liter. This power unit will be fitted with a TVS supercharger instead of an Eaton blower. All of these changes will allow the engine to output a whopping 620 hp (629 PS / 462 kW), which is a good 70 hp (71 PS / 52 kW) more than the current model.

The 2013 model will get an updated design that will eschew some of the traditional styling details. Although nothing is certain at the moment, the GT500 will get an updated grille, modified bumpers and LED lightning units, along with other aesthetic changes.

The good news is that the car will have a pretty affordable price tag of only $60,000, which will create some serious problems to its primary rival, the Chevrolet Camaro ZL1. 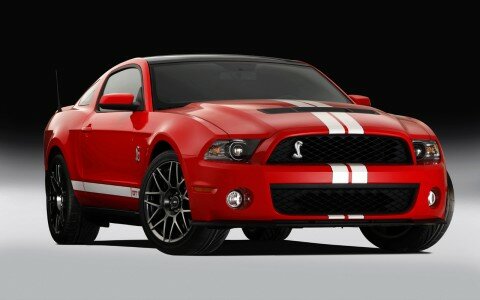 Ford is quite proud of the new generation Mustang muscle car, as after revealing the new 5.0-liter V8 engine available for the GT and uncovering the new Shelby GT350, the company has now presented the even more powerful 2011 Ford Shelby GT500, which sports a lighter, more powerful and more efficient engine.

The unit in question is an all-aluminum 550 HP 5.4-liter supercharged V8, which not only weighs 102 pounds less than the old unit, but is also much more fuel efficient, coming in at 23 mpg highway and 15 mpg city. Torque figures are around 510 lb-ft, allowing the Shelby GT500 with the SVT Performance Package, which includes stiffer springs, Goodyear Eagle F1 SuperCar G tires wrapped around 19-inch at the front 20-inch at the back wheels and higher rear a xle ration, to be 3 seconds faster than the old GT500 on a 2.3-mile test track.

The 2011 Ford Shelby GT500 will be available in three options: regular coupe, cabriolet and a special glass roof edition of the coupe, a first for the model. You can see all of them in the gallery below.

END_OF_DOCUMENT_TOKEN_TO_BE_REPLACED


The Tokyo Auto Salon was filled with interesting customization projects, but this one, coming from a group of students from the Saitama University, really takes the aftermarket cake, as they modified a Toyota Supra mk IV (1993-2002) to look like a classic 1967 Ford Mustang Shelby GT500 Eleanor.

In case you don’t remember, the Eleanor Mustang was extensively featured in the movie Gone in 60 seconds, starring Nicholas Cage, and, arguably, was the best part of the whole movie.

The project is called Moto Supra, and is powered by the same six-cylinder engine as the classic Japanese sports coupe, although it isn’t clear if it is the turbocharged version or the naturally aspirated one. Like or dislike? Share your thoughts below.

END_OF_DOCUMENT_TOKEN_TO_BE_REPLACED


Ford made the wish of many Mustang fans come true when it announced the new 5.0-liter V8 engine, which will debut on the Mustang GT this spring. But soon after the hype was beginning to fade away, rumors appeared that the company is preparing a special twin-turbocharged edition of the engine, presumably for the Shelby GT500.

Sadly, according to Mike Harrison, which is Ford’s chief engineer on the 5.0-liter and 6.2-liter V8 engines, such a thing is impossible. It seems that the new 5.0-liter unit is already occupying a large chunk of the engine compartment, meaning that there isn’t any place to fit the two turbochargers. Any sort of tricks like putting them in the valley of the engine, would mean excess heat for the hood, or putting them lower in the bay would mean excess turbo lag, so there isn’t any way to create good layout.

Seeing as how Ford doesn’t want to commit to any big spending at least for the moment, the upcoming aluminum 5.4-liter will be the new heart of the Shelby GT500.


The Ford Mustang is an iconic car, slap onto it the name of legendary racer and coachbuilder Carroll Shelb6, and you’ve got yourself a very exclusive and powerful vehicle, which has seen many versions like the GT500.

But according to some new rumors popping out all over the auto industry, it seems that the Blue Oval is considering creating a new engine in its EcoBoost series, a V8 one, just for the future Mustang GT500 model. That’s right, imagine a twin-turbo, direct injected V8 on a massive Mustang body.

We’ve already seen what the EcoBoost V6 unit can do on the Ford Taurus SHO, generating 365 HP, and according to some sources, a new, more economical but still powerful V8 unit will replace the current 5.4-liter engine which develops 540 HP and doesn’t really rival a Prius in terms of fuel economy, to say the least.

Until we get an official confirmation, this will still be a dream for many Ford and Mustang fans out there.