The EPA and DOT present new fuel economy labels, ask you to choose


Electric and hybrid cars are becoming more and more frequent lately, so the US government wants to keep regular customers informed about the performance of such efficient models, and has tasked the Department of Transportation and the Environmental Protection Agency with designing new fuel economy labels that will be present on new vehicles in dealerships.

The EPA and DOT have come forward with two designs, and ask the US public to decide which type of fuel economy label they want present on new models starting with 2012 model year vehicles.

Both have details like the fuel average of the vehicle in question, as well as CO2 emissions, the annual fuel cost or how it compares with the industry average for its specific segment. A QR bar code is also present, which can direct smartphones to a more detailed website.

The tall one also has a special rating, going from A+ to D, which easily portrays just how efficient the car actually is. Better yet, electric and plug-in hybrid models will also be getting a special MPGe rating, detailing just what average they would get in comparison to regular gasoline or diesel-powered models.

People can vote on the winning design and check out high res versions at the EPA website.

END_OF_DOCUMENT_TOKEN_TO_BE_REPLACED


Even though we’re a week away from the official unveiling of the 2011 Ford Explorer, the Blue Oval continues to spoon feed us little tidbits of information.

The latest one concerns the Explorer’s new EcoBoost 2.0-liter inline-four cylinder engine. The turbocharged engine is 30% more efficient than the outgoing V6 Explorer.

Sadly, that’s all we’re getting, as official EPA numbers for the 2011 Explorer haven’t been revealed by the federal body just yet.

END_OF_DOCUMENT_TOKEN_TO_BE_REPLACED 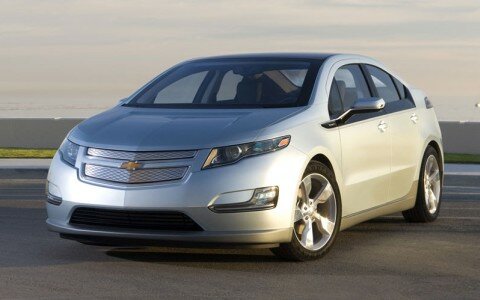 It seems that the car, when it will appear on select markets at the end of the year, will boast an 8-year/100,000 mile warranty for its battery pack.

This isn’t from the generosity of the GM’s heart though, as the EPA considers the battery pack, which powers the electric motors, to be part of an emissions control system, just like its range-extending 1.4-liter gasoline engine. As such, it must endure the same warranty as a catalytic converter, for example.

Still, GM is confident that the battery pack will serve its purpose well. In the final car, it will weigh 400 pounds and output around 110 kilowatts. Almost all of its components are built by GM, so the company has control over its price.

Volt fanboys will be disappointed though, as the EPA has announced that it will test the car’s fuel average once more, with a new set of standards. As you may remember, using preliminary standards for extended-range electric vehicles, the Chevrolet Volt was rated at a whopping 230 mpg a few years ago.

Expect the Chevrolet Volt to arrive at the end of the year in select territories across the US, and later on, in 2011, in other parts of the world.

END_OF_DOCUMENT_TOKEN_TO_BE_REPLACED


Ford scored a major win a few months ago, when the EPA clocked the fuel average on the new 2011 Mustang V6 version at 31 mpg. This made the muscle car be the first 300+ HP (305 HP to be exact) model to achieve such an average.

Now, a team of Ford engineers took the 3.7-liter V6-powered ‘Stang at the Bristol Motor Speedway in Tennessee, to see if it can do 1,000 laps on the 0.533-mile course with just one tank of gas.


Hyundai is going all out with the 2011 Sonata model, as not only did it implement the new, more attractive design language, but also threw everything plus the kitchen sink in terms of options.

Now, after pleasing regular fans, those with a desire for a bit more performance out of their sedan will be treated by the South Korean company with the 2011 Hyundai Sonata 2.0-liter Turbo model.

As you already know, the new car is powered by a direct injection, turbocharged 2.0-liter four-cylinder engine, capable of 274 HP. Up until now though, we didn’t know just what impact the potent engine will have under the hood of the Sonata: will it offer adequate performance or be weighed down by the sedan?

Worry no more, as Hyundai has revealed the first official performance details. The Sonata 2.0 Turbo will be able to sprint from 0 to 60 mph in an impressive 6.5 seconds. Better yet, it seems that the fuel economy won’t be so bad, with Hyundai estimating 22 mpg US in the city, and an equally impressive 34 mpg on the highway.

Expect the 2011 Hyundai Sonata 2.0T to hit dealerships in the following months.

END_OF_DOCUMENT_TOKEN_TO_BE_REPLACED


Ford has been hyping up the 2011 Fiesta for its upcoming US market launch, showcasing everything from its attractive design to its supercar-killing attributes.

Now, the Blue Oval will be able to flaunt one more thing: the fuel average of the compact hatch. The EPA officially revealed the rating for the 2011 Fiesta, confirming the first estimates: 29 mpg in the city and 40 mpg on the highway, when equipped with the six-speed, dual-clutch PowerShift automatic gearbox.

Those who opt for the five-speed manual (the base option), will get 28 mpg in the city and 37 on the highway, still better than rivals like the Toyota Yaris or Honda Fit. Both ratings involve the 120 HP 1.6-liter inline-four cylinder unit.

Expect the highly frugal 2011 Ford Fiesta to hit dealerships in the next few weeks.

END_OF_DOCUMENT_TOKEN_TO_BE_REPLACED


These days, practically all carmakers are trying to make their models as light possible in order to achieve the best fuel average. But while some may proclaim that aerodynamics also play a key role in keeping fuel consumption down, lighter is still better.

In order to further highlight the importance of reduced weight, Lotus, a sportscar manufacturer specialized in releasing lightweight models, has been asked by the National Highway Traffic Safety Administration to take a mainstream model, the Toyota Venza, work its magic, and see how the reduced weight will impact the fuel average.

The British engineers went to work and revealed the 2020 version of the Venza, now 38% lighter. The reduced weight did come at a rise of 3% in the cost of manufacturing, but the fact that its fuel average was improved by 23% does make it up for it. The futuristic people carrier had almost half as many parts as the current model, and used aluminum and other lightweight materials extensively.

Do bear in mind that the 2020 concept used technologies that will become viable around that time, so Toyota won’t go asking for plans from Lotus for the next Venza. Still, it does highlight the importance of keeping weight down in carmaking.


Great fuel average and low emissions aren’t things you would normally associate with sports cars, but thanks to the new 2011 Lotus Elise S, they’re practically synonymous.

Why are we saying such a thing? Well, thanks to the improvements the Elise received for its 2011 model year, including lighter weight (1,931 pounds), a new Evora-esque nose and, most importantly, a 1.6-liter inline-four cylinder unit, it will achieve a whopping 46.7 mpg (US) on the EU highway cycle, while emitting just 149 g/km of CO2.

This makes the entry-level Elise the most efficient sports car on the market, achieving impressive numbers while also outputting 134 HP and sprinting from 0 to 62 mph in under 6 seconds. Sadly, only Europeans are going to enjoy the 1.6-liter powered Elise S, as the US is still stuck with the 1.8-liter engine for their Elise model.

END_OF_DOCUMENT_TOKEN_TO_BE_REPLACED


When you think of powerful yet frugal and low emission models, the Range Rover lineup doesn’t exactly come to mind. With the next generation SUV though, the engineers at Land Rover are going to push their talents to the limit, and create a model that blends off-road performance with a lower fuel average and reduced CO2 emissions.

How will it do that? First off, through the new body the next generation Range Rover will sport, when it will appear in 2012. The overall shape and design won’t be drastically changed, but the height of the roof is going to see a reduction, in order to improve aerodynamics. Most importantly, a new riveted aluminum chassis is going to be used, resulting in a massive decrease in weight of 992 pounds (450 kg).

Secondly, the next Range Rover is going to boast much more efficient engines. The first units to be available will be a 300 HP TDV8 and a 260 HP TDV6. They will be followed by petrol variants, but it’s safe to say the oil burners are going to be the popular choices.

These units are going to be attached to a ZF eight-speed automatic gearbox, but don’t worry, as a transfer box will be making an appearance, in order to keep the off-road abilities of the Range. While it’s far from official, engineers are already speculating that the TDV6 will be able to offer 33 MPG (US) and emit under 200 g/km of CO2 (the current Range Rover emits over 300 g/km).

Also among the future plans for the next generation is a diesel electric hybrid, which would take the CO2 emissions even lower, around 170 g/km.

Overall, the next Range Rover is looking extremely good. What do you think? Is this blend of performance, luxury and fuel efficiency going to win over customers?