At this year’s Nardo High-Speed Test that was held in Italy by the famous German car magazine Auto, Motor und Sport, the tuners from G-Power tested their new kit for the BMW M3, managing to hit an impressive top speed of 207.10 mph or 333.29 km/h.

This M3 was fitted with a powerful SK II “Sporty Drive” supercharger and it was driven by the Vice President and Technical Director of G-Power, Christian Stober. There were only two other cars faster than this BMW M3, one had an engine that produced 900 hp and another one that featured a 1,000 hp engine.

G-POWER mentioned that if their BMW M3 had a taller gear, the car would have been able to reach a top speed of 211 mph (340 km/h).

If you have a BMW M3 and you want this supercharger kit, prepare to pay 11,500 Euros, without taking into consideration the price for installation.

If you have a big family but you still want to drive very fast, G-POWER might have the perfect solution for your desire as they just revealed their tuning program for the BMW M5 Touring. Under the hood you’ll find a V10 5.0-liter engine that was fitted with a SK III RS twin-supercharger system that features two ASA T1-316 superchargers as well as a water-cooled, twin-scroll intercooler.

They are going to make only 1,025 units of this M5 Touring so grab one while you still can.

The company’s new model has been fitted with a G-POWER SK II bi-supercharges that increased the power of the engine to 660 hp and 650 Nm of torque. With this significant upgrade, the M5-based Hurricane GS will do the 0-60 mph sprint in 4.6 seconds, 0-124 mph in 11.4 seconds, onto a top speed of 201 mph.

Similar to the RS model, the GS now rolls on a brand new set of rims that are more suitable for this kind of performance. The GS has been equipped with 20-inch forged SILVERSTONE CLUBSPORT that measure 9×20 in the front ant 10.5×20 in the back, covered by MICHELIN 255/35 ZR 20 and 285/30 ZR 20 tires. In the back of this M5-based car, G-Power installed their proprietary SPEED-Flow exhaust system.

As mentioned before, the company fitted the Hurricane RS with the impressive G-POWER SK II bi-supercharger system that will allow each of the cylinder banks of the V10 5.0-liter to be fitted with a belt-driven ASA T1-313 compressor. To put things in another perspective, the engine churns 660 hp, enough to make it the fastest LPG car in the world.

In order to efficiently stop this fast car, the GS has been equipped with a high-performance braking system developed by the company as well as a RS coil-over sports suspension that offers 9-way adjustability for rebound and compression plus infinitely variable adjustments.

The car set the world record for the fastest LPG vehicle in the world on August 9, 2010 near the company’s HQ in Autenzell, Germany, on a desolate strip of autobahn. The car succeed to reach a top speed of 201 mph (333 km/h), entering the Guinness World Book.

This new set of wheels costs $9,900 and the price for the entire conversion package will set you back $43,500.

There are no competitors for the 2011 G-Power Hurricane GS at the moment, unless other tuning company decides to create an LPG car capable of reaching 201 mph or more. Maybe AC Schnitzer or Hamann will come up with a similar car, taking into consideration their passion for BMW cars.

Back in August, German tuning manufacturer G-Power released their version of the BMW M5 that established the World’s Fastest Sedan record. It has a top speed of 231 mph (372 km/h), similar to the legendary McLaren F1 launched in the 90s. The M5 Hurricane RR is the reiteration of the RS version that used a 551 kW (750 hp) V10 twin-supercharged engine, which was able to hit a top speed of 228 mph (367.4 km/h).

The current record might be taken down once the Bugatti 16C Galiber is officially available with its 8.0-liter 16 cylinder engine like the Veyron, but using superchargers (not turbochargers). The Bugatti will most likely be available starting with the second part of 2012.

Recently G-Power came with another great car, the M6 Hurricane RR, based on the BMW M6. It has the same V10 800 PS & 800 Nm engine as the M5 version. Again, G-Power claims that this model is “world’s fastest 4-seat coupe.”

For those of you interested in the M6 Hurricane RR, the basic price is €252,100 (including the standard BMW M6 car).


Tuning company G-Power really knows how to squeeze out every ounce of performance from BMW models, revealing a lot of special projects up until now.

But seeing as how the BMW M5 will soon be retired, and with it the impressive 5.0-liter V10 engine, the tuning company decided that something special was needed. As such, G-Power took a regular BMW X6 M, and replaced its 4.4-liter twin-turbo engine with the naturally aspirated goodness of the 5.0-liter V10.

That’s not all though, as the resulting project, the G-Power BMW X6 Typhoon RS Ultimate V10, has seen the engine’s displacement increased to 5.5-liters and the addition of two superchargers. Other modifications include a remapped ECU, special pistons, a new, completely bespoke rear differential, which needs to handle all that power going to the rear wheels (the xDrive all-wheel drive system was also scrapped).

As you can imagine, a plethora of other upgrades were made to the exterior and interior of the car. A new body kit was added to the outside, as well as 23-inch wheels. The inside boasts four individual carbon fiber seats, a sports steering wheel and a new carbon fiber trim.

G-Power will produce just four BMW X6 Typhoon RS Ultimate V10, each with a price tag of €675,000 ($873,085). If that doesn’t strike your fancy, then there are plenty of other packages available from G-Power.

END_OF_DOCUMENT_TOKEN_TO_BE_REPLACED


G-Power has just unveiled its newest tuning project regarding a model from BMW, tackling the top-of-the-range car in the 7 Series lineup, the 760i.

After quite a few modifications, including a remapped ECU, an optimized eight-speed transmission and, most importantly, a new set of turbochargers from ASA which replace the regular BMW ones, the 6.0-liter V12 engine under the bonnet of the G-Power 760i Storm now develops a whopping 715 HP and 738 lb-ft (1000 Nm) of torque. 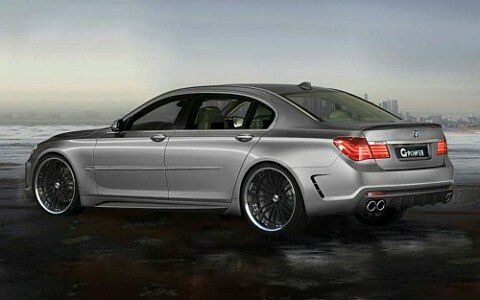 This massive increase in power will get the big Bavarian saloon from 0 to 62 mph in just 4.2 seconds, and up to 214 mph (345 km/h). Such feats are attainable also due to the special aerodynamic body kit the G-Power team fitted. It includes a front skirt, new bonnet, side skirts, lighter doors, and a rear diffuser plus spoiler. The ride height has been dropped by 30mm and the car is now sitting on 22-inch wheels with Michelin performance tires.

Only 10 such G-Power 760i Storm units will be made, so get your order in as fast as possible.

END_OF_DOCUMENT_TOKEN_TO_BE_REPLACED


Performance SUVs, if you’ve seen the last episode of Top Gear, are pretty much useless, but that doesn’t stop tuning companies from having a go at further upgrading their power stats and design.

Major enhancements were also made to the design of the two models, which received a new carbon fiber front skirt with much bigger air intakes, a new bonnet made out of a Kevlar and carbon fiber hybrid, wider side skirts from carbon fiber, as well as a rear diffuser which matches the four tailpipes. The X5 M is available with a set of one-piece 23-inch aluminum wheels, while the X6 M gets a three-piece set with the same size, and can also be fitted with 22-inch ones.


As I’m not sure what would anyone do with an X5 or X6 M, I’m not even positive that anyone will opt for the tuning and design package from G-Power, but then again, taste is subjective. What do you think? Leave a comment below.

END_OF_DOCUMENT_TOKEN_TO_BE_REPLACED

The German tuner G-Power created an outstanding tuning program for the BMW M5. Dubbed “Hurricane”, the G-Power M5 is powered by an impressive 730hp, that’s 224 hp more than the standard M5′s 507 hp output. And, as you’d expect with those numbers, the car is also pretty fast. Recently tested on the Nardo track, it reached 322 km/h (200 mph) but it seems an electronic problem prevented it from reaching G-Power claimed top speed, of over 350 km/h (217 mph).

That’s about all the details we have for now, but stay tuned, because G-Power said it would reveal more on the “Hurricane” program sometime soon and rumors say they’ll even announce an 800 hp version.

Meanwhile, you can check out more photos of the BMW M5 Hurricane after the jump.