Finally! Lamborghini Aventador In All Its Glory

After months of spy shots, rumors, speculations and scanned photos, this is the new Lamborghini Aventador, the successor of the highly-acclaimed Murcielago. The new Aventador 700-4 is the company’s top dog and hopes to be even more successful than its predecessor. The design of the new supercar was inspired by two previous Lamborghini cars, the Reventon and the Sesto Elemento. It also has the air intakes of the Murcielago, but the similarities with other models stop here.
END_OF_DOCUMENT_TOKEN_TO_BE_REPLACED

The newest addition to the Rolls Royce EX concept series is the 102EX, also known as the Phantom Experimental Electric. The company will bring it to this year’s Geneva Motor Show to gauge feedback from the automaker’s clientele, shareholders along with the general public to find out if they would like an electric-powered Rolls Royce.

The engineers used the aluminum spaceframe from the Phantom as the foundation of the 102EX and installed not one, but two electric motors (145 kW each) as well as a lithium-ion battery. The latter uses five lithium-cobalt-manganese-oxide “pouch cells” sized at four, eight, ten, thirty-six, and thirty-eight cells in a formation that imitates the shape of a regular engine and transmission.
END_OF_DOCUMENT_TOKEN_TO_BE_REPLACED

Leaked online yesterday, Seat has revealed its new concept car, dubbed IBX. They say that it is an urban sports utility vehicle that was developed for an active lifestyle. Looking at the car, it resembles a little with the BMW X6 and combines the versatility of an SUV with the elegance of a coupe.

The car measures 4.25 meters in length, 1.80 meters in width and 1.62 meters in height and is powered by an advanced hybrid powertrain. The Spanish automaker said that in electric model, the IBX Concept is able to drive for up to 28 miles (45 km). Seat said that they are at the moment considering both a direct injection TSI and TDI engine for the combustion unit. Also in the works there is a 4WD system.

This relatively compact crossover model is a little bit smaller than the Volkswagen Tiguan and appears to be a follow up on the automaker’s 2007 Frankfurt Motor Show Tribu concept, a car that never got the green light for production. However, this time the Spanish automaker says that the IBX demonstrates “a possible expansion of the SEAT product portfolio.”

The guys over at Autogespot.com have managed to grab another set of spy shots, right from the Geneva showroom floor. We’ve already showed you the Lamborghini Aventador and now here are two pictures of the Wiesmann Spyder Concept.

It will be a feasibility study and if it will get a positive feedback, it might get the green light for production as early as 2012. This concept is smaller than the MF4 Roadster and promises to be a traditional lightweight roadster while at the same time offering the retro Weismann look. The Wiesmann Spyder Concept has no doors, no windscreen and no roof.

Further details will be revealed in the following days.

The 81st edition of the Geneva Motor Show will be a great place to see new supercars. Aside from Ferrari, Lamborghini and Pagani, there is going to be another one, the Koenigsegg Agera R. If you remember, a year ago the company revealed an Agera model that had a V8 4.7-liter twin-turbo engine that produced 898 hp (910 PS / 669 kW) and 811 lb.-ft (1100 Nm) of torque. These impressive figures allowed the car to do the 0-60 mph sprint in only 3.1 seconds, hitting a top speed of more than 245 mph (390 km/h).

Unfortunately we don’t know how fast the Agera R will be, but what we do know is that it has Vortex Generating Rim (VGR) wheels, wrapped around Michelin tires that can hold a speed rating of up to 419 km/h (260 mph) and they were specially designed for this hypercar.

More info about the astonishing Koenigsegg Agera R will be revealed very soon so stay tuned.

Probably one of the worst kept secrets at this year’s edition of the Geneva Motor Show is the highly-anticipated successor of the Lamborghini Murcielago dubbed Aventador (700-4). Last week we’ve showed you a scanned photo of the car and today we’ve uploaded photos with the car spied on the Geneva show floor. These pictures were taken by our colleges at Autogespot.com and thanks to them we can see this automotive masterpiece.

More information about the supercar will be revealed in the hours to come. Stay tuned.

The Seat IBX Concept was leaked online yesterday, ahead of its official debut that will occur this week at the Geneva Motor Show. From the looks of these pictures, it will have the same size as the Audi Q3 and the Porsche Cajun from its own VW Group and similar proportioned with the Opel Antara, Nissan Qashqai and Ford Kuga, models outside the Volkswagen Group.

Most likely, we will not see a production version of this SUV soon as this one has a 3-door configuration. However, the car will probably be the foundation for a sport utility vehicle from the Spanish automaker Seat.

We will let you know once the car is officially unveiled this week at the 81st edition of the Geneva Motor Show.

As you probably know by now, the Italian automaker Ferrari will be bringing to this year’s Geneva Motor Show the highly-anticipated FF model. According to Carscoop.com, they will also bring a “greener” 458 Italia with the HELE System (High Emotion, Low Emission) that will reduce the fuel consumption and the CO2 emissions.

Although 99% of the people that buy a Ferrari 458 Italia don’t really care about fuel economy or carbon dioxide emissions, thanks to this HELE technology and the start/stop technology, the car will be able to emit 11% less CO2 emissions, from 307 g/km to 275 g/km. Most likely, the HELE system will be offered as an optional feature.

We’ll let you know once Ferrari reveals the car next week at Geneva.

Opel Proves That MPVs Can Be Cool 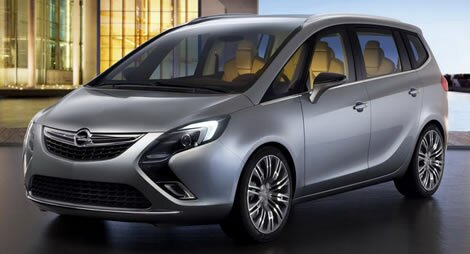 Previewing the next generation of the Opel Zafira MPV, the German automaker has released full details of the concept that will be the foundation of the production model. Opel described the concept as a “lounge on wheels” and the design study uses the same style language as seen on the Astra and Insignia models.
END_OF_DOCUMENT_TOKEN_TO_BE_REPLACED 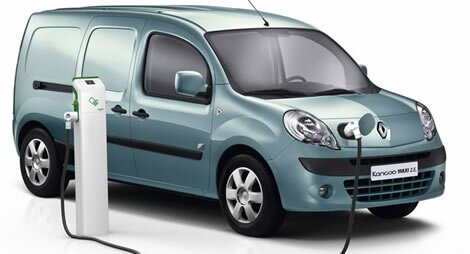 Next week at the 81st edition of the Geneva Motor Show, world’s largest automotive event, the French automaker Renault will bring their new Kangoo Maxi Z.E., which is the newest member of the company’s EV family, a car that will go on sale in this fall. It will be available in two or five-seat configurations and will have a maximum carrying capacity of 162.4 cubic feet (4.6 cubic meters), thanks to the 1.4 ft (40 cm) longer wheelbase in comparison with the Kangoo Z.E., while the load length will be 9.5 ft (2.9 meters).
END_OF_DOCUMENT_TOKEN_TO_BE_REPLACED

At the 81st edition of the Geneva Motor Show, the German automaker Opel will bring the production version of the plug-in hybrid Ampera, one of the best looking cars I’ve seen lately. The automaker said that they will sell the car for the same price all across Europe – 42,900 Euros. In Germany, the car will have a price tag of only 36,050 Euros thanks to the government tax credits. The automaker said that they already received 1,000 preorders.

As a reminder, the Opel Ampera will have four drive modes that will make best use of the battery-stored energy. The “normal” mode will be for everyday mixed driving; “sport” was created for driving a little bit more active, at the expense of energy; “mountain” mode can optimize the hybrid system to deal with ascents and declines in the topography; and “city” mode will make the most of the regenerative braking and running the gas engine in order to keep the car’s battery as fully charged as possible.

The Ampera will have a range between 25 to 50 miles (40 to 80 km) on electric power, extended to 310 miles (510 km) once the conventional 1.4-liter gas engine kicks in and helps power the car’s electric motor and feed energy to the 16 kWh lithium-ion battery. 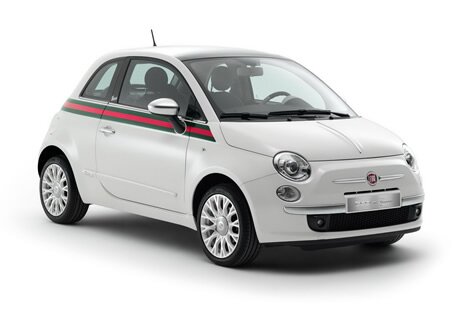 Special editions are becoming the choice for many car manufactures in their search of increasing sales. Fiat teamed up with Gucci for the 500 model, celebrating Italy’s 150th anniversary since the unification and Gucci’s 90th anniversary. With two reasons to celebrate, the Fiat 500 by Gucci was announced and it will have its official debut next week at the 81st edition of the Geneva Motor Show. 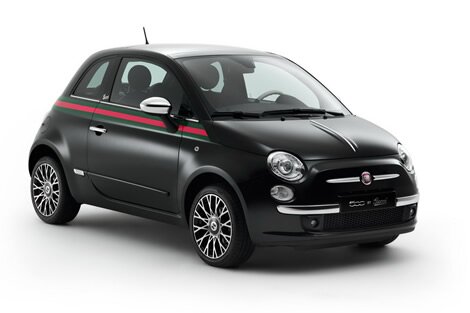 The limited edition 500 was customized by Frida Gianni, Gucci’s Creative Director, in partnership with the automaker’s Centro Stile. The tiny car will be available in two flavors, with a white exterior paint and satin chrome detailing, and ivory and black interior or in a black with detailing in shiny chrome, and a two-tone black and white interior.

Both of them will get 16-inch alloy rims covered by 195/45 R16 tires with the hubcaps featuring the interlocking “GG” logo in the same color as the car, plus Gucci’s signature on the rear hatch and B-column, and the fashion house’s signature green-red-green stripe, that runs along the entire perimeter of the car. The Fiat 500 fitted with the 1.4-liter engine that outputs 100 hp will also have Gucci green-painted rear brake calipers.

Starting with April 1st until June 30th, the Fiat 500 by Gucci will be available exclusively by pre-order online and will have a base price of $23,000 in Italy. The regular sales will commence in Europe this July, while the rest of the world will have to wait until the end of this year. 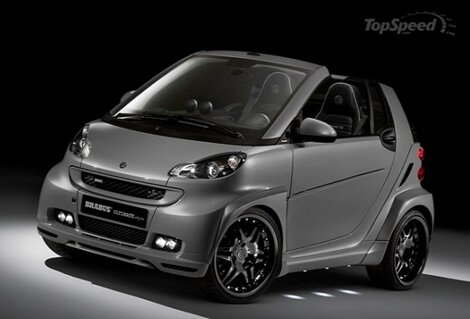 We’ve already told you that Brabus are going to bring two cars to this year’s Geneva Motor Show, the Brabus Rocket and the Brabus SLS. They have another ace up their sleeves as they are going to present another car, based on the Smart ForTwo.

The Brabus ForTwo Ultimate will come in the same matte gray body finish, just like the aforementioned models. In addition, it will have some carbon fiber inserts plus a very nice set of machined-alloy wheels. Although we can’t tell you what will happen under that tiny hood, Brabus said that the Smart Ultimate will come with a modified engine.

All three cars will be unveiled next week at the 81st edition of the Geneva Motor Show.

You probably know by now that the 81st edition of the Geneva Motor Show is going to be one of the biggest automotive events of this year. With dozens of cars set to be launched, the auto show looks promising. Jaguar will also play its part and they will bring the 2012 XKR S, a car that will come with an upgraded supercharged V8 engine that will be able to develop a whopping 550 PS and 680 Nm of torque.

Thanks to this impressive engine, the car will be able to hit a top speed of 186 mph (300 km/h) and the 0-60 mph sprint will be done in only 4.2 seconds. Jaguar also said that the XKR S needs only 8.6 seconds to reach 100 mph from start. If these figures are real, it will be the fastest Jaguar ever made. All of these performances have a very important downside; the car will have CO2 emissions of almost 300 g / km.

We’ll have more info in March when Jaguar will bring the XKR S to Geneva.

The German automaker Volkswagen has revealed the first images and details about the Golf 6 Cabrio, a model that will have its official debut in March at the 81st edition of the Geneva Motor Show. I’ve always been a huge fan of the Golf, but at the same time I never liked soft tops. Unfortunately, this one has a soft top that has an electro-hydraulics drive that requires 9.5 seconds to open.

The Golf 6 Cabrio is based on the 3-door hard-top model and has just about the same design lines. The car will be available with 6 turbocharged direct-injection engines – two TDIs and four petrol TSI power units. These engines will offer a power output that ranges from 105 PS / 77 kW to 210 PS / 155 kW,

The base price for the Volkswagen Golf 6 Cabrio will be 23,625 Euros in Germany.