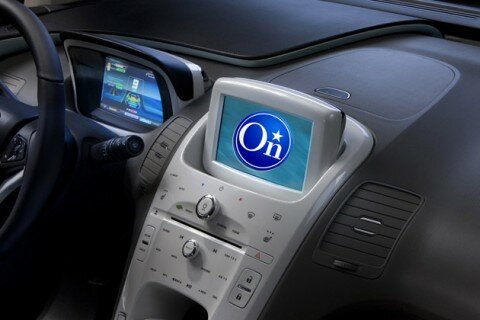 Last week we revealed a report containing all of the new features that might be implemented in the new and improved OnStar system on vehicles from General Motors.

Now, GM has officially revealed what new things will be implemented in its next gen infotainment system.

First off, the voice recognition system has been improved, in order to allow drivers and passengers to better control the systems of the car. Secondly, the Bluetooth connection will support full phonebook integration, while the navigation system has been improved. You will also be able to connect to traffic management and weather alert services in order to stay informed on trips.

OnStar will also launch a new MyLink series of mobile apps for smartphones, including ones for iPhones and those running Android OS. These will basically act like your virtual key, allowing you to lock and unlock the car, start the engine and other such things.

Here’s the more interesting part, the rumored Facebook and voice texting support. These features are still in the testing, but OnStar will allow you to post audio Facebook updates, as well as read aloud updates from your friend feed.

The voice texting part has also been confirmed, but not in the way that you were expecting. When you will receive a text message, OnStar will read it for you, and allow you to select pre-recorded messages, like “I’m driving”. This will be achieved using only your voice. Those that wanted speech-to-text capability are going to be disappointed, as GM might not implement such a thing, in order to keep from distracting the driver.

Overall, the OnStar system is becoming extremely robust, and might constitute a big advantage for GM cars in front of its rivals. What do you think?

END_OF_DOCUMENT_TOKEN_TO_BE_REPLACED

The newest battle zone for General Motors and Ford is in terms of infotainment services, with GM boasting OnStar and Ford having the SYNC system.

Seeing as how Sync is still top dog, especially in its newest form, the MyFord/MyLincoln Touch versions, GM is planning a healthy upgrade to its OnStar service in order to expand its capabilities.

According to the latest batch of rumors, things might get pretty interesting for OnStar customers. It seems that the service will get Facebook capability, as well as the ability to respond to SMS messages with your own voice and even built-in functionality for the Trapster app.

First off, it seems that OnStar will use its voice recognition software to allow you to publish audio updates to your own Facebook page. While this idea sounds a bit weird, it might really help those that can’t get enough of the social network.

Secondly, when you receive text messages, OnStar will read them out for you and then let you reply to them by choosing four pre-determined messages through the voice command system. Not exactly what some might have in mind, but if it helps reduce distracted driving, we’re all for it.

The last rumor is a bit of stretch, but it might happen. Trapster, a popular mobile phone app which lets you know where police radars or traps are located, might be incorporated into OnStar. This is reinforced by the fact that a Cadillac CTS-V Coupe with manufacturer plates has recently been spotted around the Trapster HQ and will be used by the company in the 11-99 Foundation Car Drive.

The new and improved OnStar is set to be revealed next week, so until then, we can only guess what new features will be added.

END_OF_DOCUMENT_TOKEN_TO_BE_REPLACED


BMW knows most of its customers are pretty tech savvy, and that’s why it has just revealed a brand new feature for its comprehensive iDrive infotainment system: iPod connectivity.

Actually, this is a bit more than just plugging your iPod/iPhone in and listening to the music, as BMW enables you to use the iDrive’s main joystick to browse through your iPod’s media library, with contents being displayed on the screen of the car.

All of the new features currently being worked on by BMW are part of the company’s new Connected Drive strategy, which aims at making the interaction between driver, car and the driver’s third-party devices, to be as smooth as possible. Expect the iPod functionality to arrive in all new BMW models at the beginning of 2011.

To see what the new BMW iDrive features is all about, hit the jump for a video demonstration.
(more…)

Ford to implement ‘Do Not Disturb’ button on 2011 SYNC system, blocks phone calls and texting


Driving a car requires the actual driver to be focused on the road and what’s happening around the car at all times. Sadly, with the advent of technology, more and more distractions are becoming responsible for car crashes or other such incidents.

That’s why Ford, with the 2011 iteration of its SYNC infotainment system (specifically the MyFord Touch and MyLincoln Touch versions), will implement a novel new button called ‘Do Not Disturb’.

If pressed, the SYNC system will temporarily block capabilities “not relevant to the task of driving while the vehicle is in motion.”

More specifically, if you have your mobile phone connected via Bluetooth to the SYNC system, it will divert all incoming phone calls to voicemail, while text messages will be stored on the device for later viewing. This won’t affect voice-activated phone calls, or calling the emergency 911 service, but it will help the driver focus on the actual task of driving.

Besides the restrictions made to the phone, the second generation SYNC system will display fewer navigation destinations, and won’t let drivers access the keypad while the car is in motion.

Frankly, with more and more accidents attributed to distracted driving, we think Ford’s initiative should be applauded. What about you? Share your thoughts below.

END_OF_DOCUMENT_TOKEN_TO_BE_REPLACED


In today’s car market, making good vehicles isn’t enough, as more and more features need to be added in order to attract people. As such, Ford and Microsoft teamed up for the Sync/MyFord infotainment system, which offers anything from great satellite navigation to support for various mobile phones.

General Motors isn’t sitting passively, and even though it has its OnStar system, it might try to partner up with one of Microsoft’s rivals, Google. According to a report coming from MotorTrend, the US carmaker might use the Android mobile operating system on future models.

According to MT, this collaboration will pave the way for a new era in infotainment systems. The Android OS currently has a pretty big marketplace filled with interesting applications, which might turn owning a GM car into a much more pleasant experience.

Still, as MT notes, this might interfere with the duties of GM’s OnStar system. We won’t know for sure when or even if the partnership will be made official, but you can be pretty sure that it will be better than the Chinese Google Android car, the Roewe 350.