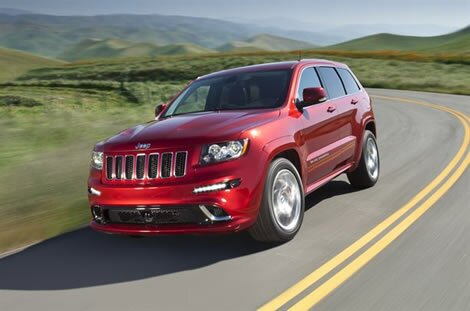 
The European debut of the Jeep Grand Cherokee SRT8 is scheduled for this month’s Frankfurt Motor Show. This hardcore SUV is motivated by a new V8 6.4-liter HEMI engine that produces 464 hp and a peak torque of 465 lb.-ft, which is 49 hp and 45 lb.-ft more than the outgoing 6.1-liter power unit.

Featuring such a powerful engine under its hood, it shouldn’t come as a surprise that it can do the 0-62 mph sprint in only 4.8 seconds, en route to a maximum speed of 158 mph. Although it has more power, the car manages to drink 13% less fuel than the older model.

Aside from the extra oomph, the SRT8 version of the Grand Cherokee benefits from a 146% improved torsional stiffness and features the company’s new Selec-Track suspension management which promises to make this model the “best handling Jeep ever.”

The car will be brought closer to the ground by 30 mm and will have a new body-colored front grille that has a bespoke black screen background as well as chrome bezel inserts in order to emphasize the masculine look. Other styling changes include a brand new sculpted hood, a gloss black lower front grille, a dual-exhaust system and also a rear spoiler.

Inside the cabin, the European version of the Jeep Grand Cherokee SRT8 comes with a race-inspired cockpit that has sculpted Nappa leather and suede seats, a flat-bottomed steering wheel and a bunch of carbon fiber accents for the door trim panels and the instrument cluster.

Jeep Grand Cherokee Might Get Diesel Engine In The U.S. 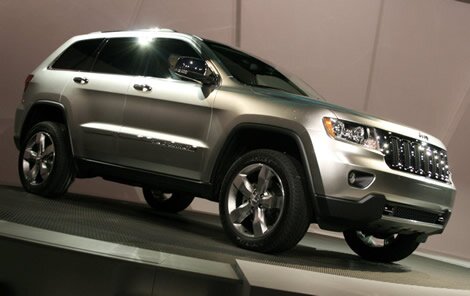 The latest rumors say that Sergio Marchionne, who is Fiat-Chrysler’s CEO, has confirmed plans to offer a diesel engine for the Jeep Grand Cherokee in the United States starting with 2013. Although there aren’t many details available at the moment, expect to see a V6 3.0-liter turbodiesel power unit that produces 237 hp (241 PS / 177 kW) and 406 lb.-ft (550 Nm) of torque.

In the European-spec version, this engine can do 8.3 liters / 100 km (28.3 mpg), which is way better than the Pentastar V6 3.6-liter so a diesel option sounds pretty good for those of you that worry about the increasing prices of gas.

Sergio Marchionne, the chief executive of Fiat and Chrysler announced that he is very happy with the new generation Grand Cherokee market success (including Europe) and that Fiat is currently looking into creating new SUVs based on Jeep’s platform. Launched in June, the 2011 Grand Cherokee is selling extremely good (October sales are up 291 percent compared to October 2009) and expectations are also high for the new Dodge Durango, which is based on the same platform and will go on sale next month.

Marchionne said he is very happy with the Jefferson North assembly line results and added that Fiat considers using the Grand Cherokee platform for a future Maserati SUV to compete the German rivals Porsche Cayenne, BMW X5 and the Mercedes Benz ML Class.

END_OF_DOCUMENT_TOKEN_TO_BE_REPLACED


It seems that the 1993-2004 Jeep Grand Cherokee might have a potential problem with its rear-mounted fuel tank, at least according to the National Highway Traffic Safety administration, which has just launched an investigation into this subject.

On the request of the Center for Auto Safety, the NHTSA has revealed that there are 44 cases where a rupture in the Gran Cherokee’s gas tank might have led to fire, after the SUV was involved in a car crash. The potential death toll might be as high as 55.

Bear in mind that the investigation is barely underway, and so far the NHTSA said that a thorough analysis is required to see if the fires had anything to do with a rupture in the fuel tank. Chrysler has revealed that it cooperate fully with the federal body.

END_OF_DOCUMENT_TOKEN_TO_BE_REPLACED


A lot of people have been eagerly awaiting the launch of the 2011 Jeep Grand Cherokee model. But seeing as how the new SUV will arrive in dealerships a few weeks from now, Chrysler has decided to make the wait a bit more manageable.

As such, after revealing the patriotic ad for the SUV and the new iPhone app with full vehicle information about the new model, the company has now presented the online configurator for the 2011 Jeep Grand Cherokee.

Until you’ll be able to configure one at your local Jeep dealership though, the new Grand Cherokee configurator is the next big thing. Check it out at this address.

END_OF_DOCUMENT_TOKEN_TO_BE_REPLACED

As such, besides the patriotic ad, the US carmaker has decided to target technology-inclined customers by releasing a special Jeep Grand Cherokee vehicle information application for the iPhone.

Besides the regular manual which is now being shipped on special DVDs, anyone, Jeep GC owners or not, can download a free iPhone app with data about the upcoming SUV. Besides flipping through pages of the virtual manual, users will also be able to check out videos detailing various procedures or vehicle systems.

The app also allows you to contact Chrysler with questions concerning the car, as well as access the Jeep community or other things. While it is currently available just for the iPhone, Chrysler assures us that versions for the Android mobile OS and for the Blackberry OS are in development.

If you want to see the app in action, then hit the jump and check out the video demonstration.
END_OF_DOCUMENT_TOKEN_TO_BE_REPLACED


The 2011 Jeep Grand Cherokee is Chrysler’s biggest bet this year. It is the first all-new model launched after the US carmaker was taken over by Fiat and promises to kick start sales once more.

In order to really drive the point home, Chrysler has released the first ad for the new Grand Cherokee, designed to emphasize the patriotism of a car designed and made in the USA.

Chrysler’s new ad campaign will also feature this theme, so get ready to see more commercials in the following months. Until then, hit the jump and check out this new footage with the 2011 Jeep Grand Cherokee SUV.
END_OF_DOCUMENT_TOKEN_TO_BE_REPLACED


One month ahead of the launch of the 2011 Jeep Grand Cherokee, the off-road brand decided to shed some more light on the model that promises to relaunch sales.

The new SUV will use independent front and rear suspension but will still be able to tow around 7,400 lbs. Throw in the greatly improved exterior design as well as the promise of a best in class interior and the 2011 Jeep Grand Cherokee is looking extremely good.

Prices are set to start from $30,995 for the base 4×2 version and $32,995 for the 4×4 edition. Expect the new Jeep Grand Cherokee to hit dealerships next month. Until then, check out the photo gallery below and then hit the jump for a video of the new SUV in action.

END_OF_DOCUMENT_TOKEN_TO_BE_REPLACED


Chrysler is betting big on the upcoming 2011 Jeep Grand Cherokee, the first all new model since the carmaker was bailed out by the government and saved by Fiat.

With the new SUV, the Pentastar hopes to get Jeep back on top of its off-road game. Judging by the things we heard up until now and by the looks of the new Grand Cherokee, the future model might finally get the company on the right track.

Chrysler doesn’t want to comment on the subject, but seeing as how BMW has its X5 M performance variant, the 2011 Jeep Grand Cherokee SRT8 does have some things going for it. Reports are also speculating that the powerful GC will arrive in 2012, at least, in order to give the two other variants some breathing room.

Either way, SRT8 or no SRT8, the 2011 Jeep Grand Cherokee, by all accounts, will no doubt score some sales for the Pentastar. Still, until the end of the year when it will enter the market, we have some waiting to do.

END_OF_DOCUMENT_TOKEN_TO_BE_REPLACED


The 2011 Jeep Grand Cherokee promises to be one of the biggest wins for both Jeep and for Chrysler in general, and will finally put the off-road brand back into the media spotlight with the quality and performance of its vehicles.

While the official announcement of the model has yet to be given, we already have an idea about its looks, thanks to some spy shots taken at the end of last year, but now we also see that the new Grand Cherokee will be more than at home off the road, as new pictures were posted on the Jeep Jamboree Facebook page.

The photos in question, as you can see above, show a pair of 2011 Jeep Grand Cherokee models take on the famous Rubicon Trail, in order to get the highly coveted Trail-rated badge. The course is extremely demanding, but it seems the new models had no problems traversing its challenges.

You can head on over to the Jeep Facebook page, and while you’re at it, you can also become a fan of RPMGO by clicking the dedicated app running in the right hand side of the page.

END_OF_DOCUMENT_TOKEN_TO_BE_REPLACED


While the Jeep Grand Cherokee is a quite a skilled off-road model, at least for Europeans, its looks haven’t really impressed. But according to some recent spy shots which surfaced showing the new model around Detroit, Michigan, the new one will change that.

Revealing a much more stylish car, the spy shots convey a matte black Grand Cherokee with almost no camouflage. I’m quite sure that many of you will find the design line quite interesting, and it should, as it is mostly inspired from the BMW X5 model, especially around the back.


Hopefully Fiat will realize the potential that this model will have and help Chrysler push it into the mainstream market. What do you think? Is the new 2011 Jeep Grand Cherokee something you would be interested in? Leave a comment to the article with your thoughts.

END_OF_DOCUMENT_TOKEN_TO_BE_REPLACED


The Center for Auto Safety has just revealed that it is petitioning the NHTSA (National Highway and Traffic Safety Association) to commence investigating over 3 million Jeep Grand Cherokee models, due to their plastic fuel tank being position in such a way that will make combustion quite probable.

It seems that because the gas tank is located behind the rear axle and below the bumper, when smaller vehicles that the big Cherokee crash from behind, the tank might rupture. Adding to the danger that this presents, the Center also states that the fuel filler neck can easily be sheared off during accidents and lead to fuel spills on the road.

While the NHTSA is taking into consideration the start of the test, Chrysler has already issued a statement in which it says that the Cherokee will come out of it with flying colors. Sadly though, it seems that the files from the NHTSA revealed that pre-2005 Jeep Grand Cherokee models were involved in 172 crashes with fires, resulting in 254 deaths, while the vehicles made after 2005 in just one accident and one death.

But in case you’re a 1993-2005 Jeep Grand Cherokee owner, you might want to stay tuned for more news in the following weeks.