Lexus decided to reveal its beautiful 2013 GS 450h, before the car’s public debut this week at the Frankfurt Motor Show. It looks just about the same as the standard model, except for the three-lamp headlights, the 17-inch alloys and blue-tinted logos.

The Japanese automaker says that the car’s fuel consumption has been reduced by more than 30% in comparison to the standard version by installing a brand new Power Control Unit as well as reworking the regenerative brakes. 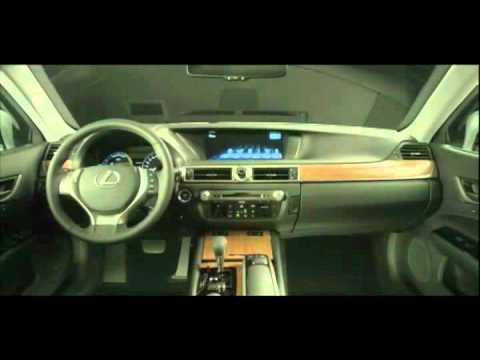 Some of you have probably been waiting for Lexus to unveil the 2013 GS for months now. It finally happened at the Pebble Beach Concours d’Elegance and I must say that it is one of the best looking cars of this year.

The Japanese automaker said that the car was developed in order to be contemporary and spacious, and as we can see from these official photos, it borrows the sporty design that we’ve seen in the LF-Gh concept at the New York Auto Show. It will come with a “spindle” front grille, LED-infused headlights, while at the back it will have a diffuser and a dual exhaust system.

The interior of the 2013 Lexus GS will be very luxurious, featuring seats wrapped around in leather, ambient lightning, a wood trim and an analogue clock. Aside from these, the car will get an 8-inch infotainment display as standard while the cars fitted with the navigation package will benefit from a bigger 12.3-inch display. Aside from this, it will feature an energy-saving climate control system as well as an optional Mark Levinson audio system with 17 speakers.

Lexus will offer three engines for the 2013 GS, but the specifications have not been mentioned yet. What we do know is that the choices will be a 2.5-liter, a bigger 3.5-liter and a greener hybridized 3.5-liter power unit. The car will ride on an updated platform that features a wider track as well as a new multi-link rear suspension.

Sales are expected to commence at the beginning of 2012. Stay tuned for more information about the engines and the price tag.

A few days ago Lexus announced that they will be revealing the all-new 2013 GS 350 model on August 18th at the Pebble Beach Concours d’Elegance. They also invited some of the journalists from Motor Trend, Autoweek and Car & Driver to take the car for a test drive. Obviously, the exterior of the prototype test cars was wrapped around in plastic, but the interior was mostly free of camouflage. The design of the interior cabin looks like a more edgy LF-A-esque styling with a huge 12.3-inch information screen located above the center console and plenty of stitched leather on the dashboard.

Lexus told the aforementioned magazines that the new generation of the GS features an updated platform that measures the same 112.2-inch wheelbase like the outgoing model, while the overall length has increased to 190.9 from the previous 190 inches. In addition, width is also up by 0.8-inches and the roof is now 1.2-incher taller than it previously was. The 2013 GS is also 157 pounds (71 kg) lighter than the model it replaces and has a curb weight of 3,638 kg (1,650 kg).

The car will be powered by an updated version of the V6 3.5-liter engine and will be mated to a 6-speed automatic gearbox that will send all of the hp to the wheels in the back. There won’t be any V8 engines available for the car but Lexus promised to bring at the Frankfurt Motor Show this September a performance-tuned hybrid that will be based on the V6 3.5-liter unit. Later on, the Japanese automaker will roll out an F-sport trim level with both performance and styling upgrades. The car will be exhibited at the SEMA aftermarket show that will be held in Las Vegas.

According to our colleges from Autoblog, the 2012 Lexus GS and the Scion FT-86 concept will be making an appearance at the 2011 New York Auto Show that will take place in April. The redesigned GS will come with a sportier appearance and a brand new platform that will be shared with the next-gen IS model. Other info is not available at the moment, but most likely it will get the same engines as the current model, with maybe a few minor upgrades for added performance and efficiency.

The Scion FT-86 will be nothing more than a rebadged version of the Toyota FT-86 II concept that we just saw in Geneva last week. The only difference will probably be the use of a Subaru-sourced 2.0-liter Boxer power unit that can develop about 200 hp (203 PS / 149 kW).


Seeing as how the huge recalls from the beginning of the year are slowly being forgotten and that it has paid a $16.4 million fine in order to please the US authorities, you would think Toyota has a bright future ahead of it once more.

Well, you’re wrong, as the Japanese company has just announced a global recall, affecting 237,000 models. The cause of the recall comes from a batch of faulty engines, specifically the 3.5-liter V6 and the 4.6-liter V8, which contained bad valve springs, that can lead to engine stalling.

Owners will be notified all around the world, and a fix will be implemented as soon as possible.

END_OF_DOCUMENT_TOKEN_TO_BE_REPLACED


With summer rapidly approaching, people are once again aiming to showcase their rides to the public. Seeing as how you can’t even go outside with a stock car, accessories and various packages are the way to go in order to add that extra bit of flavor to your ride.

Lexus knows this and has just announced that it has cut prices on its F-Sport accessories packages, currently available for the IS and GS lineups.

You will now be able to order a suspension lowering kit for $1,450, for $4,495 you will also receive a set of new wheels wrapped in performance tires and if you want to go all out, you’ll get all that plus a new performance braking system for $8,995.

The sales on the F-Sport packages will start on June 1 and continue until the July 31.