When you’re the best and most popular player in basketball history, your garage is probably filled with awesome cars and once in a while you have to clean it up and get rid of the ones you’re not using. Because this is probably the case with this Mercedes Benz SLR 722 Edition owned by Michael Jordan and for sale on eBay right now at $429,998 (Buy It Now price). The SLR 722 Edition is powered by a V8 engine delivering 640 hp (480 kW) and 820 Nm (600 lb-ft) of torque and it features 19-inch black light-alloy wheels, upgraded lowered suspension, larger front brakes, a revised front air dam and rear diffuser and red “722″ badges. 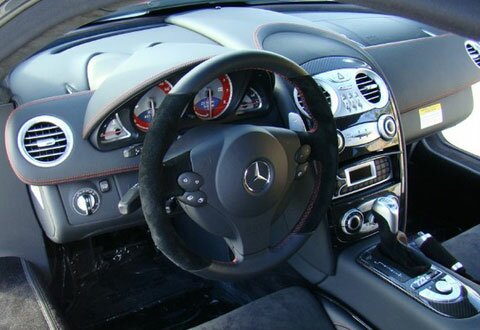 Pricing is a little high, but you have to consider the car has less than 1,000 miles on the odometer and it also has Mercedes Benz factory warning until August 2011 or 50,000 miles.

END_OF_DOCUMENT_TOKEN_TO_BE_REPLACED

With less than one month away until the annual Goodwood Festival of Speed (July 3-5), the organizers announced a special partnership with the Vodafone McLaren Mercedes Formula One team which will bring a few special events to fans attending the show. Motor racing enthusiasts will be able to see Lewis Hamilton driving Ayrton Senna’s 1988 McLaren-Honda Mp4/4 turbo in what will also be a special moment for the British F1 driver, who’s been a big fan of the legendary Senna. Hamilton will also take a few laps in the Vodafone McLaren Mercedes MP4-23 which took him to the top last year in the F1 World Championship.

Also, one lucky fan who’ll but a ticket for Sunday, July 5th, will get the chance to be driven up the Festival hillclimb in a Mercedes SLR McLaren, with Lewis Hamilton at the steering wheel. You wouldn’t want to miss this opportunity, would you? So if you had any doubts whether to go or not to the event, I think these doubts should be gone by now.

END_OF_DOCUMENT_TOKEN_TO_BE_REPLACED

Actually, the car’s name is Red Gold Dream, but considering we’ve gone half blind when we saw it, we couldn’t call it a dream, on the contrary, most be one of the most hideous creations ever. This red nightmare was created by Swiss designer Ueli Anliker and it was unveiled at the Auto Emotionen tuning show in Berne, Switzerland. This abominable car is the result of 30,000 work hours and $4.35 million invested in it. Why so much you ask? Well, to decorate the SLR, they used 500 rubys and a lot of 24k gold. And this is an excellent proof that if you use expensive materials doesn’t mean you get a work of art. Oh, and not to mention the horrible body kit, I mean, what’s with that front spoiler, reminds me a little from the Alien monster. Anyway, we’re not saying the creators didn’t put a lot of work into this car, but for Christ’s sake, next time please consult a real designer.

END_OF_DOCUMENT_TOKEN_TO_BE_REPLACED

No mention about how much this would cost, but we assume it ain’t pretty. And now here are a few quotes from the press release, which is, like we said before, really interesting (in not such a good way): “But, as these stunning pictures can only prove, Erturul ASMA has taken the McLaren to entirely new levels of automotive theatre. In fact, thanks to Perfectus, you can forget about the world of top-end tuning here on Earth, and now, and only now, think in terms of an awesome new age of carbon customization” or “Only Erturul ASMA can make and prove his claims of perfection, but he must also apologize… apologize to all the owners of standard SLRs everywhere, for there can be only one Perfectus.”

Check out more photos of the car after the jump. END_OF_DOCUMENT_TOKEN_TO_BE_REPLACED 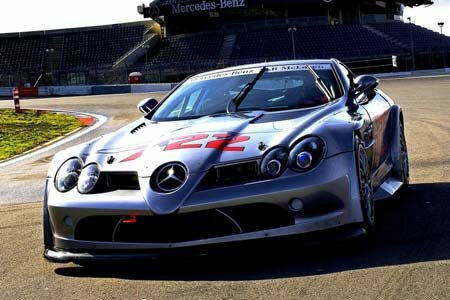 For those of you who don’t know, the Mercedes Benz SLR 722 GT is a track version of the SLR, powered by a supercharged 5.5 liter AMG V8, which delivers 680 hp and allows the car to achieve some really impressive performance numbers: 0 to 100 km/h (62 mph) in 3.3 seconds and a top speed of 314 km/h (195 mph). But there’s a downside to all this, of course. The car, which can only be purchased from RENNtech, has a very impressive pricing also, $1.2 million. You’d say that no one would be crazy enough to pay that much money for a track-only car, but it seems that there were a few rich folks who bought the car, because here’s a video of eight SLR 722 GT’s at an event organised by RENNtech. Enjoy!

Final Mercedes McLaren SLR Roadster to be auctioned in the US

We already know that the Mercedes McLaren SLR’s production is coming to an end and it seems that the United States will finally get one. Only one. The special final SLR will be sold in an exclusive online auction on November 20. Beside the 617 hp supercharged V8, the car also features an unique Sienna Pearl Super Metallic Paint finish with metallic elements, Tobacco Brown composition leather interior and 19 inch SLR wheels with special brake system fitted with gold brake calipers. The car’s price is $529,500 and all funds will go to St Jude Children’s Research Hospital. For more details, check out the Mercedes Benz USA website.

END_OF_DOCUMENT_TOKEN_TO_BE_REPLACED

Spy lap of the ‘Ring by the Mercedes McLaren SLR Speedster

The last version of the Mercedes McLaren SLR supercar, the Speedster, has prooved to be one intesively spied car, partly due to its quite innovative design. All the spy shots culminated with this video of a lap on the Nurburgring, that has been posted on the YouTube channel by german car show Auto Motor und Sport. Enjoy!

END_OF_DOCUMENT_TOKEN_TO_BE_REPLACED

The crash you see in these photos happened sometime during the morning of July 15th, somewhere in Qatar. By looking at what was left of the Mercedes SLR, we can tell that the car was travelling at very high speeds. And, as you’d expect, the 22 year old driver instantly died. We don’t have any other details so far, so we don’t know if the driver lost control of the car or it had some mechanical problems. All we know is that this accident really is terrifying and shows, once again, that supercars might be really really cool, but they’re definitely dangerous.

More photos after the jump.
END_OF_DOCUMENT_TOKEN_TO_BE_REPLACED

Mercedes ends the marriage with McLaren

Just as you were enjoying the new SLR spy shots, here I am to burst your bubble. The two companies will part ways in 2009. A Mercedes official said that they will not renew the agreement when it expires.

AMG will be making the new performance coupe from 2010, renaming it SLC. Just to confuse you a little bit more about all the Mercedes acronyms I guess.

Seems that Mercedes wants to focus on its core values again. After ditching Chrysler, they’re trying to get back to basics and be less distracted. They probably feel that their aura of engineering excellence is a bit dented after the reliability problems of the las few years.

The SLR had a moderate success, mainly due to a proce tag of around 452,000 Euros. They sold 1,577 of them, but they were plagued with technical problems.

We can only salute Mercedes returning to its old ways. Remains to be seen what the results will be.

We’re sure this is bad news to every car fan around the world, because, even though it didn’t had the success it deserved (Mercedes planned on building around 500 units per year but managed to sell 261 units in 2006 and 275 in 2007), the Mercedes Benz SLR McLaren is a very spectacular super car.

Jointly developed by Mercedes-Benz and McLaren Automotive and built in England, in Portsmouth and at the McLaren Technology Centre in Woking, Surrey, starting from 2005, the SLR stands for “Sport, Leicht, Rennsport”, which is German for sport, lights, racing.

And now, after quietly ending the SLR coupe production at the end of last year, it seems that the SLR production will end for good in 2009. And this will also mark the end of the cooperation between Mercedes and McLaren. Even though Mercedes owns 40% of the British company, they will not work together. Especially with McLaren preparing it’s own supercar, codenamed the P11, which is most likely to be introduced in 2011.

So, as we said, it’s sad to see the SLR coming to an end, especially with it being an important part in Mercedes’ and McLaren’s history and, why not, the auto history. However, we confort ourselves with the thought that, besides the P11, Mercedes will also come up with a supercar of its own and replace the SLR.

END_OF_DOCUMENT_TOKEN_TO_BE_REPLACED

Yup, that’s how much Afzal Kahn, head of the Kahn Design and Project Kahn, paid for the “F1″ license plate. More exactly, $870,000 ($740,000 plus taxes). Mr Kahn bought the license plate to put it on his custom made McLaren Mercedes SLR, so actually his plate worths more than his car. The “F1″ plate was registered in the UK long time ago, in 1904, back when it was just a license plate and F1 didn’t mean anything. And it looks like Bernie Ecclestone and Eddie Irvine tried to buy the plate in 2005, but wouldn’t pay the requested price.