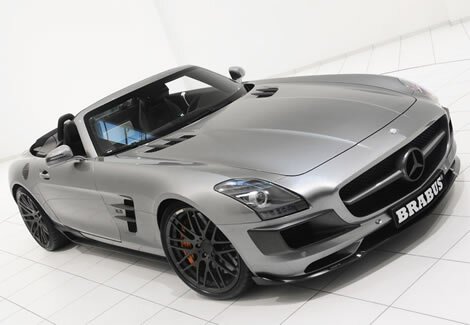 At this year’s edition of the Essen Motor Show, the German tuner Brabus has introduced its own version of the Mercedes-Benz SLS AMG Roadster. The car packs an extra 60 hp under its hood and comes fitted with a titanium high performance exhaust system that has “wake-up-your-neighbors” valves. 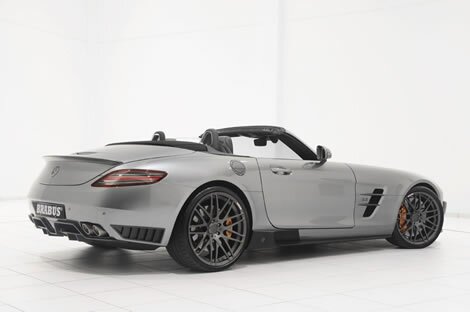 Under the hood of the SLS AMG is the same V8 6.3-liter engine found in the regular version but it has been updated in order to develop 611 hp (448 kW). To squeeze this additional power, Brabus remapped the ECU and installed a new exhaust system that has 3.3-inch tailpipes. This exhaust system weighs 26.5 lbs (12 kg) which makes it 40% lighter in comparison to the standard one. It features a set of butterfly valves that are automatically turned on when the driver selects the Sport mode. 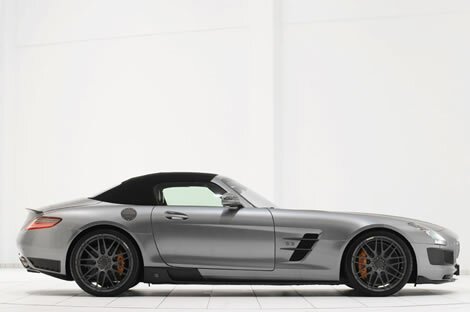 The new body kit developed by Brabus for the Mercedes-Benz SLS AMG Roadster comes with new front and rear spoilers, a rear diffuser, side skirts and a boot lid fin. The vast majority of the parts added by the German tuner are made from carbon fiber in order to keep the weight of the car as down as possible. 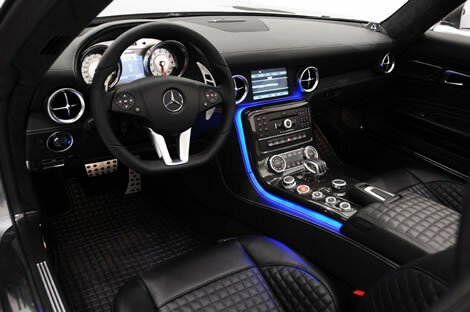 Inside the cabin, the sexy roadster adopts a 250 mph (400 km/h) speedometer, stainless steel sill plates that have the Brabus logo, matte-anodized pedals and a sport steering wheel. 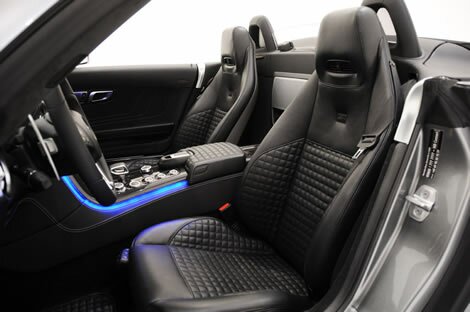 The car rides on a new set of 21- or 22-inch alloy wheels that are wrapped around in Yokohama, Pirelli or Continental tires. The SLS AMG Roadster has been lowered by 40 mm (1.6 inches) thanks to the Bilstein suspension. The driver can control the damper settings with the help of a button located on the car’s dashboard. The tuner is able to fit the car with its own Front Lift System that is very handy whenever you want to get the car over speed humps.

Mercedes SLS AMG E-Cell might be launched in late 2012

According to Ola Källenius who is the boss at AMG, the development of the Mercedes-Benz SLS AMG E-Cell is going well and the car might be launched towards the end of next year if everything goes according to the plan.

In an interview given to Autoblog.com, Källenius said that electric powertrains will play an important role in AMG’s future lineup and that some sort of kinetic energy recovery system (KERS) will make it into AMG cars.

We’ve been wondering when Mercedes-Benz will launch the ultimate version of its SLS AMG. Apparently we don’t have to wait much longer for the Black Series version of the car because a prototype was spied by the guys from Autocar on the Nurburgring track. The car is scheduled to go on sale in 2013 and it should cost 50% more than the regular coupe which is available for 168,395 pounds in the UK so you’d better start saving money right away.

According to Autocar, the German automaker decided to make the Black Series version of the SLS back in 2006 when the development of the AMG variant begun. When it will come out it will have a rather dramatic bodykit, featuring a big fixed rear wing, a rear diffuser, front splitter and more cooling on the hood, along with a wider track. We’ve already seen a similar bodykit on the SLS GT3 racer that was exhibited last year during the New York motor show.

Company insiders have revealed that the V8 6.2-liter engine of the SLS AMG will be able to develop around 600 hp and a peak torque of 500 lb.-ft. when the Black Series version will be launched. Some of the tweaks that will be implemented in the ultimate SLS will be a higher compression ratio, a larger air manifold, along with reprofiled camshafts. Also included will be a mechanical locking differential, while the engine will be linked to a dual-clutch, 7-speed gearbox in order to handle the additional torque.

Aside from the bodykit and the mechanical improvements, the Mercedes-Benz SLS AMG Black Series will lose 50kg and it will have an improved aerodynamic package, which should be enough for a 0-62 mph sprint time in only 3.5 seconds and a maximum speed of 208 mph. The regular SLS needs 3.8 seconds to hit 62 mph while its top speed is of “only” 197 mph.

One of the best looking cars in the world, the Mercedes SLS is going to get a Brabus version. The car will have its official debut in about a week at the 81st edition of the Geneva Motor Show.

There aren’t many details available at the moment about the car, except the fact that it will have a matte gray exterior finish, carbon fiber inserts on the air intakes, side skirts and front bumper.

The car will ride on some big wheels, probably 20-inchers, with a very nice multi-spoke design.

In other news, the German tuning firm is also going to bring to Geneva the 2011 “Brabus Rocket” that is going to be a very fast CLS-Class model. We can’t offer you any info about the car, but what we do know that it will be revealed next week so stay tuned.

Here is something that you don’t see every day, a revival of a very interesting 1970s Mercedes-Benz Gullwing prototype that never received the green light for production. GWA Tuning is responsible for this exciting car and they offered a modern flavor to this classic car.

First of all, let’s talk about the original car developed by the German automaker. In 1970 at the Geneva Auto Show, MB shocked the world with its very bold second C111 experimental test car and people immediately started dreaming about the revival of gullwing Mercs. For those of you that remember this car, it was one of the most sought-after vehicles of the decade, along with the Lamborghini Countach, the legendary Lancia Stratos (a car that also got a revival) and the Porsche Turbo.

Similar to its predecessor, the second iteration had a very lively orange paint which unfortunately isn’t available for the modern SLS.  The car was equipped with a 345 hp rotary power unit that was installed behind the driver and passenger seats and was linked to a 5-speed manual transmission. With its fiberglass body, the C111 II was able to reach 60 mph in just 4.8 seconds, onto a top speed of 186 mph (the magic 300 km/h mark of the 70s).

Although it was a hit at Geneva, Mercedes didn’t put the car into production because of the power unit. 10 years ago, Dr. Hans Liebold, the guy responsible for this car said that “The Wankel engine was not yet mature enough to be handed over to customers in line with company standards”.

Time to end the history lesson and talk more about the GWA Tuning Ciento Once. The engine under the hood of the car is a powerful 408 hp capable unit that is linked to a 6-speed Cima H type transaxle transmission. The car also benefits from a very special tuned exhaust system, a coil-over suspension while the braking system was borrowed from the Mercedes-Benz S55.

This modern iteration of a classic features a handmade aluminum body and an aerodynamically functional rear diffuser and front spoiler. In addition, it sports an electric-operated rear adjustable wing. With a curb weight of only 1,400 kg and with more than 400 hp under the hood, it should offer enough performance.

Moving inside the car we will find carbon fiber seats along with brushed aluminum pedals as well as illuminated door sills. The wheel-tire configuration is identical to the one found on the Mercedes SLS AMG as in the front you will find 19×9 rims wrapped in 265/35/19 tires and the back wheels measure 20×11, covered by 295/30/20 tires.

The price for this car has not been announced yet because the vehicle is still in its prototype phase. We hope that it will go into production as it is the perfect revival of a very interesting car presented back in the 70s along with other interesting models that changed the automotive world.