The normal behavior when buying a car for your family is to check out its safety feature. The first option for this is probably The National Highway Traffic Safety Administration and its crash-test results. So, the good news is that NHTSA will start rating 74 vehicles for the 2012 cars.

The list of tested vehicles in the next period includes 22 sports utility vehicles (some of them are Dodge Durango, Ford Explorer and Kia Sorento), 2 family friendly minivans (Chrysler Town & Country and Toyota Sienna) and passenger cars (such as Toyota Prius V).

This type of approach can only help families to better understand the safety level of the cars currently on the market, appropriate for their needs as family.

So, you would better check for “safety stars” on NHTSA’s website before buying a new car for you and your family.

How many “safety stars” does your current family car have? 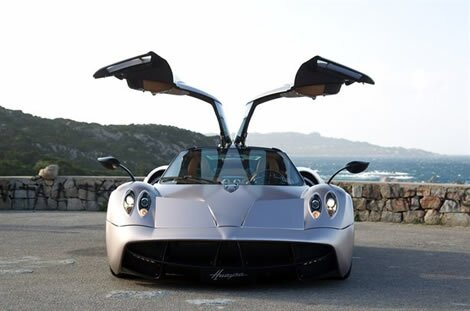 Those of you in the U.S. of A. who were waiting for the Pagani Huayra will have to wait a little bit longer as the car hasn’t been approved by the National Highway Traffic Safety (NHTSA) due to some issues with the airbags. When they heard the bad news, the officials of the automaker applied for exemption from the NHTSA’s requirements due to the reason that this would cause them “substantial economic hardship.”

This requirement for advanced airbags has forced Pagani to delay the release in the US of the Huyara from 2012 to 2013. These “advanced airbags” have been developed in order to protect kids by sensing when a minor is in the vehicle and applying a suitable airbag in the unfortunate event of an accident.

At first, the supercar maker said that they will bring five cars to the United States in its first year while for the second one they forecasted up to 10 units. As a reminder, the car comes with a massive V12 6.0-liter bi-turbo engine that unleashes 700 hp and has a peak torque of 664 lb.-ft. Featuring a lightweight carbon-titanium body, the Huayra is able to do the 0-62 mph sprint in only 3.3 seconds, on its way to a top speed of 230 mph.

It was only a couple of weeks ago when the Chevrolet Volt got top ratings for crash safety and now the National Highway Traffic Safety Administration (NHTSA) gave five stars to the car for overall vehicle safety. For those of you that don’t know, five stars is the maximum rating available.

To be more exact, the Volt earned five stars for side crash and rollover tests and four shiny stars for frontal collisions. NHTSA said the Chevrolet Volt comes as standard with electronic stability control, but it isn’t available with forward-collision warning or lane-departure. The agency increased the severity of the tests for the 2011MY cars due to the reason that lot of new models managed to do very well with the previous test regime.

These new modifications include the side-impact test that simulate a crash going on at 20 mph in a tree or a pole behind the windshield pillar on the driver’s side.

No word about NHTSA’s tests with the Nissan Leaf. We’ll keep you posted.

Volvo Recalls 350 Units Of Its XC90 Due To Steering Issues

Volvo will be recalling 350 units of its 2010-2011MY XC90 model due to the reason that the power-steering fluid may leak, which might lead to a sudden loss of power steering, according to NHTSA. The Swedish automaker said that this defect may result in a slow leakage, which will generate noise and decrease the power steering assistance gradually.

The company’s dealers will have to replace the oil pipes on the power steering rack for those 350 XC90 units. This recall will commence at the end of this month and owners can contact the company at (800) 458-1552.

Volvo stated that they will continue to investigate how this happened and will later on submit a more comprehensive report in regards of this matter.

It seems that Ford’s Freestyle crossover is under the investigation by the NHTSA, after 238 complaints regarding unintended “lunging” at slow speeds when the foot of the driver is not on the car’s accelerator pedal.

The National Highway Traffic Safety Administration is investigating approximately 170,000 units, representing the model years 2005 through 2007. 18 crashed resulted from this defect, and one of them caused a minor injury to a pedestrian in a residential driveway. NHTSA said that his knee was bruised and they also said that this problem is more severe when the Freestyle’s AC system is on or when the driver turns the steering wheel sharply.

The updated version of the 2011MY Scion tC coupe has managed to grab a 5-star rating from the National Highway Traffic Safety Administration. This shouldn’t come as a surprise when we take into consideration that the car packs eight airbags: driver & passenger, seat-mounted, along with driver & passenger knee and side-curtain airbags.

Add to this bountiful of airbags the ABS, stability control, traction control, electronic brake-force distribution, brake assist, along with the Smart Stop technology that helps prevent the car’s airbags from ever having to deploy.

Of course, these 5 stars can’t make it look good…

Source: Toyota via
After a much talked about report from the Wall Street Journal saying that unintended acceleration incidents suffered by Toyota models were caused by driver error, the preliminary findings of the National Highway Traffic Safety Administration also seem to point that out.

More specifically, out of the 58 cases of runaway Toyota models, in 35 cases the brakes weren’t even applied. The NHTSA investigators also said that in the rest of the incidents, the problem wasn’t electrical or software related. Instead, either the floor mat caused pedal entrapment, or the gas pedal was stuck from a mechanical standpoint.

This backs up Toyota’s own theories about the unintended acceleration scandal, and goes against claims from victims and lawyers that said that the incidents were caused by a glitch in the software of the car.

The NHTSA does highlight that these are just preliminary findings, and more will be known after NASA completes its probe into the Toyota incidents.

Honda recalls 383,000 Accord, Civic and Element models over ignition problems

If such a thing occurs and the parking brake isn’t engaged, the car can roll away on its own, if it’s on a slope.

Owners will be notified next month to take their cars over to the nearest dealership so that a new interlock system can be fitted. For more information, you can check out Honda’s dedicated web page, as well as call (800) 999-1009.