After 84 years of existence and about 40 million vehicles sold, on Saturday, October 31, Pontiac was officially pronounced dead. Marketed as GM’s performance division and living some glorious years in the past, Pontiac had an awful fate in the last decade, forcing GM to officially announce the company’s funeral.

Pontiac’s best years were the ’60s and the ’70s, especially after the GTO, the car that started the muscle car movement, was launched in 1964 and peaking with 1973, when 920,000 Pontiacs were sold, making it the third most sold brand in the United States. Since then, the company started going down and even though efforts were made in the ’90s and ’00s to revive it, 2009 was the year GM announced what everyone was expecting, that Pontiac will disappear by the end of 2010. And they kept their word. R.I.P. Pontiac!

END_OF_DOCUMENT_TOKEN_TO_BE_REPLACED


In case you were wondering about buying a car this holiday season, then you might want to check out some of the brands from General Motors, as the large corporation will be hosting some major sales for all of the models built under its various brands.

“All of our efforts will be to sell down our remaining 2009 inventory,” said GM’s VP of sales, Susan Docherty. She revealed that each car brand will have its own distinct promotion, with Chevrolet hosting “Red Tag Sales”, Buick and GMC going with “Holiday Event” while Cadillac will go with the classic “Season’s Best.”

This is also a great time to get the remaining Pontiac and Saturn models from dealerships as Docherty revealed that only 10,000 Pontiacs and 8,000 Saturns are still in stock. “We’re actually winding down those products quicker than we had anticipated,” she revealed.

This is some clever marketing from GM, which might generate a nice amount of money during this holiday season.

END_OF_DOCUMENT_TOKEN_TO_BE_REPLACED

Few Pontiacs are still available in retail stores, get them while they last


The news that GM would drop the Pontiac brand and phase it out from the United States made many fans sad. But for those of you who still haven’t bought one and want to get a car which will most definitely become a collectible, the company posted on its Twitter account the number of cars still available at dealers across the US.

It is expected that the remaining parts and technology will be shipped to Australia, where GM’s Holden brand will continue to build various Pontiac models for that country. For more details you can follow Pontiac, and while you’re at it, you might want to follow our own Twitter account for the latest news.

END_OF_DOCUMENT_TOKEN_TO_BE_REPLACED

Lingenfelter 455 TA, a Pontiac Trans Am concept based on 2010 Camaro, set to appear at SEMA


Well here’s a certain blast from the past, it seems that tuning and customization company Lingenfelter has decided to revive the glorious Pontiac Trans Am, basing itself on the 2010 Chevrolet Camaro model.


Although we only have a few sketches of the model, it is looking pretty good, giving the new Camaro a redesigned front fascia and rear end, a set of 20-inch honeycomb-style wheels with the obligatory wider tires, a hood scoop, air vents and, last but not least, a duck-tail spoiler.

According to the company, its interior will also be up to par, and remind many users of the original Trans Am models.

Overall, this is certainly a concept which many people will be glad to see at next weeks’ SEMA show in Las Vegas.

END_OF_DOCUMENT_TOKEN_TO_BE_REPLACED

Ebay has always been a great source for pretty interesting cars. For example, earlier today we had the Mini Cooper S owned by former Playmate Sara Jean Underwood and now here’s another cool find. This Lamborghini Murcielago LP640 replica is based on a 2009 Pontiac Solstice roadster and it has a starting price of $63,244. Under the hood, there’s a 325 hp 4 cylinder engine which takes the face Lambo from 0 to 60 mph in 5 seconds. That’s pretty fast. I mean, not Lambo fast, but fast. I have to admit, the car looks pretty interesting, but I’d say it wouldn’t make any sense wasting that much money for a fake Lambo. There are tons of other awesome cars you could buy for that money. Also, check out two video after the jump.

END_OF_DOCUMENT_TOKEN_TO_BE_REPLACED

We know, the title might sound really weird, but here’s what happened. The Clarke family, from Long Dittion, England, is very concerned about a black Pontiac Trans Am that has been parked in front of their house for about a month. But that’s no ordinary Trans Am, it has blacked out windows, 666 on the number plate and devils on all four wheels. We admit, that’s some we don’t see every day, but still, why would Satan drive a Trans Am?

“The car is like the spawn of the devil, it couldn’t look more evil if it tried. The only way it could look worse would be if it had horns. I’m beginning to think there is something dark and unexplained happening here. We want it moved from outside our house. The kids will be scared to knock on our doors to trick or treat. I have a serious concern people will associate us with satanic worshipping,” said Julian Clarke. He also added that “The number plate is 666, the number of the beast, and I’m worried that Halloween is coming up and the Satan is at our feet.”

So, unless Satan shows up this weekend, he’ll probably have his car towed away, because Mr. Clarke plans on calling the police to handle with this situation. It’s a crazy world we’re living in!

END_OF_DOCUMENT_TOKEN_TO_BE_REPLACED

Pontiac to drop the RWD G8?

A few years ago, Bob Lutz predicted that Pontiac will become some sort of American BMW, but it seems that things aren’t doing the great over there at GM. After GM announced that they dropped a possible Solstice replacement, there are some rumors going around recently about GM dropping the rear-wheel-drive G8, in about 5 years. This will mean that Pontiac will remain with the G5 and the upcoming G3, basically rebadged Chevrolet Cobalt and Aveo. Not exactly BMW material. Inside Line reports that these changes in Pontiac’s future plans were caused by the limited corporate resources and the fear of rising fuel-economy standards.

Looks like the folks from GM are really busy these days. After unveiling the new Volt a few days ago, today they released details on another new car for the United States, the 2009 Pontiac G3. Basically a rebadged version of the Chevrolet Aveo, the G3 will be powered by the 106 hp (79 kW) 1.6 liter Ecotec four-cylinder engine, mated to a five-speed manual or optional four-speed automatic transmission.

“The small car segment has literally exploded in recent months, with sales up nearly 33 percent in the first six months of 2008 alone,” said Susan Docherty, vice president of Buick-Pontiac-GMC. “With its proven success in other markets, we felt the time was right to bring the G3 into the BPG portfolio for our U.S. customers.”

Check out more photos after the jump. (more…)

With the “Tame the Name” promotion, GM tried to find the best name for the Pontiac G8 sport truck and their final decision was the “G8 ST”. Not very complicated, huh? Though a lot of us were expecting the “El Camino” name to be adopted, it seems that they’ve decided not to choose that name. “We actually thought very long about El Camino,” said Craig Bierley, BPG product marketing director for cars and crossovers. “In the end, we felt it was more appropriate to honor the El Camino’s unique place as part of Chevy’s heritage and not use that nameplate on a Pontiac.” After sifting through more than 18,000 possibilities, Pontiac has chosen to keep it simple, naming the recently revealed G8 sport truck the “ G8 ST.”

The Pontiac G8 ST basically creates a new niche, a sports car with truck-like cargo and towing capabilities. Sharing the basic architecture and 361 hp V8 engine as the G8 GT performance sedan, it will offer a 73.9-inch cargo bed that has 42.7 cubic feet of cargo space and can carry a payload of 1,000 pounds (453 kg) or tow a 3,500-pound (1,587 kg) trailer. The G8 ST will be available in late 2009 as a 2010 model and will be backed by GM’s industry best 100,000 mile, 5-year powertrain warranty. Pricing will be announced closer to availability.

After a few days ago it showed up on the Pontiac website (Pontiac mistake or not?), the Pontiac Solstice Coupe was unveiled today at the New York Auto Show. Based on the roadster’s success and inspired by classic cars, the Solstice Coupe was created starting from the concept presented six years ago at Detroit.

The coupe is powered by a standard 2.4-liter Ecotec four-cylinder engine that generates 173 horsepower (129 kW), while the GXP version is equipped with a 2.0-liter turbocharged Ecotec engine with 260 horsepower (194 kW). What’s interesting about the car also features a removable roof panel, which fully opens the cockpit.

Jim Bunnell, Buick-Pontiac-GMC general manager said: “Today’s Solstice is the top-selling roadster in the U.S., and we believe this new model has even broader appeal [...] The coupe has all the design cues and pleasing performance of the original roadster, and is an all-season alternative for people who enjoy open-air driving.”

Check out more photos of the Pontiac Solstice Coupe after the jump.

END_OF_DOCUMENT_TOKEN_TO_BE_REPLACED

At the New York Auto Show, which will start on Wednesday, among a lot of premieres, Pontiac will also unveil the new Pontiac Solstice. Ok, so far so good. However, guess what an autoblog reader found, while he was taking a look around the official Pontiac website. Yup, the Solstice. Not a very impressive image (it’s small and shows the rear of the car) but at least we’ve got something to look at until Wednesday. For more info on the Solstice, stay tuned as we’ll bring you more details after the official announcement.

END_OF_DOCUMENT_TOKEN_TO_BE_REPLACED 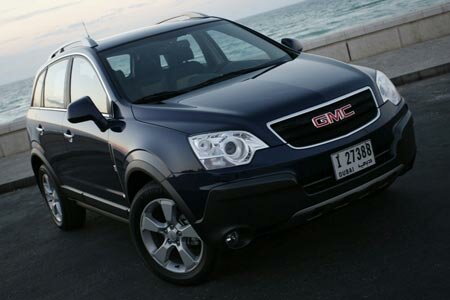 Remember the GMC Terrain, which debuted at the Dubai Motor Show. We wrote about it here. If the first impression was that this is just another rebadged Opel Antara/Chevrolet Captiva/Saturn Vue for the Asian market, it seems this model is more important than that. Because the GMC Terrain is also going to be sold in the US, where it will replace the Pontiac Torrent. Interesting move from GM.

GM announced today that in January they will recall about 57,100 vehicles due to some safety issues occurred. The cars affected by this recall are the 2007 Chevrolet Equinox and Pontiac Torrent which are not equipped with optional roof rail airbags or optional sunroof.

The safety problems showed up during NHTSA impact tests, which indicated a possibility of an increased risk of head injury in a crash. To fix the problem, dealers will install an energy absorbing foam piece to each of the a-pillar trim assemblies.

END_OF_DOCUMENT_TOKEN_TO_BE_REPLACED

The 2009 Pontiac Vibe will be powered by a 1.8-liter engine and five-speed manual transmission for the standard version and a 158 hp 2.4 liter engine for the AWD and GT models. It will have standard safety features like four-wheel disc brakes with ABS, StabiliTrak electronic stability control, six airbags and OnStar.

If you want to see more details on the 2009 Vibe, you can get it from www.pontiac.com/2009vibe. Meanwhile, check out more photos after the jump.