About one year ago, the tuners from Edo Competition launched an upgrade program for the Porsche Panamera Turbo which increased the output of the engine to 750 hp. Now they’ve taken the Turbo S version of the Panamera and installed new turbochargers, exhaust manifolds, air filters and catalytic converters. Aside from this, they’ve also tweaked the car’s ECU.

Aside from these upgrades, the tuners also installed a lowering module that brings the Panamera Turbo S closer to the ground by 30mm. It rides on a new set of 22-inch rims that have a carbon-fiber finish, wrapped around in wider and stickier rubber. 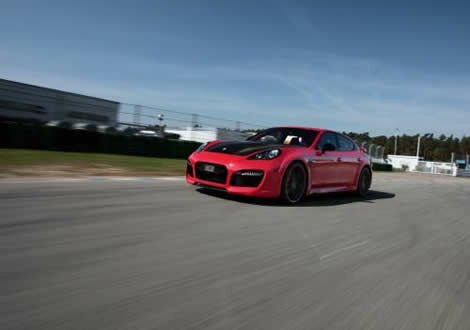 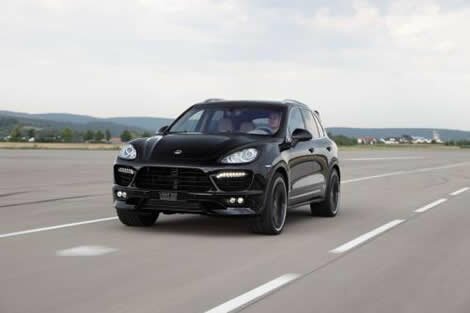 Yet another tuning program for the ugly Porsche Panamera has been launched, this time from Anderson Germany. The most important feature of this program would have to be the power boost for the twin-turbo V8 4.8-liter that now produces 577 hp (585 PS / 430 kW) , which is considerably more than the standard 493 hp (500 PS / 368 kW). They’ve managed to do this by installing a new sport exhaust and remapping the ECU.

As for the bodykit, the Porsche Panamera by Anderson Germany features huge front & rear vents, LED headlights, a lightweight carbon hood, a rear spoiler/wing and LED taillights. In addition, it packs an adjustable suspension that brings the car closer to the ground by 40 mm once you push a button. The Panamera Turbo rides on 22 inch wheels that are wrapped around at the front in 265/30R22 tires and at the back it has 295/25R22 rubber.

The organizers of this year’s American Le Mans series have bad tastes as they have chosen the awful-looking Porsche Panamera Turbo as the safety car of the competition. In addition, they also got two Porsche Cayenne ALMS Emergency Response Vehicles, which is another hideous car to say at least.

The Panamera Turbo will be a standard version as there isn’t going to be any engine tuning, which means that it will have the regular turbocharged V8 4.8-liter engine that produces 500 PS (368 kW).

More info about the cars will be revealed pretty soon. Stay tuned.


Porsche surprised a lot of people when it first introduced the Panamera four-door sedan last year. But despite the controversial design and the fact that it takes the German sports car manufacturer into a whole new direction, it seems that the Panamera was just what Porsche needed.

According to the latest estimates, 22,518 Panamera models were sold during the first year of the German super sedan’s life.

As testimony to the desire for speed, the 394 HP Panamera 4S has been the most popular, followed by the range-topping 493 HP Panamera Turbo and the regular, rear-wheel drive Panamera S. It should come to no surprise that the city with the most Panamera models sold was Los Angeles, with a whopping 890 German sedans rolling through the streets of Southern California.

So, even though fans didn’t like the four-door and people were against the design, the Panamera has proven successful where it counts, sales.

END_OF_DOCUMENT_TOKEN_TO_BE_REPLACED


Just in case you something a bit more special out of your super sedan, the Porsche Panamera Personalization Program has just been revealed, including new accessories as well as power upgrades, you know, just because we’re talking about Porsche.

Let’s start with the simpler things shall we? Customers can now opt for the Sport Design Package on any new Panamera. This includes a revised front fascia, with wider air intakes, as well as a redesigned rear apron with new diffusers and fins. Side skirts and new 20-inch wheels are available, for that extra dose of personalization.

If you really want to spend some money though, then the Powerkit for the Porsche Panamera Turbo is right up your luxurious alley. In case the top-of-the-range Turbo didn’t have enough power, this kit, as its name suggests, adds even more. 40 HP and 37 lb-ft, more specifically, taking the output to a final 540 HP and 553 lb-ft. What’s more, the Powerkit includes the Sport Chrono Turbo Package, which, if the car is in Sport Plus mode, upgrades the torque output to an even more dizzying 590 lb-ft.

All this extra power means the Panamera Turbo can sprint from 0 to 62 mph in 3.9 seconds, and up to 190 mph, all while keeping its EPA-rated fuel average of 15 mpg in the city and 23 mpg on the highway.

While the Sport Design Package may no cost all that much, $4,590, the Powerkit is definitely going to blast away the upgrade budget, as it is priced at $21,730.

END_OF_DOCUMENT_TOKEN_TO_BE_REPLACED


At the end of last year, European tuning company Mansory revealed the first renders of its special tuning kit for the Porsche Panamera Turbo, detailing a more aggressive and lightweight body kit, as well as a power increase.

A few weeks ago, the finished product was revealed. While we could most certainly applaud the new power ratings of 681 HP plus 516 lb-ft of torque, the biggest (and worst) reactions were aimed at the horrible exterior paint job, combining a bright cobalt blue with electro-yellow.


Unhappy with the result, Mansory’s US importer, RTW Motoring, released a fresh batch of photos with the tuned Panamera Turbo. The photos serve as a tease for the US debut of the upgraded model, set to take place at the Orange County Barret-Jackson Car Auction, on June 24.

As you can see above, decked out in a more normal shade of white, the Mansory Porsche Panamera Turbo isn’t half bad. Still, it’s going to take a long time before we can forget that horrible paint scheme.

END_OF_DOCUMENT_TOKEN_TO_BE_REPLACED

The new model didn’t just attract rich people that want to haul around their family with them, but also a German taxi driver, who opted to turn the powerful Panamera Turbo into a cab and drive customers around through Hamburg (from what we can tell, as our German is a bit rusty).

As such, the 493 HP Panamera Turbo was decked out in the traditional taxi color from Germany, fitted with a meter and it now offers thrills to anyone willing to hail it. Still, we dread to think what the fee is. Anyway, hit the jump to see this Porsche Panamera Turbo Taxi in action.
END_OF_DOCUMENT_TOKEN_TO_BE_REPLACED

SpeedART details its performance packages for the Porsche Panamera Turbo


Where plenty of people saw a sacrilege to the brand, many customization companies saw a blank canvas perfect to squeeze money out of. In case you didn’t realize, I’m talking about the Porsche Panamera, which has seen quite a lot of tuning attempts since it was released.

The latest company to make its intentions public is SpeedART, which has detailed its two performance and styling packages for the Porsche Panamera Turbo ahead of their release at the Essen Motor Show, which is going on at the beginning of December.

The Panamera PS9, as it is codenamed, will see its power increased to a whopping 650 HP and 890 Nm, thanks to an enlarged turbocharger, a sports exhaust system, a new performance catalyst and, the old favorite, a revised ECU. THis means that the German super sedan will sprint from 0 to 100 km/h (62 mph) in 3.5 seconds, and stopping at a speed of over 200 mph. In case this is a bit too much power for you, there are two other performance kits which will give the Panamera Turbo 550 and 600 HP>


On the outside, the PS9 Panamera Turbo received a new body kit which consists of a front chin spoiler, new hood vents, a rear diffuser, a roof spoiler, side skirts and a modified rear bumper, complete with air outlets. Rounding off the styling package will be a set of 22-inch three-piece “LSC FORGED” wheels. On the inside, customers will see a sport steering wheel with shift paddles, available in many finishes like aluminum, wood or carbon fiber, revised instrument dials, new floor mats and a carbon fiber trim.