Volvo Recalls 350 Units Of Its XC90 Due To Steering Issues

Volvo will be recalling 350 units of its 2010-2011MY XC90 model due to the reason that the power-steering fluid may leak, which might lead to a sudden loss of power steering, according to NHTSA. The Swedish automaker said that this defect may result in a slow leakage, which will generate noise and decrease the power steering assistance gradually.

The company’s dealers will have to replace the oil pipes on the power steering rack for those 350 XC90 units. This recall will commence at the end of this month and owners can contact the company at (800) 458-1552.

Volvo stated that they will continue to investigate how this happened and will later on submit a more comprehensive report in regards of this matter.

The recall should start before the ending of this month, once the dealers get the necessary supplies of the updated brake caliper bracket. They will have to replace the old one with the redesigned front brake caliper bracket as well as replace the front brake pads in order to provide accurate alignment between the rotor and the brake pads. In addition, they will also check the brake fluid for signs of overheating and replace it, if necessary.

The French automaker Citroen has issued a recall that concerns more than 20,000 C3 Picasso units that were sold in UK due to a rather strange, yet very funny reason: the brakes of the car can be activated by the passenger sitting in the front when pushing their feet in the footwell. This issue was discovered by Watchdog, a BBC TV show that was alerted about this problem from a cleaning company that owns three C3 Picassos.

That UK TV show has figured out the reason behind this problem and they said that a manufacturing error occurred during the right-hand drive assembly process of the units made for the United Kingdom market. Although the brake pedal is installed to the right, it still remains connected to a mechanism located on the left passenger side. This mechanism is apparently covered only by a very thin piece of felt, making it very easy to activate from the passenger side.

Watchdog did some further testing with other two Citroen C3 Picassos that were on sale at the company’s dealerships in the United Kingdom and they discovered that both units had the exact same problem.

Citroen replied that they didn’t receive any reports regarding this issue before, but they will issue a recall action to take care of the problem on those 20,000+ units.

A few weeks ago General Motors issued a recall concerning certain 2011MY Chevrolet Cruze units due to potential problems with the steering wheel that might come loose from the steering column. This recall affects 2,100 units.

Now, GM has announced yet another recall, involving 154,112 units of its 2011MY Cruze, the ones built in North America starting with last summer. The reason behind this decision is also related to a steering issue, and General Motors said that they want to check the car’s steering shaft to see if it was properly installed. GM did not say whether these two recalls are related in any way, but they’ve did stated that in this latest action they want to check another potential problem that might concern about 120,000 units fitted with an automatic gearbox.

The good news is that no accidents have been reported due to these issues.

Just about every car manufacturer out there has issued a recall for at least one of its models. However, not many of them (or better said, none) did this over fears that the fuel tank may fall off. Kia has issued a recall for 58,322 Spectra models (2004-2007MY, United States) built from November 7th, 2003, until March 6th, 2007. This recall concerns the cars sold or registered in the states that rely heavily on road salt for melting the ice during the wintertime.

Kia informed the NHTSA that there is a possibility that because of prolonged exposure to salt, the fuel tank straps that hold the tank may rust, and the tank might fall on the road, causing a fuel leak and in a worst case scenario, a fire.

The automaker said that these fuel tank straps will be replaced, and they will also attach new hardware with zinc-coated parts, free of charge. The safety recall will start this June.

PS: No wonder Kia’s motto is “The Power to Surprise”… Losing the gas tank of your car, now that’s what we call a surprise!

The NHTSA has initiated an investigation regarding the 2011MY Kia Sorento for possible driveshaft failure that results in a sudden loss of power. The National Highway Traffic Safety Administration stated that there have been four complaints regarding the intermediate driveshaft and another five about power loss due to a transmission failure that might be related to a driveshaft problem. This investigation will look into about 50,000 units of the Korean CUV.

In addition, it seems that some of the 2002-2003 Subaru Impreza models have problems regarding corroded lower control arms. The Detroit News says that there have been seven complaints stating that the control arms on the Impreza can break at more than 50 mph, two of them saying that due to this issue, their cars went out of control. This investigation affects 84,000 Imprezas.

Source: The Detroit News via AutoBlog

Because of a single incident that occurred on March 1st this year, when General Motors was notified that one 2011MY Chevrolet Cruze was brought to one of the dealerships due to a steering wheel that had come loose from the steering column, GM has decided to issue a voluntary recall on certain Cruze units. According to the automaker, during the manufacturing process, the car’s steering wheel might have been improperly fastened and there is a possibility that it could detach from the steering column.
END_OF_DOCUMENT_TOKEN_TO_BE_REPLACED

Mercedes will recall 136,751 units of its M-Class models delivered in the United States because of a defect associated with the car’s cruise control system. This recall involves the 2000-2004MY and it will commence in September this year.
(more…)

Several recalls have been announced in the last few days and we thought to offer some information about the cars affected. Let’s start with the 2011 Honda Odyssey.

Just two weeks ago the Japanese automaker Honda issued a recall for 33,341 of its Odyssey 2011MY units due to a potential problem with the windshield wiper linkage roads. Now, a second recall has been issued for the same 2011MY. They said that they will voluntarily recall about 2,800 units because of a problem with the side windows.

According to the car manufacturer, there is a potential for one or both windows to become detached from the window regulator, which will cause the window to stop working, thus preventing it from being rolled up or down, or it could even drop into the floor. Worst case scenario, Honda said that the window may bind and shatter onto the passengers, but the good news is that this hasn’t happened yet.

They said that they will start sending notifications to the owners affected by this recall and they will replace either the passenger’s and/or the driver’s front door window glass, free of charge.
END_OF_DOCUMENT_TOKEN_TO_BE_REPLACED 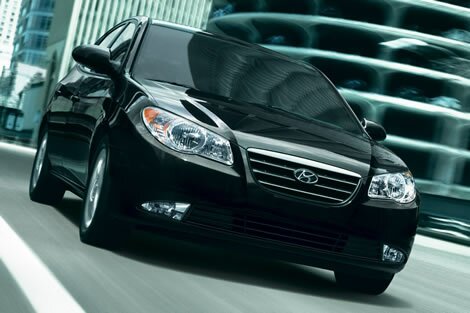 The Korean automaker Hyundai has issued two separate recalls for the Elantra model over airbag related issues. The first one affects about 95,783 Elantras 2007-2008MY manufactured between July 14, 2006 and August 29, 2007. For these cars, the airbag control module might receive an unstable electrical signal from the seat track position sensor which might lead to the deployment of the driver’s airbag at a higher pressure than intended. To fix this problem, the automaker’s dealers will have to reprogram the airbag control module, free of charge.
END_OF_DOCUMENT_TOKEN_TO_BE_REPLACED

The company added that over time, the corrosion of these pipes might lead to the pin-holing of the pipe, allowing pressurized power steering fluid to leak into the under-hood and engine bay area. Jaguar added that aside from causing a loss of power assist steering, this leaked fluid could ignite if it comes in contact with a hot surface or an ignition source, leading to a vehicle fire.

The recall should begin on or before April 11 and the automaker’s technicians will have to replace the power steering fluid pipes with parts made to the required corrosion protection specification. This procedure will be free of charge.

Even Honda which sells probably the most reliable cars in the world is having problems with one of their models. We are talking here about the US-spec 2011 Civic model which has a problem with a possible defective fuel pump module. The Japanese automaker will recall 18,056 Civics from the 2011 model year.

According to NHTSA – National Highway Traffic Safety Administration, the roll-over valve inside some fuel pump modules may have been damaged during the car’s production phase and might cause fuel leakage in the event of a roll-over incident. The good news is that no injuries or crashes have been reported because of this problem.

Honda’s dealers will have to inspect the Civic’s fuel pump module and if it is necessary they will replace it, free of charge of course. The safety recall will begin on or before April 11. If you are one of the 18,056 owners, you can contact the company’s customer service department at 1-800-999-1009.

The Korean automaker Kia has issued a recall on 70,115 Optima sedan units that were manufactured between September 29, 2005 and June 13, 2007 due to a problem related to the transmission that might cause the vehicles to roll even while they are in park.

Kia said that some of these cars might have a transmission shift cable that was not installed properly and can become detached from the shifter. If this happens, the Optima would stay in the last used gear before the detachment of the cable, even if the driver moves the shift lever to the park position.

Luckily, the company said that they haven’t received any reports with injuries related to this potential problem. This safety recall will begin next month and affects the 2006-2008MY Optima sedan models.

PETA Has The Solution For Your Mazda’s Spider Problem!

Two days ago, we’ve mentioned that Mazda has issued a recall for 52,000 units of their 6 model because the evaporative canister vent line might be the perfect home for a species of spiders. If the web clogs the line, excessive negative pressure might build up in the fuel tank, which may lead to the cracking of the tank.

Anyway, People For the Ethical Treatment of Animals (PETA) is offering the “best” solution to this problem – they want those 52,000 owners to donate their cars! They’ve said that once the spider problems are eliminated, they will use the donated Mazda 6 sedans to champion their cause. The organization affirmed that this won’t be the first time they have received cars from animal loving donors.

A while ago, a member of the PETA organization who was scared of mice donated her brand-new Jeep to the organization after she found a mouse living in it. Have you ever heard something more ridiculous than that?

The list of recalls doesn’t seem to end for Toyota as the National Highway Traffic Safety Administration has announced recalls for yet another 22,000 trucks and SUVs due to improperly calibrated tire pressure monitoring systems. The cars in question are certain 2008-2011 FJ Cruiser, Tundra, Tacoma, Land Cruiser and Sequoia models that have been fitted with TPMS units that were not properly calibrated.

Due to this issue, the dashboard warning light may fail to illuminate in the event of a deflated tire, which according to NHTSA, might lead to accidents. The Japanese automaker will recalibrate the tire pressure warning systems without charging the owners. No word about when the recalling procedure will begin.