The Taiwan-based Luxgen company will reveal this month at the 2011 Shanghai Auto Show its new Neora Concept, an all-electric sedan that has a high-tech interior and a sculpted exterior. Luxgen is an independent Taiwanese brand that develops next-generation electric cars and from their sketches we can see that the Neora (from Neo and Era) comes with a beautiful sculpted body and an extensive use of the LED technology, with the taillights using a high-tech blue light.

The interior cabin of the car was inspired by consumer electronics, featuring generous interactive displays and an infotainment system that was developed in partnership with the Taiwan-based mobile phone company HTC.

The Luxgen marquee might make its official European debut at the end of this year with the launch of an SUV model.

Inspired by the design language of the Vision D Concept, this is a study of a rally car created by Pavel Hruby for the Czech magazine AutoDesign&Styling. The vehicle show what a new rally car from Skoda would look like, and is based on the latest design idiom which we saw last month during the 81st edition of the Geneva Motor Show. 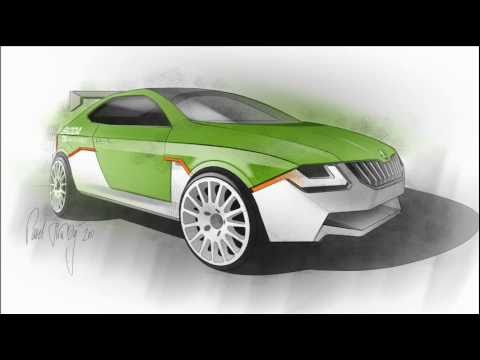 The exterior of the rally car features the traditional sharp and precise edges that were adapted for a rally car that has less constraints regarding production feasibility. AutoDesign&Styling commissioned this project and it was published in the latest issue of the Czech magazine, with the title “Go, Skoda, Go!”

The guys over at Audi have revealed this week the first two sketches with the upcoming R8 GT Spyder, which is going to be a lightweight version of the original model, distinguished by a matte titanium splitter and LED taillights. In addition, it will pack a very aggressive rear diffuser, bespoke 19-inch alloy rims and a carbon fiber rear wing.
END_OF_DOCUMENT_TOKEN_TO_BE_REPLACED

Arturo Arino is a Mexican industrial designer and his latest creation is an imaginary hybrid racer that is road-legal. Dubbed the “Reptile”, it packs a 2.7-liter Wankel rotary engine that produces a theoretical 700 hp (552 kW) @ 9,000 rpm, along with a 4-pole electric induction motor and regenerative braking to give juice to the batteries.
(more…)

Here is an excellent design study of a two-seater lightweight sports car. Dubbed the Reptile Hybrid Concept, it features open wheels and a hybrid powertrain with a Wankel power unit. Arturo Arino is the designer of this cool concept and the idea behind this rendering was to create a lightweight racing car that can also be used on the road.
(more…)

More details on the upcoming Audi A7

Today, Car Magazine published more details on Audi’s upcoming four-door sedan, the Audi A7. The car will be built on Audi’s next generation lightweight aluminum A6 platform and will be offered with a range of V6 engines, like the 2.8 liter FSI or the 3.0 liter turbo. Power will be transfered via six and seven speed manual, automatic and S-tronic gearboxes. Of course, Audi will also offer S7, RS7 and coupe-cabrio (rendered above) versions. The top of the line RS7 will be powered by the 5.0 liter twin-turbo V10, while the S7 will get the same engine, but delivering less power. Also, it looks like Audi is planning on offering a hybrid version. Though only rumors so far, estimated starting price will be at around $73,000.

Car Magazine says that Audi will have problems with its competitors already available on the market, but I wouldn’t agree with that, because let’s take the Q7 for example. Mercedes and BMW had a SUV in the range long before Audi, but that didn’t stop the Q7 from becoming a big success for Audi. And I think the same will happen with the A7, which starts to look like a very promising car.

END_OF_DOCUMENT_TOKEN_TO_BE_REPLACED

What the Mercedes Benz CLC could’ve been

A few days ago, the new Mercedes Benz CLC (which is actually the new SportCoupe) was introduced. The SportCoupe was never a big success for Mercedes, because it’s not a hatchback, it’s not a coupe, it’s something in between, which I don’t think has too much appeal. Anyways, since they’ve created the new generation, guess it’s worth it for them. I have my doubts, especially considering that the CLC is based on the old C Class platform and I don’t know if customers like that.

However, yesterday these sketches showed up on Carscoop which claims these are the designs that were not accepted by the guys from Mercedes to go into production. What do you think, comparing to the production version, these are better or worse? Check out the sketches after the jump.