If you are the owner of a Jaguar XK8 but you want something different, here is what you could do: turn it into an Aston Martin DBS, sort of. This is what an eBay seller did with his ’98 XK8 and he listed a “buy it now” price of $50,000 for his replica. As you might have expected, there are no bidders for his car at the moment and I don’t think there are going to be any for that price tag.

This replica doesn’t look that bad if you look at it from the front and the sides. The situation however changes if you take a closer look at the back where things went terribly wrong as it slopes downward too much on both ends, mainly because the back of the Jag isn’t as wide as the one on the DBS. It has a sad and depressing look.


The Bugatti Veyron is one very expensive hypercar, as it currently costs well over $1 million in ‘stock’ form, and can go way above if you opt for one of the plethora of special editions or luxury features.

Now, things have gone even crazier, as a replica of the Bugatti Veyron, made out of 24 karat gold and studded in 7.2 carats worth of diamonds has been revealed. The price for this 1:18 model of the expensive hypercar? Just $2.9 million (£2 million, exactly).


Still, for that money you’ll be getting a replica with fully-functional doors and hoods, plus a working steering system. Only three models will be made, courtesy of Robert Gulpen of Munich & Stuart Hughes of Liverpool.

So, interested in buying an expensive car or an even more expensive replica? The choice is yours, but no matter what, your wallet is gonna cry.

END_OF_DOCUMENT_TOKEN_TO_BE_REPLACED


Over the years, we’ve grown accustomed for various Chinese companies to release replica models based on famous supercars from Europe or America.

This time, things have taken a much nicer turn, as a group of students from the Xi’an University in China revealed an electric Bugatti Veyron replica.

They won’t target eco-conscious hypercar fans with the model though, as it was made completely from used cigarette packs, 10,280, to be exact.

The whole assembly weighs around 660 pounds and is powered by an electric motor. As you can imagine, this won’t go on sale anytime soon, as it was made to honor the World No Smoking Day, on May 31st.

END_OF_DOCUMENT_TOKEN_TO_BE_REPLACED

Dodge Viper-based Maybach Exelero replica can be yours for $680,000


Even though it didn’t achieve record sales, Daimler’s Maybach luxury brand really got the media talking with the stunning Exelero concept model (pictured above), commissioned by tire manufacturer Fulda.

Only one was made, so when it came to auctioning it off, it fetched around $8 million, presumably from an African diamond tycoon.

Now, for those who were bummed about not getting their hands on a Maybach coupe and who don’t want to order Xenatech’s 57S coupe version, are in luck. A company in Switzerland is now offering to create replica Maybach Exelero models, based on the Dodge Viper sportscar, of all things.

It will be powered by an 800HP turbocharged 8.3-liter V10 engine and boast 23-inch wheels. Interior and exterior options can be catered to the customer’s desire, but the starting price is around $680,000 (€550,000, to be exact). Interested in the offer? Then check out the official ad on JamesList.

END_OF_DOCUMENT_TOKEN_TO_BE_REPLACED

Ebay has always been a great source for pretty interesting cars. For example, earlier today we had the Mini Cooper S owned by former Playmate Sara Jean Underwood and now here’s another cool find. This Lamborghini Murcielago LP640 replica is based on a 2009 Pontiac Solstice roadster and it has a starting price of $63,244. Under the hood, there’s a 325 hp 4 cylinder engine which takes the face Lambo from 0 to 60 mph in 5 seconds. That’s pretty fast. I mean, not Lambo fast, but fast. I have to admit, the car looks pretty interesting, but I’d say it wouldn’t make any sense wasting that much money for a fake Lambo. There are tons of other awesome cars you could buy for that money. Also, check out two video after the jump.

END_OF_DOCUMENT_TOKEN_TO_BE_REPLACED 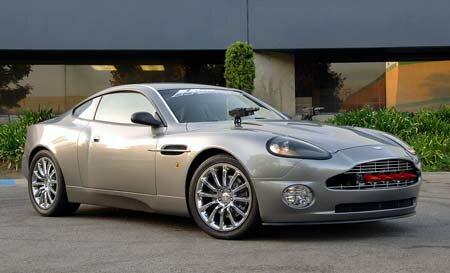 This is definitely something 007′s fans all over the world would love to own. This Aston Martin V12 Vanquish replica was built by the Canadian company Exclusive Motor Cars and was inspired by the car from “Die Another Day” movie. It has all the cool gadgets used by James Bond like hood-mounted machine guns or the retractable rocket launcher integrated in the front grill. What’s really amazing is that the car was built starting from a regular Ford Mustang, who received a stretched wheelbase, widened track, custom interior and 34 composite body panels that completely changed the car into what you see here.

What’s also interesting about the replica is that, even though we’re used to these replicas being built in individual enthusiasts or by companies as show cars, this particular one will be available in a limited run, for $100,000. It’s a lot, but if you really like James Bond and have enough money, I don’t see why you shouldn’t think of buying one. Imagine the look on everyone’s faces when you’ll pull out your rocket launcher at the traffic lights stop. Pretty cool, huh?

For more photos taken by the guys from Autoblog, check out their photo gallery.

END_OF_DOCUMENT_TOKEN_TO_BE_REPLACED

One of MAKE readers’, Proximacentuari, has created this incredible Ariel Atom replica, from scratch. Besides the huge effort he put in the project, 15 months and at least 800 hours of work in the garage, what’s really amazing is that a large amount of the vehicle’s parts came from junk or recycled stuff:

“The stainless panels all came from old appliances. The black body panels came from an ancient kayak and an old doghouse. The throttle pedal was made entirely from salvaged parts from a dumpster at an engineering firm around town. Of course, the engine was also recycled from a crashed car (Acura RSX).”

According to him, the car goes from 0 to 60 mph in 3.5 seconds and gets 35+ mpg. What can we say, except congrats to him for his work and we definitely admire his creation.

You can see more photos of the car on Proximacentauri’s Flickr profile.

END_OF_DOCUMENT_TOKEN_TO_BE_REPLACED

If you’re a Star Wars fan, you’ve gotta love this. Created by Daniel Deutsch in his garage, this is a full size replica of Luke Skywalker’s famous Landspeeder. Built on a custom aluminum chassis, the car is powered by an electric motor that is able to take the car to a top speed of 25 mph and that can travel for several miles on a single battery change. Of course, this is not impressive, but who cares, the vehicle is awesome. Unfortunately, if you want it, you’ll have to built it on your own, because Daniel says that the Landspeeder is not for sale. But you can get more details here.

END_OF_DOCUMENT_TOKEN_TO_BE_REPLACED

No money for a Reventon? Get a Veno!

The Lamborghini Reventon is exclusivity taken to the extreme, only 25 ever made, each with a price tag of €1 million, and has been sought after by a lot of car enthusiasts which have the spending power to buy it. Well polish supercar manufacturer Veno thought that there might be a market for all those who didn’t get to buy a Lambo, and came up with this replica after the italian model.

Sure, the company said it has taken the design from jet aircrafts, and that it represents the hard work of their design team (who probably just searched Google for images of the Reventon) and that the quality of the supercar will match and even overcome producers like Ferrari, Lamborghini, Pagani or Koenigsegg. The engines available will be taken from Audi, their 4.2 litre V8, with three versions, capable of delivering 350, 450 and 700 HP, and later on, customers will be able to equip it with engined taken from the Corvette C6, including the one from the Z1, a 6.8 litre V8. Other tehnological innovations include carbon fiber used in most of the body parts and in the brake discs, a night vision camera capable of detecting pedestrians or onboard computer with access to wireless Internet. Plus, their green department has stated that the company is currently experimenting with an electric powered version, equipped with the newest generation of high performance batteries.

Although they said that about 50 cars will be made, I’m sure once that Lamborghini’s lawyers find out about this car, they’re going to have a field day. Until then, feast your eyes with their fruits of “hard labour”. One more photo after the jump. END_OF_DOCUMENT_TOKEN_TO_BE_REPLACED

Sure, a lot of people have come to love Batman, partly due to the great success it had with the latest two films, Batman Begins and The Dark Knight. But Bob Dullam has taken his passion for the Capped Crusader to new heights, building a life size working replica of Batman’s current vehicle of choice, the Tumbler. Sure, you may think that it wasn’t that hard if you have the blueprints and schematics at hand, but Bob didn’t have those things, building the vehicle from scratch, after pictures taken from the Internet.

It wasn’t an easy build, nor a cheap one, the costs taking him at about $60,000. But he didn’t stop at building the Tumbler, he also made a Batman costume to go with the car, and has also said that he will begin working on the Batpod, which also starred in the two films. So if you see this car in your rear-view mirror, rest assured that Batman is watching over you

McLaren Formula 1 car made from matchsticks

Ok, I gotta admit that my first reaction when I saw this was “Wow!”. It’s a McLaren F1 car replica made from an impressive 956,000 matchsticks. This is the work of Michael Arndt and it took him 6 years and 1686 tubes of glue to finish it. It cost 6000 Euros and can be broken down into 45 separate parts to move it around easier. However, after reading that, one question bothers us: “Why?”. And we still haven’t gotten our answer so, if you have any thoughts, please do share.