Ford has unveiled a couple of days ago a special edition of its iconic Mustang which will only be available in Japan. Dubbed “Mustang V6 Sport Appearance”, customers will be able to choose from one of the two colors available: Grabber Bluer or Performance White. Both of these liveries will come with special pin stripes on the hood bump and on the sides.

In addition, the car features a rear boot lid spoiler and sits on chromed alloy rims that measure 18 inches. These wheels are wrapped around big 235/50 R18 tires. Inside the cabin, Ford has fitted this special edition Mustang with leather seats.

This package is available for both the coupe and convertible models, the ones powered by the V6 3.7-liter engine which in the Japan specification produces 309 hp and has a peak torque of 278.8 lb.-ft (378 Nm).


In 2011, Italy celebrates 150th years since the unification and in order to celebrate this important milestone, Fiat has revealed a lot of anniversary editions for most of its models. Their latest one is a South Africa-only Fiat 500 special edition.


Dubbed the 150th, customers will be able to choose from one of the three colors available: Funk White, Pasadoble Red or Bossa Nova White. The cars will get bespoke 15-inch alloys and special badging.


As far as the interior cabin is concerned, the Fiat 500 150th limited edition gets two-tone sport seats, special floor mats and an updated instrument cluster.


Fiat is going to make only 28 units of this model and the starting price will be R152, 480 (including taxes).


The French automaker has decided to replace the old ENVY model with the Sportium Special Edition variant of the 107 that adds more fun and style to this tiny car while at the same time makes it more fuel efficient and eco-friendly.

This special model is based on the 107 Urban variant and comes with a frugal 1.0-liter gasoline engine that is linked to a 5-speed manual transmission. Fuel consumption stands at 62.77 mpg UK while CO2 emissions are 103 g/km, which means that in the first year, the VED tax will be free and after that it will cost you only 20 pounds per year. If this 107 is used as a company car, it will fall in the lowest BIK rate bracket at only 10%.

Customers will be able to choose from one of the five colors for the exterior finish: Electra Blue, Zircon Grey, Diamond White, Citrus Yellow and Laser Red. The 3-door model will set you back 9,945 pounds while the 5-door costs 10,295 pounds.


Car manufacturers have figured out that these special editions sell like cup cakes and the latest manufacturer to roll out one is Citroen with its DS3 Grey Matter model. Featuring a matte grey exterior paintjob, this stylish model comes with chrome accents on the doors, mirrors and tailgate. It also sports a contrasting roof (in white or black) and funky color-matching 17-inch alloy rims.

On the inside, nothing much has changed in comparison to the regular model except for the new Mistral leather upholstery along with the MyWay Select comfort package that comes with GPS, premium audio system and automatic climate control.

Prices for the Citroen DS3 Grey Matter start from 23,400 Euros and the French automaker has announced that they will build only 750 units.

Yet another special edition of the BMW M3 will be reaching the Chinese market in the future. This time, it is the M3 Carbon Edition that follows the M3 Matte Edition, which was introduced just a few months ago.

The new one has a bespoke look with a black-painted grille, a front bumper that has black carbon accents, side body stripes, along with a new set of 19-inch alloy rims. Inside the cabin, there is two-tone leather upholstery, special badging (of course) and carbon fiber trim.

BMW will make only 111 units of this M3 Carbon Edition and prices start from 1.23 million yuan.

You probably know that Fiat’s Bravo model hasn’t been successful at all. The company latest attempt to boost sales is this “MyLife” version that brings some mild styling updates, more standard features and an attractive price tag. Looking at its exterior, we notice the glossy black finish for the upper and lower grilles, the fog light framings, chromed door handles and a new set of two-tone 16-inch wheels.

This version comes as standard with the company’s Blue&Me infotainment system that packs Instant Nav satellite navigation system, Bluetooth phone connection and a USB port. The GPS sports a generous 6.5-inch display and contains the map of Europe. The driver can control the car’s infotainment system through the buttons installed on the steering wheel or by voice.

Customers can also opt for a T-Jet 1.4-liter that produces 120 hp or a more powerful 1.4-liter Multiair Turbo that delivers 140 hp and has the start/stop technology.

The car can be already ordered in Italy.

In 1976 Volkswagen launched the first generation of its famous Golf GTI model. Since then, there have been two anniversary editions, the GTI Anniversary Edition 20 and 30. 2011 marks the 35th anniversary of the model and VW has decided to celebrate it by rolling out this Golf GTI Edition 35. As you probably figured it by now, it comes with 35 hp more than the standard GTI, for a grand total of 235 hp.

Other additions include the restyled front bumper, the branded aluminum door sills, along with several “35” badges. If you order this model, you’ll also get a high-quality metal key ring.

The car will get its official debut at the start of June, during the 2011 Tuning World Worthersee. It will go on sale soon after that, for a base price of 30,425 Euros in Germany.

Kia will soon roll out a special “Hamster Edition” that celebrates the company’s popular “This or That” commercial. The model comes with black exterior graphics, a spoiler in the back and cool 18-inch alloy rims.

No information about the price list, but we know that it will hit the U.S. dealerships later on this spring.

PS: Who would ever buy such a thing? As if it wasn’t enough that the regular model is odd-looking…

One of the few Porsche models that I really like is the Cayman. After they’ve released the Black Editions of the Boxster S and the 911, the German automaker has decided to role one for its sexy Cayman model. Over the standard model, the black one offers 10 hp more from its 6-cylinder 3.4-liter engine that now develops 325 hp (330 PS / 243 kW) @ 7,400 rpm (200 rpm higher in comparison to the regular model) and 370 Nm (same as before).

Other goodies include the 19-inch rims from the Boxster Spyder, covered by 235/35ZR19 rubber (front) and 265/35ZR19 (back). As standard, the car comes with bi-xenon headlights, black leather seats and a new Sport Design steering wheel. The door sills now feature a stainless steel “Black Edition” badge.

In Germany, the Porsche Cayman S Black Edition has a base price of 67,807 Euros, including VAT, while in UK, the price starts from 50,420 pounds.

Mitsubishi Says Goodbye To The Eclipse With Special Edition Series

The original Mitsubishi Eclipse was launched back in 1989 and its 4th generation went into production in 2006. The Japanese automaker is preparing to say goodbye to its Eclipse model with a SE Special Edition series. All of the trim levels (GS, GS Sport and GT) are going to be available as a special edition version, featuring 18-inch dark finish alloy rims, black side mirrors, along with the standard features that you would normally find on the GS Sport versions for both the coupe and the convertible models.

As standard, you get leather upholstery with heated front seats and a power-adjustable driver’s seat, along with heated side mirrors, rearview camera, Bluetooth, and a powerful 9-speaker / 650-watt Rockford Fosgate audio system with SIRIUS satellite radio. In addition, the coupe version also packs a sunroof.

The Eclipse Special Edition is going to be available with a choice of two engines: a naturally aspirated 4-cylinder 2.4-liter that outputs 162 hp, available for the GS/GS Sport models, and a more powerful V6 3.8-liter engine that produces 265 hp, for the GT model, which is going to be linked to a 5-speed Sportronic automatic gearbox, allowing the driver to change the gears manually when he wants to. The Eclipse GT SE will also get an automatic climate control system. 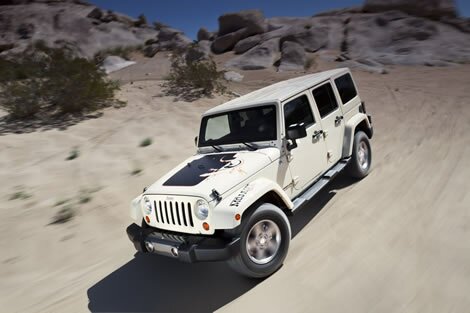 Jeep brought to this year’s edition of the New York Auto Show a special edition for its iconic Wrangler model. Dubbed “Mojave”, it was named after the western desert Mojave Trail and features a lot of goodies, both inside and out. 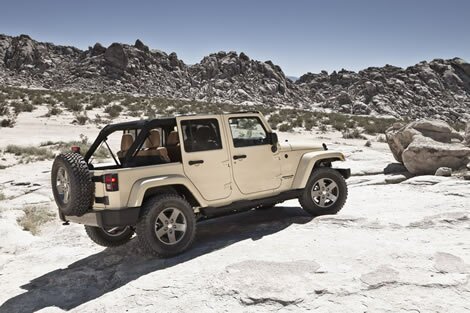 Based on the Sport version, it features a desert theme with a body-color hardtop, along with fender flares, lizard decals on the bonnet and rear, and the Sahara model’s side steps. The car sits on 17-inch rims covered by massive 32-inch tires, giving it a very rugged look. In addition, it packs taillamp guards and a black fuel filler door. It will be available in Black, Bright White and Sahara Tan hues. 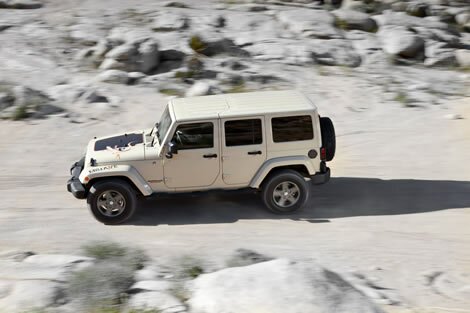 As far as the inside is concerned, this special edition features dark saddle leather with a lizard logo that has been embossed on the seats, along with a front-passenger grab handle, door-handle inserts, steering-wheel spokes, bespoke driftwood surrounds on the air vents, as well as overhead grab handles and Mopar tread pattern slush mats. 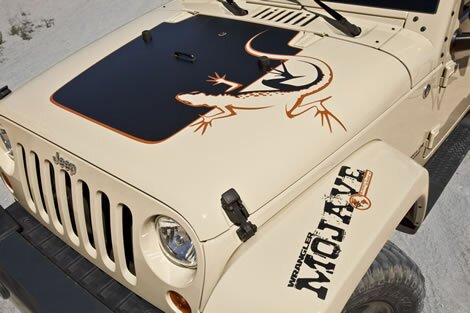 Set to hit the U.S. dealerships this June, the Jeep Wrangler Mojave will have a base price of $29,195, without the $750 destination fee. 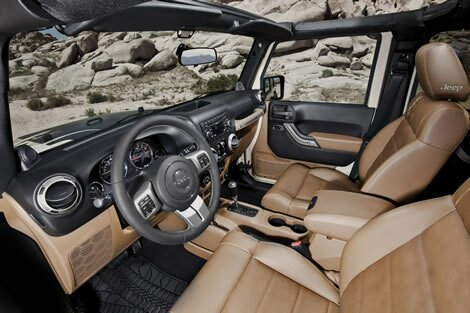 For celebrating its 100th anniversary, Chevrolet will launch a special edition Corvette, dedicated to racing driver and entrepreneur, Louis Chevrolet, the company’s founder. This special edition comes with a special coat of “Carbon Flash” black paint and a couple of logos on the B-pillars.
END_OF_DOCUMENT_TOKEN_TO_BE_REPLACED

The Volvo C30 is one of those cars that you either love or hate. While some like the hatch design, others think that it is a little bit to awkward. With the help of this special edition, Volvo hopes to boost up sales for this model.

Named the C30 Black Design, Volvo is going to make only about 600 units of this special edition and all of them are going to be available for the Italian market. It sports a 3M carbon-look film on the roof, wing mirrors, grille surround and on the pillars. In addition, the car sits on matte black-painted 17-inch (18-inch are also available) rims and has a specially trimmed cabin with an individualized dedication plaque.
(more…)

Good news for those of you that live in the UK. It seems that Subaru is offering its Impreza WRX STI model with extra oomph under the hood and a satellite navigation system as standard, with no additional costs. This means that for a limited period of time you will pay the same price tag of 32,995 pounds but get more for your money.
(more…)