The high-end version of the Suzuki swift lineup has arrived in the United Kingdom and it is scheduled to go on sale next month for 13,500 pounds. The Sport version of the Swift is motivated by a 1.6-liter VVT Euro 5 compliant gasoline engine that produces 136 hp and a peak torque of 118 lb.-ft (160 Nm) available at 4,000 rpm. This engine is mated to a newly developed six-speed manual gearbox that sends the horsepower to the wheels in the front.

According to the Japanese automaker, the car needs 8.7 seconds for the 0-62 mph sprint, before hitting a top speed of 121 mph (195 km/h). The fuel consumption is rated at 44.1 mpg UK (36.7 mpg US). It comes with a modified steering system, a stiffer suspension setup and rolls on beefier 17-inch alloys that are wrapped around in 195/45R17 tires to enhance handling.

The sportiest Swift comes with an attractive aerodynamic package that has a specially developed front bumper, a glossy black grille, a roof spoiler, revised rear bumper and more aggressive side skirts. In addition, the diffuser is more prominent while the tail pipes are bigger in comparison to the regular Swift.

Inside the cabin, the 2012 Suzuki Swift Sport has sports seats that are covered in a bespoke model fabric, while the steering wheel has a three-spoke design. Some of the standard goodies we should mention include seven airbags, ESP, Bluetooth, cruise control, push button start, fog lamps, air conditioning and HID projector headlamps with headlamp wash.

This petite city car is motivated by a tiny new Suzuki R06A 0.66-liter, 3-cylinder engine that comes with the stop/start system borrowed from the 3rd gen MR Wagon. This power unit is capable of developing 52 hp @ 6,000 rpm and a maximum torque of 46.5 lb.-ft (63 Nm) at 4,000 rpm. The horsepower is sent to the wheels in the front via the continuously variable transmission.

Suzuki Regina set to make an official debut in Tokyo

What we have here in this article is the Regina concept which previews a new city car that will be slotted below the Swift in Suzuki’s lineup. The car will make an appearance later on this month at the Tokyo Motor Show which will be organized at the Makuhari Messe convention center in Chiba City, Japan.

According to Suzuki, the Regina weighs only 1,609 pounds (730 kg) and has a drag coefficient 10% less than the current models in this segment. Even though that this concept doesn’t have a powertrain, the carmaker has mentioned that with a conventional gasoline engine, the Regina is able to return 72.3 mpg (3.1 liters / 100 km or 32 km/lt in the JC08 test cycle), while the CO2 emissions would be of 70 g/km.

This concept reminds us of the original Citroen DS and it measures 3,550 mm long, 1,630 mm wide and 1,430 mm tall, while the wheelbase measures 2,425 mm. The interior cabin has enough room for four people which sit in a very minimalistic ambiance dominated by various shades of green.

One of the most interesting concepts that we will get to see at the upcoming Tokyo Motor Show will be this Q-Concept developed by Suzuki which looks a lot like a toy. We’re dealing with a very small city car that measures only 2,500 mm long, 1,300 mm wide and it is 1,650 mm tall.

According to the Japanese automaker, the car offers “an entirely new kind of mobility” while inside the cabin it can seat two people in a tandem configuration, but the rear seat can be removed for more cargo room.

The tiny concept is motivated by an electric motor that allows the car to hit a top speed of 37 mph (60 km/h) while the driving range is up to 31 miles (50 km).

After a month since Suzuki revealed the first official photo of the new Swift Sport, we know have all the juicy details about the car, along with a bunch of photos taken during the first day of this year’s Frankfurt Motor Show. When you first look at it, you’ll probably say that it looks like the standard version that has been going to the gym. The front fascia has a brand new grille and bigger air intakes. At the back, you’ll notice the two exhausts and the diffuser.

The entire horsepower is sent to the front wheels through the 6-speed manual transmission which has been created especially for this model. Regarding the rear suspension, it has been revised with greater toe as we all camber rigidity. In addition, for improving the stability of the car, Suzuki installed larger wheel bearings. The car promises to provide better handling thanks to the increased front & rear spring rates plus added rebound springs.

The 2012 Suzuki Swift Sport will be manufactured along with all of the other models in the Swift lineup at the company’s plant located in Hungary. Sales will commence in Europe this October at a yet undisclosed price.

The 2012 Suzuki Swift Sport will make its official debut next month during the Frankfurt Motor Show but the automaker decided to reveal the first official photo of the car, along with some juicy details. The car looks just about the same as the concept we saw back in March at the 81st edition of the Geneva Motor Show which can only be a good thing.

The company stated that the Swift Sport will have “more responsive handling” thanks to the fact that it is going to feature an all-new rear-suspension design as well as internal rebound springs in the struts. Some of the other goodies that we should expect include the ESP, seven airbags and an impact-absorbing body.

This year’s edition of the Pikes Peak International Hill Climb was won by Nobuhiro “Monster” Tajima, for the 6th consecutive time, rounding up the total victories to 11 since the first one which occurred back in 1988. The hill climb master drove a specially-adapted Suzuki SX4 that was powered by a V6 3.1-liter turbocharged engine that generates 912 hp (924 PS / 680 kW) and a peak torque of 656 lb.-ft (890 Nm).

In the final leg up of the popular course, he had to face some problems coming from a sudden loss of power steering and a blow radiator but in the end managed to hold on to the first place. What’s even more impressive is the fact that he is the first driver who breaks the 10-minute barrier, finishing the climb in 9 minutes and 51.278 seconds.

It looks like this is the week for rumors as another one surfaced the Internet today about two new Suzuki models that will have their official debut at the upcoming New York Auto Show. Our colleagues from WCF believe that one of these cars might be the Kizashi Turbo, based on the concept previously showcased which had a 2.4-liter engine that developed 290 hp (294 PS / 216 kW). The car had a trunk-mounted spoiler, 19-inch alloy wheels and an updated suspension.

We’ll have to wait until April 20th to find out which are the two new models. 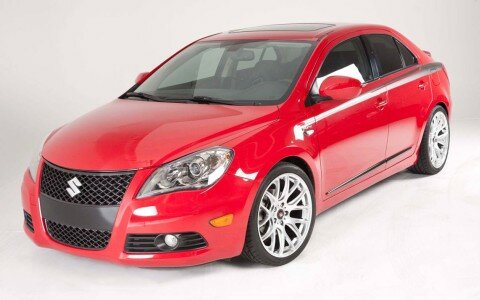 The Suzuki Kizashi is one interesting sedan, but while its regular versions might not demand much respect, people were awaiting something a bit more exciting when the Kizashi Sport was revealed. Sadly, that didn’t happen, as the model developed just 185 HP.

Now, the crew at Road Race Motorsports decided to really upgrade the Japanese sedan, and have revealed the Suzuki Kizashi Platinum Edition.

The new model boasts a supercharger added to the 2.4-liter engine, which can take power output to either 200 HP or a more impressive 300 HP. The suspension can also be had in three stages, depending on what type of handling you want. 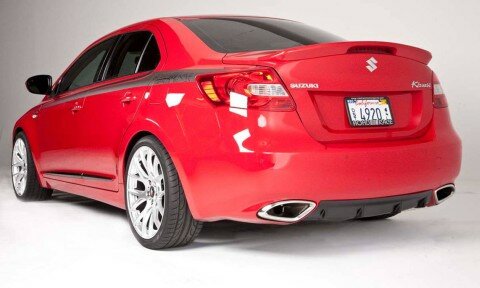 The exterior of the Kizashi has been upgraded as well, in order to reflect its newfound performance, with a dedicated body kit. 18- or 19-inch wheels can also be added, alongside various other upgrades that the customer might want.

The Platinum Edition performance package will be available from RRM or from select Suzuki dealerships.

END_OF_DOCUMENT_TOKEN_TO_BE_REPLACED


It seems that Suzuki UK really wants to appeal to the urban public, especially the younger demographic, and decided to release a special edition of its SX4 hatchback.

The Suzuki SX4 SZ-L, as you can see above, sports a black paint job (because that’s what young people like, right?) with gunmetal gray on specific things like the roof rails, wheels or grille. On the inside, Alcantara has been added, while contrast stitching is present on the leather-wrapped steering wheel.

Sadly, the SZ-L doesn’t really pack any upgrades in terms of mechanics. It is powered by a 1.6-liter four-cylinder gasoline engine, which is mated to the five-speed manual gearbox. All of its power goes to the front wheels.


Last week, we revealed that GPS device manufacturer Garmin will recall some of its popular models due to a faulty battery which can overheat and even lead to a fire.

Some of those models were used as in-car navigation for certain Suzuki vehicles. At that time, the Japanese company said it will talk with Garmin and see which cars need to be recalled.

Now, a decision has been made. Owners of 2008-2010 SX4, 2010 Grand Vitara and 2009-2010 Equator will need to take their model back to the dealership so that a new battery may be installed in the Garmin GPS navigation device. In total, 20,692 vehicles will be called back to dealerships in the following weeks.

END_OF_DOCUMENT_TOKEN_TO_BE_REPLACED


We have a different type of recall now, as GPS device manufacturer Garmin has just announced that it will be calling back specific models due to a faulty battery which can overheat.

The models in question include the Nuvi 200W, 250W, 260W and a few from the 700 series. They were all equipped with a faulty battery which, in the right conditions, may overheat and even lead to a fire.

This also affects several in-car GPS systems that were made by Garmin for companies like Suzuki. The Japanese brand revealed that it is consulting with Garmin and will announce what cars will be recalled in order to fix their GPS systems.

If you want to find out if your device is affected by this recall, check out Garmin’s official website.

END_OF_DOCUMENT_TOKEN_TO_BE_REPLACED


You know what car would be perfect for a Bonneville land speed record attempt? The Suzuki Kizashi!

That’s what the guys from Road & Track believed, as the magazine went to work, with the help of customizer Richard Holdener, on a tuned Kizashi that would break the speed record on the famous salt flats of Bonneville.

As such, with an overhauled four cylinder engine and a turbocharger capable of blasting 16 pounds of boost, the Suzuki Kizashi reached an impressive 203 mph, and now holds the land speed record in the Blown Gas Coupe category.

Check out the two record breaking videos after the jump.
(more…)


The Suzuki Kizashi has been around for a pretty brief amount of time, but a recall has already been issued by the Japanese company for its sedan model.

It seems that one of the doors from a lower center box on the dashboard has a faulty mechanism which, in the case of an accident, may cause it to swing open. As you can imagine, given the right (or actually wrong) circumstances, this can cause some serious injuries.

As such, all 2010 Kizashi models, manufactured between October 13, 2009 and May 31, 2010, will be called back to dealerships, where a new door mechanism will be installed, free of charge.

END_OF_DOCUMENT_TOKEN_TO_BE_REPLACED

The models in question have a problem with a plastic tension adjuster pulley, encased in the power steering assembly. It seems that in severe heat, the plastic pulley may deteriorate and eventually fall to pieces. This would make steering much more difficult, especially considering the size of the Japanese SUVs.

Customers will be notified as soon as possible, and a free replacement for the pulley in question will be added in dealerships, free of cost. For more details, you can contact Suzuki at 1-800-934-0934.