The U.S.-spec 2012 Toyota Prius c made its debut last month during the Detroit Auto Show where the Japanese automaker said that it will have a base price of less than $19,000. A few days ago they’ve unveiled the price list for the car and indeed it will cost less than $19k. The cheapest version of the Prius c (Level One) will set you back $18,950, but this doesn’t include the $760 for delivery & handling.

The car is scheduled to go on sale next month and it is going to be available in four grade levels. Level Two costs from $19,900, Level Three from $21,635 while the high-end Level Four costs $23,230 and comes with 15-inch, 8-spoke alloy wheels, color-keyed heated power outside mirrors with turn signal indicators, Softex-trimmed heated front seats and integrated fog lamps. 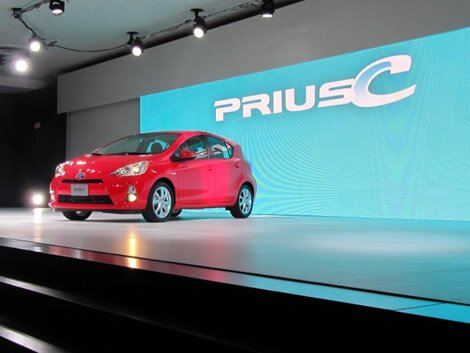 The Japanese automaker Toyota has officially unveiled the Prius C compact hybrid hatchback at this year’s edition of the Detroit Motor Show. This is the fourth member in the Prius family and will be the most affordable hybrid from Toyota, with a base price tag of less than $20,000.

The car is considerably smaller in comparison to the mid-size Prius hatchback and Toyota expects that it will have a combined EPA rating of 50 mpg. The automaker is highlighting the C’s 53 mpg EPA rating which is the highest one among non plug-in cars commercialized in the United States. Its highway rating is of 46 mpg, which means that the combined rating is 50 mpg. 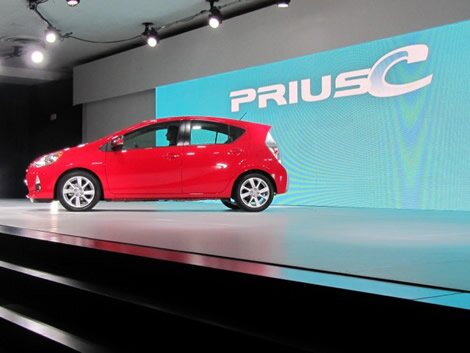 Toyota has said that the new Prius C is a subcompact model and it is 19 inches shorter in comparison to the regular Prius hatchback, almost 2 inches lower and 2 inches narrower. It will also be more than 500 pounds lighter than the standard Prius hatchback. According to the automaker, every single element of the Hybrid Synergy Drive system has been redesigned in order to lower the weight and the size of the parts. This more compact hybrid system is also implemented in the European version of the Yaris Hybrid.

The company has installed the fuel tank and the nickel-metal-hybrid battery pack under the rear seat, allowing for a deeper rear load bay in comparison to the one available for the bigger Prius hybrid which has its battery pack located under the car’s rear deck. According to Toyota, the C is capable of offering 17.1 cubic feet of cargo. 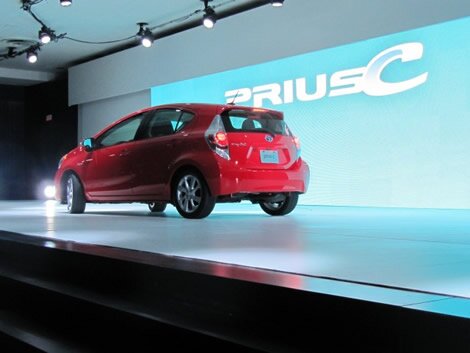 Toyota’s new model features an Atkinson Cycle 1.5-liter gasoline power unit that generates 73 hp and comes with a 60 hp (45 kW) electric motor-generator, which means that the total output is of 99 hp. Just like all of the recent Prius models, the driver of the C can switch between Normal, Eco and EV drive modes. At speeds of up to 25 mph, the 2012 Toyota Prius C can travel for less than a mile.

Scheduled to go on sale this spring, the car will be available with four different trim levels, while the cheapest model will set you back somewhere around $19,000. As standard, the car will feature a generous 3.5-inch color TFT information display, as well as iPod connectivity via USB port and Bluetooth hands-free mobile phone capabilities. 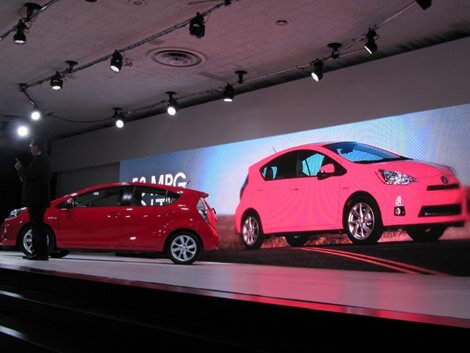 Also in the car’s standard configuration will be the automatic climate control, remote keyless entry, along with telescoping and tilting steering wheel with built-in audio controls. Those who want extra goodies can get the Prius C with 16-inch alloy wheels, a navigation system and Display Audio with the company’s own Entune infotainment and connectivity system.

This week, Toyota unveiled the Prius c model which is just about the same as the JDM Aqua. The hatchback will get its official debut in January 2012 at the North American International Auto Show and Toyota thinks that it is suitable for “youthful shoppers seeking fuel efficiency, technology, and spirited driving dynamics.”

We don’t have that many details to share, but we do know that the Prius c measures 157.3 inches long, 56.9 inches tall and it is 66.7 inches wide. Some of the tech goodies include Bluetooth support, an optional Entune infotainment system and audio controls on the steering wheel.

The car is motivated by a 1.5-liter gasoline engine and a small electric motor. At the moment we don’t have any official specs, but according to a brochure of the aforementioned JDM Aqua that leaked online a few days ago, the combined output of the car is of 99 hp (100 PS / 74 kW). The car maker mentioned that the new Prius c model will be able to return more than 50 mpg (60 mpg UK or 4.7 liters / 100 km) in the city.

The journalists from Auto Express.co.uk have managed to publish a few photos of the upcoming Toyota Prius C, photos that were taken from a leaked Japanese brochure. As you can see, the production version of the model will be more toned down than the concept that the Japanese automaker unveiled back in January at the Detroit Motor Show.

The model that will debut at the Tokyo Motor Show in December will look quite similar with the bigger Prius and it will feature stepped headlights as well as clear tail lamps. As for the cabin, the centrally-mounted digital display and the steering wheel have been borrowed from the regular Prius.

From this brochure we learn that the Toyota Prius C is motivated by a 4-cylinder 1.4-liter engine and an electric motor for a total output of 99 hp. This horsepower is sent to the front wheels via a CVT gearbox. According to Toyota, the new model will be able to return 100 mpg on the Japanese test cycle so with the European standards it should do approximately 80 mpg UK. As for the CO2 emissions, these should be around 80 g/km.

According to a spokesperson from Toyota UK, the Prius C will not be available in Europe, at least not in the beginning. As you probably know, the automaker already has a small car in the form of the popular Yaris which in 2012 will get a hybrid variant. However, chances are that the Prius C, which is 5cm lower and 10cm longer than the new generation of the Yaris, will make it in Europe in the next years. Another Prius model that will arrive in Europe is the 7-seater Prius+ that will hit the dealerships in early 2012.