People are ingenious, especially the Chinese. Even if it is about recycling, creativity can take different forms. This time Transformers’ Characters were built from waste parts from old motor vehicles. It all makes sense: eventually those characters are originally motorcars, and it’s impressive how something so big can come out of something so small. It is nice how they have tried to rebuild important characters from car pieces and parts, and the result is quite cool.

The creations made of recycled auto parts are displayed at the Nanjing International Auto Exhibition. In my opinion, they look quite good and they try to communicate a “green” message.

Do you think this will have the wanted impact on the environmental problem?

A Transformer on American Idol

Before you see this video, I hate to say that I appreciate this young man’s commitment. He knows that the ability to entertain is as important as the actual musical talent one possesses and he’s not afraid to go to where no American Idol contestant has ever gone before. That and he’s still a 5 year old child inside, but then again, who isn’t?
We would like to share with you today the wonders of a singing Transformer, as seen by the American Idol jury and thousands of Youtube users.
If you like, don’t be afraid to click on that button below there.

PS: The guy actually built that himself. That’s so cool!

Michael Bay’s Transformers series is filled with car action and this means, of course, a lot of things can go wrong. Well, this is one of those moments. While filming in Washington D.C., on 3rd Street and Maryland Avenue, the famous yellow Camaro crashed into a police SUV and suffered some serious damage. The crash wasn’t in the script and according to FOX 5 the SUV was driven by senior explosive technician who was rushing to a nearby location to a call for a suspicious package and was using a different radio channel than the policemen who were securing the perimeter.

After the incident, the Metropolitan Police Department issued a statement saying that an investigation is on the way and that filming of the movie will be suspended in the meantime.

Videos after the jump. END_OF_DOCUMENT_TOKEN_TO_BE_REPLACED


GM is ready to once again fully endorse film maker Michael Bay and his next explosion-gasm movie, Transformers 3, which is currently in production around various cities of the world.

In that endorsement is included a new edition of the Bumblebee Camaro, which, in case you’re not familiar with the Transformers franchise, is the car form of Autobot (aka good robot) Bumblebee. Now, thanks to a few eagle-eyed paparazzi who were tailing Megan Fox, we have the first photos of the next Bumblebee.

Before you ask, that floral marking is just a watermark the guys at Megan-Fox.net added onto the image. Rest assured the next Bumblebee Camaro will sport some new racing stripes, which will continue onto the roof of the car, but also a fresh wing which won’t go unnoticed. Concept-style rear-view mirrors are still present on this model, reminiscent of the fact that the first Transformers saw Bumblebee take the role of the Camaro concept model.

Still, right before or after Transformers 3 hits, expect GM to release a Chevrolet Camaro Bumblebee Edition in order to capitalize on the hoards of people going to see the explosion festival which will no doubt be TF3.

END_OF_DOCUMENT_TOKEN_TO_BE_REPLACED

Ferrari 458 Italia set to become a robot in Transformers 3


Do you like Ferraris, big explosions, huge robots and hot chicks? Of course you do! That’s why this newest piece of information about the upcoming Transformers 3 movie will get you really excited.

The film’s director, Michael Bay, has just posted on his website that the movie, set to appear on July 1, 2011, will feature the talent of a new Autobot (those are the good robots, for those not familiar), which will take the shape a stunning Ferrari 458 Italia supercar.

No other data about the Italian Autobot was given, so we’re crossing our fingers and hoping that it won’t be a racial stereotype like what Transformers 2 did with two Chevrolet Spark-based bots. Either way, the movie is set to visit, and subsequently blow up, locations like “Los Angeles, Chicago, Washington DC, Florida, Texas, Africa, Moscow, and China,” according to Bay.

Among the real-life actors set to appear include Shia LaBeouf (boo!), Megan Fox (yay!) and even John Malkovich. The project is entering pre-production, so until next year, we’re going to have to wait a while until we’ll see a Ferrari robot.

END_OF_DOCUMENT_TOKEN_TO_BE_REPLACED

If we didn’t know better, we’d say Bumblebee (the famous Camaro from Transformers) is out of a job at Hollywood and has decided to make some money by promoting cars in Mexico. But it’s not the case, because a Mexican Chevrolet dealership found a new way to promote their cars: they took a man, dressed him up as Bumblebee and made him transform into a Camaro…literally. You have to see this! Enjoy!

END_OF_DOCUMENT_TOKEN_TO_BE_REPLACED

Transformers 2: Revenge of the Fallen opens 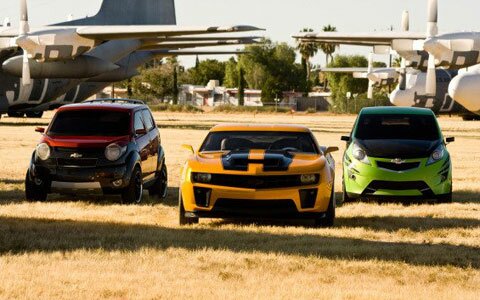 Yesterday I got invited by LG to a special premiere for bloggers of the new Transformers 2: Revenge of the Fallen movie. Though I wasn’t expecting it, the first movie was surprisingly entertaining so I had quite high expectations from this one too. And though the overall impression was that the movie could’ve been better (maybe because of the problems they faced), I really liked it. I mean we have cool cars (my heart started beating faster every time I saw the Camaro, it’s just an amazing car), we have Megan Fox, we have robots beating the s**t out of each other and we have some great special effects. What more can you ask from a movie. It’s not Oscar material, but it’s really, really entertaining.

Comparing it to the first one, the movie’s producers brought in several new funny robots, like the AutoboTwins Skids (Chevrolet Beat) and Mudflap (Chevrolet Trax) or Wheelie (a really funny toy car). Also, at the beginning of the movie there’s a Decepticon (for those of you who don’t know, these are the bad guys) which is an Audi R8 which is being cut in half by one of the Autobots. Like someone in the theatre said, it’s pretty ironic that the GMs always wins, but the company’s bankrupt.

Anyway, the conclusion is that if you feel like going to a movie that has some cool cars, great special effects and the smokin’ hot Megan Fox, you might really enjoy Transformers 2: Revenge of the Fallen. If you haven’t seen it, you have the trailer after the jump. END_OF_DOCUMENT_TOKEN_TO_BE_REPLACED

“Bumblebee” Camaro to be produced in a limited run

June 24 is the scheduled release date for the latest Transformers movie, Revenge of the Fallen. Without doubt one of stars of this movie, beside Megan Fox, of course, is Bumblebee, the Camaro which we all loved in the first movie. And apparently GM wants to make the most out of this event, because they’ve announced a special Chevrolet Camaro Bumblebee Edition, which will go into production from June 24 through December, with orders being taken starting with June 1.

We have no official info on the upgrades the car will get, but rumor has it that all we’ll see will be visual changes, such as the Rally Yellow paint job with the black stripes and Transformers badging for the wheel centers, sill plates, emborided console lid and for the interior. The ‘Bumblebee’ package will be available for the LT and SS models.

END_OF_DOCUMENT_TOKEN_TO_BE_REPLACED

Though you probably wouldn’t connect the two, it looks like the big mess GM is in is also affecting Hollywood, especially big budget productions. According to LA Times, GM, which is very close to bankruptcy decided to withdraw a large amount of the money which were suppose to go the Transformers sequel, ‘Transformers 2: The Revenge of the Fallen’. The decision came as quite a big hit for Paramount Pictures, because the Detroit carmaker was one of the key promotional partners of the movie. With a lot of hot movies coming this summer and without GM’s money, Paramount will definitely have to rethink the strategy for the advertising campaign to the Transformers 2, which hits cinemas on June 24.

“There’s so much competition out there for the entertainment dollar that studios and filmmakers really can’t open big, $100-million movies without the assistance of partner alliances that can help generate awareness and sell movie tickets,” said Norm Marshall, chief executive of NMA Entertainment, a brand marketing firm that’s been involved in movie “tie-in” campaigns for “Mama Mia!,” “Iron Man” and “Matrix Reloaded.”

END_OF_DOCUMENT_TOKEN_TO_BE_REPLACED

The Transformers 2 Volt is not the real thing?

On Friday we showed you the first photo and video of what everyone thought to be the production ready Chevrolet Volt. However, questioned by Inside Line, GM spokesman Rob Peterson said: “It’s obviously different from the original (2007 Chevrolet Volt concept), but this is not the final version at this stage. I’ve never seen that vehicle and I’ve never seen that color. You can tell it caught me off guard. I didn’t even realize it (the Volt) was out of the state of Michigan.”

The prototype we saw in the video matches the teaser photos released some time ago, so we can assume that Peterson was really caught off guard and didn’t know exactly what to say. On the other hand, Inside Line suggests that the Volt (which was on the set for a day or two and it’s not going to be a Transformer) is actually a Chevy Cobalt or Malibu in a Volt body shell and the real thing won’t be like this. So, if you thought that the Volt starts shaping up, actually things got even more complicated. Is that the real Volt, is that only a concept car, is Peterson BSitting us? What do you think? Drop a comment here.