A dispute which has taken place many times in the 100 meter race event at various athletic competitions like the World Championships or the Olympics, Usain Bolt (the current fastest man on earth) versus Asafa Powell (the former fastest man on earth) will be settled on the tarmac it seems, as the two runners have decided to race in their personal cars, a Nissan GT-R for Bolt and a Black Series Mercedes-Benz CLK C63 AMG for Powell.

Don’t forget the fact that Bolt has already flipped his BMW M3, meaning that his driving skills might not be up to par with what is required for the powerful GT-R and that Powell isn’t known for being a very good driver. This all means that we’re in for a very spectacular race. It will take place this weekend in their native Jamaica, and be sure that we will let you know which athlete is fastest … in his car.

END_OF_DOCUMENT_TOKEN_TO_BE_REPLACED 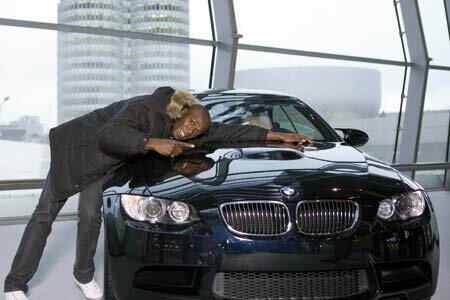 Last year, Olympic champion Usain “Lightning” Bolt” was given a brand new BMW M3 by his sponsor, Puma. Unfortunately, a couple of hours ago, the fastest man on Earth crashed his M3 while speeding on a rain-slicked highway. Bolt and a female passenger, probably his girlfriend, were taken to a local hospital but it seems they only suffered minor scratches and they were released shortly after. According to police Sgt. David Sheriff the car was heavily damaged and the two were very lucky to get away unharmed.

END_OF_DOCUMENT_TOKEN_TO_BE_REPLACED

Usain Bolt, the 22 years old Jamaican who blew the 100 metres world record (running the distance in 9,69 seconds) at this summer’s Beijing Olympic Games, had the chance to do a special test drive of the 420 hp BMW M3, at the BMW Vehicle Test Facility in Aschheim near Munich. He described the experience as being “fascinating” and we believe him, especially with him getting almost three hours of BMW Driver Training and than doing some laps under the professional guidance of a BMW driving instructor.

Bolt also said that he’s been in love with BMW’s ever since he was a kid, his uncle owning a BMW and taking little Usain for a ride every now and then. And his experience in Munich is not just a marketing move, a black M3 being ordered for the athlete by his sponsor, Puma, M3 which is scheduled to arrive in Kingston, Jamaica and to be handed over to Usain before Christmas.