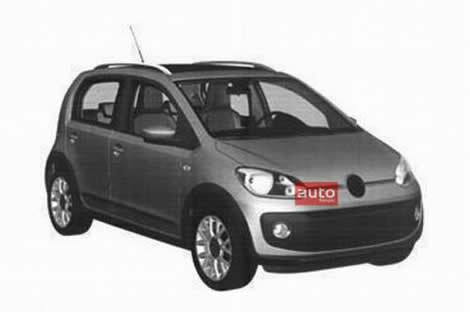 Revealed by the European patent office, this is the upcoming five-door version of the cute Volkswagen Up! The model was previewed by the interesting Cross Up! Concept and the production version will adopt a more utilitarian design with two new rear doors. 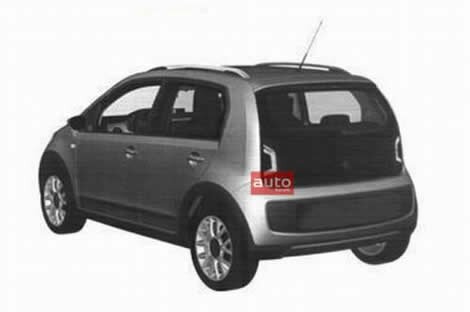 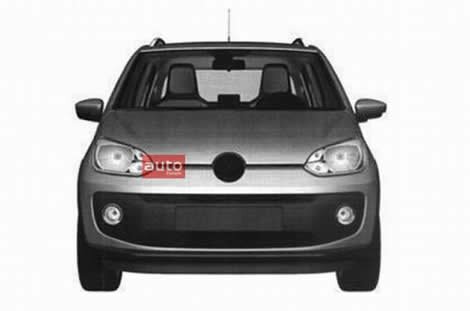 The German automaker has already confirmed that the car will make its debut later on this year so it should be officially revealed in the months to come. 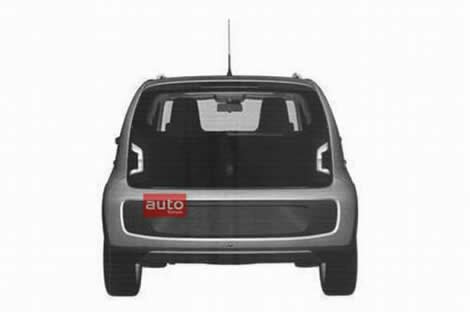 16 People Squeezed In The VW Up!

There is a common trend among automakers that launch small city cars to try and prove that these vehicles are very spacious. The latest example comes from Volkswagen who took 16 of its employees and stuffed them inside the recently introduced Up! model. Two of them were in the trunk, another one on the dash, seven of them on the back seat, two in the footwells under the dash and four on the front seats. What they did is pretty impressive since the VW Up! measures only 3.54 meters long and it’s 1.64 meters wide.

Other recent attempts we should mention include the one from last year when 20 students were stuffed in an original VW Beetle. Another example is from 2001 when not more than 27 students from Penn State Abington got inside a New Beetle.

Although this isn’t an original idea since car cramming started back in the 50s, this still remains a pretty efficient marketing idea that VW has implemented for the Up! which will go on sale in Germany on December 2nd.

Already available on order in the United Kingdom, the VW Up! costs from 7,995 pounds and you get to choose from three engines: two 3-cylinder 1.0-liter gasoline units and a BlueMotion version of the same. It is available in three trim levels, as follows: Take Up, Move Up and High Up, plus (of course) two special editions: Up Black and Up White.

The cheapest one, the Take Up, comes with the 59 hp version of that engine and as standard packs daytime running lights. The Move Up costs from 8,970 pounds and includes remote central locking, body-colored handles and door mirrors, electric front windows and AC. If you are willing to spare 360 pounds more, you can get the BlueMotion Technology Take Up that features a stop/start system to increase fuel efficiency from 62.7 mpg UK to 67.2 mpg UK. In addition, the CO2 emissions will be down from 105 g/km to 97 g/km CO2, which makes the Up! exempt from road tax as well as the London Destination Charge.

The High Up is available for 10,390 pounds and is fitted with the beefier 74 hp engine. It includes goodies like a leather-wrapped steering wheel, heated front seats, electric & heated door mirrors, plus the automaker’s “Maps and More infotainment” device. On the outside, it gets 15-inch alloy wheels and fog lights.

Those special edition Black and White versions we’ve mentioned are obviously the most expensive ones as they cost from 11,180 pounds and are based on the top-spec High Up. These come with bigger 16-inch alloys, stripes for the carpet mats and the upholstery, chrome door mirror caps, door side strips as well as a choice between a pure white metallic paint and a deep black pearl one.

The VW Up! is available exclusively as a three-door version and all of the three engines are mated as standard to a 5-speed manual transmission. Its five-door sibling will be launched in the second part of next year.

VW Brings To Frankfurt A Bunch Of Up! Concepts

Volkswagen has a lot of plans for its tiny Up! model as for this year’s edition of the Frankfurt Motor Show they brought not only the production version of the car, but also six brand new concepts which all appear to be quite interesting.

The first one that we want to talk about is the GT Up! that the German automaker says that they might make a production version out of it. If so, it will probably have a 100 hp engine, which is a good 25 hp more than the most powerful Up! that will be available when the car hits the dealerships. It borrows a few styling ideas from the company’s GTI models, like the honeycomb grille, an aero kit, 17-inch alloys and an updated interior cabin.

The second one is a crossover variant, dubbed Cross Up! The model previews the company’s 5-door variant of the car and looks very nice.

Another one would have to be the Up! Azzura for which the German engineers took their inspiration from the nautical world. It has been drawn by the famous Italian designers Giorgetto Giugiaro and Walter de Silva. As you can see from the above photo, there is no roof and no doors, while the cabin has four seats wrapped around in white/blue leather, a bunch of chrome parts and a dashboard finished in mahogany which has maple wood inlays.

Another version of the Up! is the EcoFuel model that is motivated by a 1.0-liter natural gas engine that fires 68 hp. It has been fitted with the company’s BlueMotion Technology which features a stop/start system as well as battery regeneration. Volkswagen mentioned that in 2012 they will launch a gas-powered version of the car but it will not come with the BlueMotion goodies.


More and more car manufacturers have decided to reveal the first official photos of the models that will get their official debut at Frankfurt Motor Show next month in Germany. VW is one of them and now we get to see the first photos of the production version Up! which has been previewed for a bunch of times in the last few years. It is indeed a small city car that looks excellent in my opinion, probably one of the best designs in the segment.


A major difference between those concepts and this production version is that the latter will come with a front-engine, FWD configuration, unlike the concepts which were rear-engined and with a rear-wheel drive setup.


When it will hit the market, the Volkswagen Up! is going to be available with an all-new tiny 3-cylinder 1.0-liter gasoline engine, which will have two output variants: 60 hp and 75 hp. Those who will get the car with the optional BlueMotion Technology will benefit from a combined fuel consumption of only 55.6 mpg (67.2 mpg UK or 4.2 liters / 100 km) for the 60 hp model while the more powerful one will do 54.7 mpg (65.7 mpg UK or 4.3 liters / 100 km). The German automaker mentioned that both these engines will have CO2 emissions of less than 100 g/km.


Later on, VW will offer the Up! with a natural gas power unit that will generate 68 hp (50 kW) and will have a fuel consumption of 3.2 kg / 100 km and CO2 emissions of only 86 g/km. Aside from this, an electric variant is also in the works but we don’t have any further information about it.


The car measures 3.54 m long and 1.64 m wide but thanks to its 2.42 m long wheelbase it should be able to accommodate four adults. It also will have a rather generous 251-liter trunk which is considerably more than what other cars in this segment have to offer. Folding the rear seats will increase the cargo room to 951 liters.


According to Volkswagen, the Up! is going to be the only car in its segment which will come with City Emergency Braking System which is in fact an active safety system that is activated when the car is doing less than 18 mph and uses a laser sensor in order to assess the risk of a possible accident. If the person behind the wheel has no reactions, the system will kick in, breaking the car in order to lower the force of the impact.


Aside from this, the city car will get a maps + more system which the automaker describes as being a mobile PID – Personal Infotainment Device. This system has been designed in collaboration with Navigon and is located above the center console. It is in fact a touchscreen display that can manage all of the Up!’s infotainment systems, like audio and navigation, along with displaying the car’s parking sensors.


We don’t have any details regarding the availability of the Volkswagen Up! or any info about the price tag, but we’re sure that the car manufacturer will release them next month at Frankfurt. Stay tuned for additional details.

Volkswagen Up! to appear on the market in second half of 2011


For those of you in the market for a small and efficient city car, you will be thrilled to hear that Volkswagen revealed that its new Up! model will begin production in the first half of 2011, and will be appearing on the European market, under both the VW and the Skoda and Seat brands in the second half of 2011.

The model is set to begin production at the Bratislava plant of the German company. VW will invest until then about €308 million, in order to satisfy all of the demands it is hoping to get. No word yet on an electric version of the Up!, one which has been highly rumored especially after the reveal of the E-Up! concept at this year’s Frankfurt Motor Show.

Are you excited about the Up! or are your views concerned with other small city cars? Leave us a comment with your choices.