The German aftermarket specialists over at Wheelsandmore have come up with a tuning program for the beautiful Aston Martin V8 Vantage, offering an increase of power, a new suspension, new wheels and other upgrades.

The standard output of the engine is rated at 420 hp, but by installing 200-cell catalytic converters along with a flip-controlled exhaust system, Wheelsandmore have managed to raise the power of the engine to 460 hp and a peak torque of 369 lb.-ft.

I’m really glad that they didn’t mess with the design of the V8 Vantage as this is one of those cars that looks gorgeous right off the production line.

The 2011 Mercedes-Benz CLS63 AMG is relatively new, but already there are a couple of tuning packages available for it. The first one was developed by Carlsson and delivers 600 hp, while the second one was created by Brabus and packs a whopping 730 hp. Wheelsandmore also came up with their own tuning program but they only managed to squeeze only 62 hp more from the engine, reaching a total of 580 hp and 575 lb.-ft of torque.
(more…)

If you remember, back in 2010 the German tuners from Wheelsandmore launched a very cool tuning program for the Bentley Continental, dubbed Ultrasports 702. They didn’t stop there as we have another Bentley Continental tuned out by these guys; this time it is the convertible model.

If you didn’t know, the standard model has a powerful W12 6.0-liter turborcharged engine and with the inclusion of an ECU upgrade mixed with a brand new handmade, stainless steel exhaust system along with a remote-controlled valve flap system, the engine now produces 702 hp (up from 621 hp) and 650 lb.-ft of torque (up from 590 lb.-ft). To stop efficiently, the Continental Convertible got the biggest carbon-ceramic brakes possible, measuring an incredible 16.54 inches.

The car now sits on a set of 3-piece C-Sport rims that measure 10.5×21 inches. The Continental also got an electronic lowering module that can raise or lower the car’s suspension by approximately 0.70 inches at a speed of maximum 44 mph. 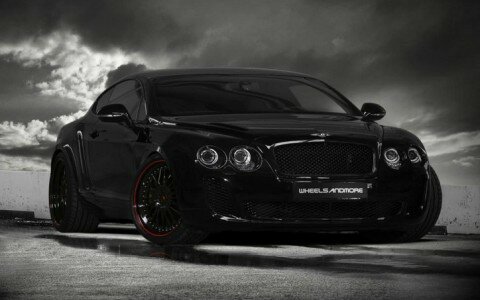 The Bentley Continental is one might impressive luxury sportscar. But seeing as how its top of the range version, the Supersports, ‘only’ extracted 620 HP from that massive W12 6.0-liter engine, the tuners at Wheelsandmore decided that a few upgrades might be in order.

So, after a bit of tinkering and adding things like an optimized ECU, a new exhaust system, a set of 21-inch, 3-piece modular wheels plus an electronically-adjustable suspension, the Bentley Continental Ultrasports 702 was born.

The new British luxury sportscar now develops a whopping 702 HP with 650 lb-ft of torque. Together with the other bespoke features, we’re pretty sure this package from Wheelsandmore will attract quite a few performance fans, not happy with the stock Supersports.

END_OF_DOCUMENT_TOKEN_TO_BE_REPLACED


While some tuning companies adopt some radical ideas for the cars they want to customize, there are cases when the work is tastefully done and the end result isn’t that different than the base model.

German company Wheelsandmore has brought such an example, based on the beautiful Aston Martin DB9 Volante. The team increased the stock power figures for the big 6-liter V12 engine, which developed 476 HP and 600 Nm of torque, and added an extra 60 HP and 68 Nm. This has been achieved through the classic ECU remap and a new stainless-steel sport exhaust system, outfitted with 200-cell sport catalysts and a valve control to control the noise.

A new body kit also decorates the car, which sits closer by 25mm to the ground, which is made out of polyurethane and consists of front and rear aprons, side skirts and rear lid spoiler. The name of the company hasn’t been forgotten, as a set of Kahn RS-V 20-inch wheels have been fitted and wrapped in Dunlop Sport Maxx sports tires.


Even though owning a Lamborghini can put you into a very exclusive company with various other rich people and famous celebrities, this doesn’t stop tuning companies from offering tricked out versions of the models from the Italian supercar maker in order to appeal to those who want an even higher degree of exclusivity.

This new project from Wheelsandmore is further testimony to this, as the team modified the rather exclusive Gallardo LP 560-4, taking the power to 620 HP and 785 Nm (580 lb-ft). Dubbed the YarroW, the new Gallardo was on the receiving end of a revamped ECU, a new carbon airbox, a stainless steel exhaust system with valve control, as well as an enhanced braking system and a coilover suspension. The engine kit costs €12,500 while the brakes are €13,998 and the suspension a measly €8,999.


On the outside, Wheelsandmore, as its name suggests, fitted a set of 20-inch wheels with 3-piece forged rims, offered in various color and surface options, wrapped in Dunlop Sport Maxx tires. They will cost “just” €11,400. The body kit, which wasn’t priced, includes things like a carbon fiber rear diffuser or side mirrors, while on the inside we can find various carbon fiber accessories.