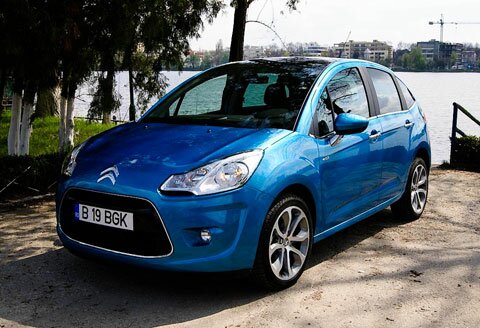 A week after we tested the Panzer tank which was the BMW 5 Series GT, we had the opportunity to try out a totally different type of model, the new Citroen C3. If the previous generation wasn’t really my cup of tea, the new one seems pretty chic, at least at first glance. But let’s see how it all went:

The first impression I got when I saw the new Citroen C3 was that it was smaller than the last gen, getting closer to the C2 (which makes sense, seeing as how the model has disappeared from the Citroen range). After checking the technical specs, I saw that things were actually quite the opposite, with the new C3 being bigger than its predecessor. But, even though it keeps the arched roof, it looks much better. 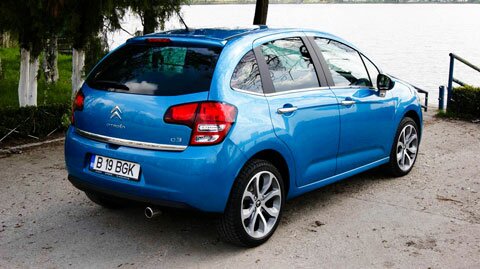 Also, throw in the Blue Belle-Ile color (the name wasn’t our idea) with the stunning Clover 17 inch wheels, and the result is excellent.

On the inside, there are two sides in terms of the equipment: the Zenight windshield and everything else. You may have heard about this new option, but what’s so great about it? It’s huge. It’s not like a regular windscreen as it is elongated, covering half of the actual roof. To put it in another way, it’s like the sunroof and the windshield decided that a strip of metal shouldn’t keep them apart and merged together. The Top Gear guys put it even better: after driving the Zenith-equipped C3, driving the rest of the cars feels like walking around with a hat on your head. At first, the experience is a bit weird, as if you look at the rear-view mirror it seems like it’s floating in mid air. After you get used to it, though, it’s stunning, to say the least. You don’t have to break your neck while looking for traffic lights or signs and you can just enjoy the ride. The only downside appear when the sun is too bright, as the car fills up with light and you can’t see a whole lot. In those cases, you can pull up the half of the roof, with sun guards and all, and the car turns back into a regular one. 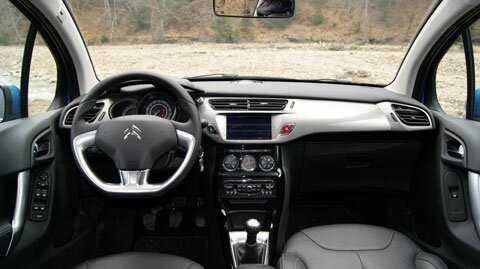 The other options include everything Citroen has best: automatic climate control, parking sensors, ambient perfume (so that you don’t need to buy tiny air fresheners, you just push a button and the car smells better), satellite navigation, a great HiFi audio system, leather seats plus a great and sporty steering wheel with a bit of flat bottom. The controls on the aforementioned steering wheel are a bit weird, at first, as they aren’t actually on it, but rather behind it. It takes a bit of time until you get used to it (I realized on my second day that it has such things), but once you grow accustomed to them, they’re quite practical. It’s not all Zenith sunshine and butterflies though, as the car lacked any … cup holders! Now we’ve grown accustomed to such a downside on BMWs, but we didn’t expect such a thing from Citroen. Another drawback is the instrument panel, which has a cheap look (you think stickers are glued to it) and the handbrake lever which is placed a little out of reach.

So, we have a small car with a gasoline-powered 120 HP engine. Sounds pretty good right? Well it pretty much is. Pretty much, though. I don’t know why, but when you see the actual technical specs, you would expect a bit more (the same feeling we got from the C4 by Loeb we had this winter). Still, on the open road, it’s a bit of a sloth and isn’t as responsive as you’d expect. This doesn’t mean it’s not any good. Quite the opposite. In the city, the car was pretty awesome. The steering wheel is extremely light (at one point you’ll actually be scared not to break it), and it’s coupled with a soft steering, which makes the C3 a joy in the city. I even tried (in completely safe conditions, of course) to drive it with just one finger. As I said, it was pretty awesome and I think, leaving all misconceptions behind, that it would make a great car for the ladies (nobody will break a single fingernail while maneuvering the wheel). 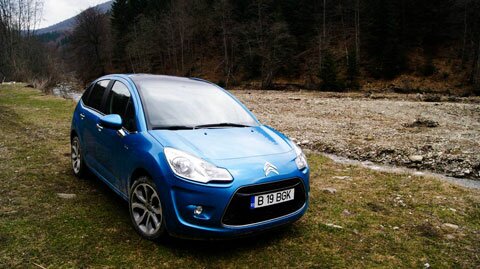 The new Citroen C3 isn’t so bad outside the city either. During overtakes, it has a certain jolt which makes all the difference and the suspension is quite comfy, even on gravel roads. We had the chance to take on some country roads and the C3 offered a much better ride than even a Saab 9-3, driven by a friend.

The new Citroen C3 is a brilliant city car (the steering and the wheel are great) and won’t embarrass you outside the urban environment, even on bad roads. If you want a sporty experience though, you might want to consider something else. Still, given its attractive looks, that might be a bit hard to do.

We liked:
- the Zenith windshield
- the outside looks (wheels, color, accessories)
- the steering and the wheel
- the handling

We didn’t like:
- not that sporty
- no cup holders
- not so great fuel average, especially if you’re into sporty driving.

As always, big thanks to Laura and Paula from Citroen Romania for all their help!