Here we are at the final part of our extensive article where we will conclude the top 50 of the worst cars in all history. If you aren’t up to date with the first 40, you will find the others parts here: 1, 2, 3 and 4. In the first parts we have seen them all: some big cars, some small cars, others were very beautiful, others not so much. Keep reading to find the other ten left; there are a couple of surprises.

Speaking of, you never thought that the Ford Explorer was eligible for this top. Most of you will disagree with the reason why we included it here. First of all, remember that the Explorer is the best-selling passenger vehicle in North America for over 14 years. It is a car very beloved especially by moms who enjoy picking up their kids with this popular SUV. The reason for including it is not because of the Firestone tire controversy as some of you might expect. The reason is because the Ford Explorer is responsible for setting United States on the spiral of automotive obesity that we are very much still contending it today. After the Explorer, cars got bigger and bigger as most of us believe that a big bad car is safer (which is not entirely true). We now have cars that haven’t heard about the term fuel-efficiency and some of them are just too big, like the Hummer, both the H2 and the H3.

The EV1 was introduced by General Motors back in 1997 and it was without exaggerating, a marvel of engineering. It was by far the best electric car of those times and it promised that pretty soon, electric cars will going to replace our piston-powered engine vehicles. First of all, the reason why it is worthy of a place here is because it didn’t live up to that promise as it was very expensive to make, the battery technology in the late 90s was nowhere near ready to replace our conventional cars. In addition, the EV1 was an uberlight 2-seater, not to the liking of the Americans.

While some of you make like the design, we hate it – the Plymouth Prowler was the project of mid 90s new powerful computer tools that were capable of high-zoot projects that in the past wouldn’t have recovered the development costs. The design of the Plymouth was inspired (or even stolen) by a retro-roadster design by Chip Foose and made this car look like a dry-lake speedster from the 22nd century. We mentioned hotrod, well it wasn’t. Packing a run-of-the-mill 3.5-liter V6 engine that churned 250 hp, it wasn’t fast at all. In addition, this power unit was linked to an automatic transmission, which means that it wasn’t able to lay down the requisite stripes of hot rubber. 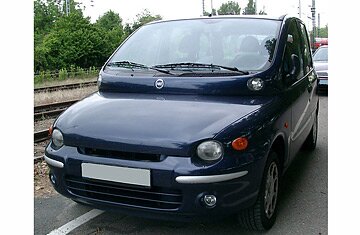 Here is in my opinion one of the ugliest cars in the world – the Fiat Multipla. The name was used by the Italian company for the first time in the 1950s and 1960s for a microvan which was based on the lovely 600 model. The one that was launched in 1998 was nothing like its predecessors. With its very strange front appearance that looks like it had several sets of eyes, the Multipla also had a very bulky cabin.

General Motors had the Hummer H2 while Ford had the Excursion, which was (and still is in production), a gigantic sport utility vehicle that is based on the firm’s Super Duty truck platform. It has a weight of 7,000 lbs and measures almost 19 ft. long and 6.5 ft. tall! Enough said.

Jaguar needed a car to compete against the Mercedes C-Class and the BMW 3-Series. Based on the Ford Mondeo platform, the company launched an entry-level model – the X-Type. In their struggle to turn a FWD compact car into an AWD sports sedan, the British ran smack into the limits of platform engineering. The car that resulted after this project is the British version of the Cadillac Cimarron, a financial disaster for Jaguar. The car wasn’t that bad but ruined the Jaguar name.

Here is another ugly car, the Pontiac Aztek. In the concept version, the car looked very cool but the production model was reduced to a bulky, plastic-clad automotive mess. The car was a pretty good crossover but judging by its appearance, you had to be pretty insane to buy one.

Here is another one that most of you will not agree with us, the BMW 7-Series. Why? Because of that annoying iDrive rotary dial/joystick controller located on the center console that made BMW owners pull out their hair. This thing was very hard to work with and sometimes, borderline impossible. Its second flaw was that awful-looking bubble butt. Other than that, the car was astonishing! Good thing that with the new generation they have redesigned the back of the car which looks great and they also updated the iDrive system.

We mentioned the Hummer before; it had to make it into our list. The H2 deserves a spot in our top because of its awful looks and the fact that it does about 10 miles per gallon. If you are looking for a road-eligible tank, the Hummer H2 is the solution.

The last car from our article is the Chevy SSR. Although Chrysler and General Motors are in the same town, the latter didn’t learn from the Prowler disaster. GM decided to make the Chevy SSR, which was an awesome-looking hotrod slash pickup that had a composite body as well as a cool convertible top. Due to the fact that the car borrowed the mechanicals and the chassis from GM’s corporate midsize sport utility vehicle program, the car was very heavy and underpowered, making it very lazy on the road. Although Chevrolet upgraded the SSR in the years to come, it was too late.

This concludes our extensive article about 50 of the worst cars ever made. We hope that you liked it.