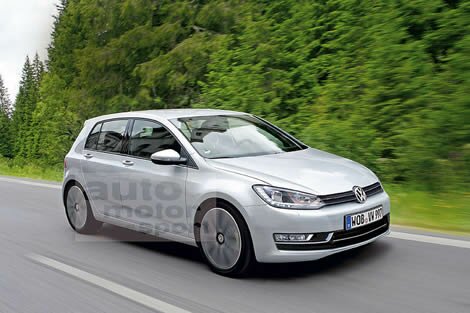 According to Auto Motor und Sport, the seventh generation of the Volkswagen Golf will be making its official debut later on this year at the Paris Motor Show which will be organized in September. The car is expected to be wider and longer than the current model and it will ride on the new MQB platform that was also used for the Cross Coupe concept.

The VW Golf 7 will have a sleeker styling with a lower roofline and steeply-raked windscreen. Some say that it will also adopt a sportier interior cabin that will feature a new instrument panel that will be angled towards the driver.

We don’t know what engines will power the Golf 7 but most likely we should see a wide array of gasoline and diesel units. According to various sources, the GTI version might get an upgraded 4-cylinder 2.0-liter that generates 220 hp (223 PS / 164 kW).

Auto Motor und Sport says that at the Paris Motor Show we should also see a new Porsche concept, the next-generation Mazda 6 and Skoda Octavia, along with BMW’s front-wheel drive van and the Opel Junior.