Ford Kuga Coupe in the works? 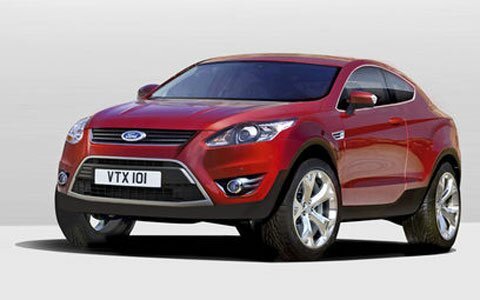 If these rumors are true, I think we’re looking at one of the coolest cars ever to leave a production line. I’ve already said several times in the past that the Ford Kuga is definitely one of the best looking small SUVs out there and if a coupe version that looks like this will ever go into production, I think I’ll be their first customer. According to Auto Express, Ford is currently considering the Kuga coupe, especially after the BMW X6 showed that a combination between an SUV and a coupe is a great recipe for success. However, the Kuga won’t go anywhere near the X6 in what concerns its pricing or running costs and that’s what makes me almost sure it will be a big hit.

Auto Express also reports that the car will probably not get four wheel drive, in order to achieve better fuel economy and emissions figures and under the bonnet we’ll get the same range of EcoBoost petrol engines from the upcoming Focus and a range of diesel powerplants, including a range-topping 197 hp 2.0 liter unit.

So, when will we see this car making its debut. Well, it seems that after Ford will launch the new Focus and C-MAX next year, there’s a high probability the Kuga Coupe will be unveiled sometime in 2011.

END_OF_DOCUMENT_TOKEN_TO_BE_REPLACED

Ford is expected to replace the Escape after 2010 and Automotive News reports that, when that will happen, Lincoln might also get a compact crossover based on the European Ford Kuga. “We do think that there is room for a smaller car in the Lincoln brand,” Derrick Kuzak, group vice president for global product development, said at a press event. He did not give extra details, but he added that Ford has no intentions of bringing the Ka microcar to the United States, though in July, he said that the Ka could be an “opportunity” for the United States.

END_OF_DOCUMENT_TOKEN_TO_BE_REPLACED

This is one of the first tuning programs for the new Ford Kuga and, to be honest, I’m a little surprised, because the car looks very good and I was expecting more tuners turning their attention to Ford’s crossover. Anyways, the program from Wolf include a power upgrade from 136 hp and 320 Nm to 158 hp and 375 Nm (795 Euros), a set of 20 inch Wolf Race alloy wheels (2,850 Euros), Wolf sport springs kit that lowers the car by 40 mm (199 Euros). The complete Wolf styling programme can be directly ordered from Wolf Racing, Neuenstein or from your local Ford dealer.

Check out more photos after the jump. END_OF_DOCUMENT_TOKEN_TO_BE_REPLACED

These are photos taken by us today, one day before the Geneva Motor Show press days, of the Ford Kuga, Ford’s crossover which will go on sale soon after the official debut, at the Swiss show and, as you know, the production already started a few days ago.

Based on Ford’s C-car architecture the Kuga will come with both front wheel drive and all wheel drive, while safety and handling are improved with Electronic Stability Programme (ESP) with combined Anti Rollover Mitigation (ARM), and ABS with Electronic Brakeforce Distribution (EBD). When sales will start, the Ford Kuga will be available with only one engine, a 136 hp 2.0-litre Duratorq TDCi mated to a six-speed manual transmission and with an estimated fuel consumption of 6.3 and 6.4 liters per 100 km.

Check out more photos of the Ford Kuga at the Geneva Motor Show after the jump.

Though the Ford Kuga will make its official debut at the Geneva Motor Show, Ford announced that the production already started, yesterday, at the Ford plant in Saarlouis, Germany. They plan to build around 45,000 Kugas each year, which is about 10% of the factory’s production volume.

Also, Ford plans to export around 84% of the produced Kugas in 32 countries, the largest markets being Germany, Italy, UK, France and Spain. We remind you that the Ford Kuga sales will start soon after the Geneva debut.

Ford released these photos of the production ready Ford Kuga, two weeks before the car’s debut at the Geneva Motor Show. Coincidence or not, the photos were taken in the Swiss Alps. Ford didn’t release any other detail, just these photos, so enjoy it!

Ford Kuga on display at the Geneva Motor Show

The Ford Kuga, which will be on display at the Geneva Motor Show, is Ford Europe’s first attempt at the crossover market. The car is based on the Iosis X Concept which was presented in 2006 at the Paris Auto Show. Back then, John Fleming, Ford Europe’s President and CEO, said that Ford will be showing a production-ready version of the Iosis X. So here we are, a year and a half after that, and the Kuga is almost out.

The Ford Kuga is based on Ford’s C-car architecture (used on the Ford Focus and the Ford C-MAX) and it will be available with both front wheel drive and all wheel drive, while safety and handling are improved with Electronic Stability Programme (ESP) with combined Anti Rollover Mitigation (ARM), and ABS with Electronic Brakeforce Distribution (EBD).

The Ford Kuga will be produced at Ford’s plant in Saarlouis, Germany alongside the new Focus three-door, five-door and wagon variants and C-MAX.